Almost three years ago, we started working on a game about five bubble worlds that accidentally become connected. Previously living in isolation, their inhabitants struggle to accept and understand each other’s differences and must come together to fight for a greater good.

Very early in the development process, we were intrigued by the idea of allowing players to use the terrain to attack their opponents and overcome challenges. As we tested different designs, we created a character that could push the terrain in different directions. Soon we realized that squeezing and crushing opponents by pushing the ground was one of the most satisfying parts of the game.

We began testing all possible ways of changing the terrain: twisting, rotating, pulling. The amount of gameplay variation multiplied with each new idea introduced. While some ideas worked really well, some completely broke the game and made it too hard to keep the characters balanced. With a complete set of unique abilities in place, we created level designs that made use of all the different ways in which the terrain could be changed.

As players travel through the bubble worlds, they can experiment with different ways of moving the ground to solve puzzles and progress through the different game modes: adventure and multiplayer. The adventure mode, which also supports couch co-op, trails a journey of discovery as the characters travel through the fantastical neighboring bubble worlds. It allows players to explore, learn, and master the game controls and ground bending mechanics.

Multiplayer battle race is a lively competition mode where up to 4 players can show off their skills as they go head to head at full speed, battling for crystals – and bragging rights. 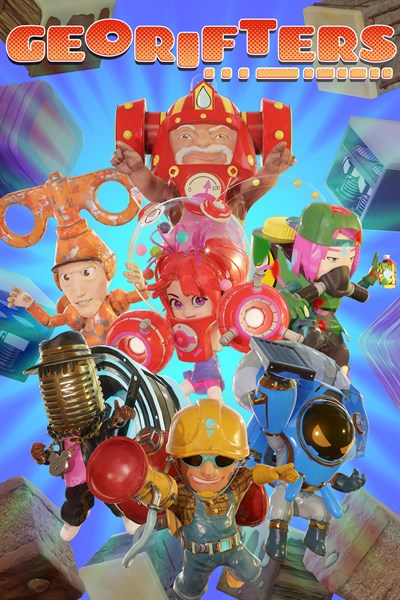 ☆☆☆☆☆ 1
★★★★★
Xbox One X Enhanced
The ground is your weapon in the fast paced battle arena of Georifters. Team up with or against your friends to punch portals, twist tunnels, flip lasers, and steal the ground from under each other using a unique arsenal of weapons and abilities in this ground busting adventure. Steal the ground right from under your enemies! or yourself! In “Georifters” you can spin walls, twist tunnels, crush critters, battle against the ground or with it! It can be your tool or a weapon you use to smash others in a series of fast paced ground busting arenas. Choose from a variety of heroes Dress them up (or down) and combine outfits to look fabulous on your way to victory. Duel it out in a variety of exhilarating multiplayer modes Up to four friends or strangers can show off their skills as they go head to head at full speed, battling for victory, for honor – and of course bragging rights. More thinker than a fighter? No worries! Try some precision ground manipulation in co-op, against a friend, against an enemy, or a friend who is your enemy, or if you don’t have any friends or enemies (good for you!) you can go lone wolf in the story mode. Bust your way through 7 fantastical worlds 30+ levels, 300+ stages, each based on a unique theme.