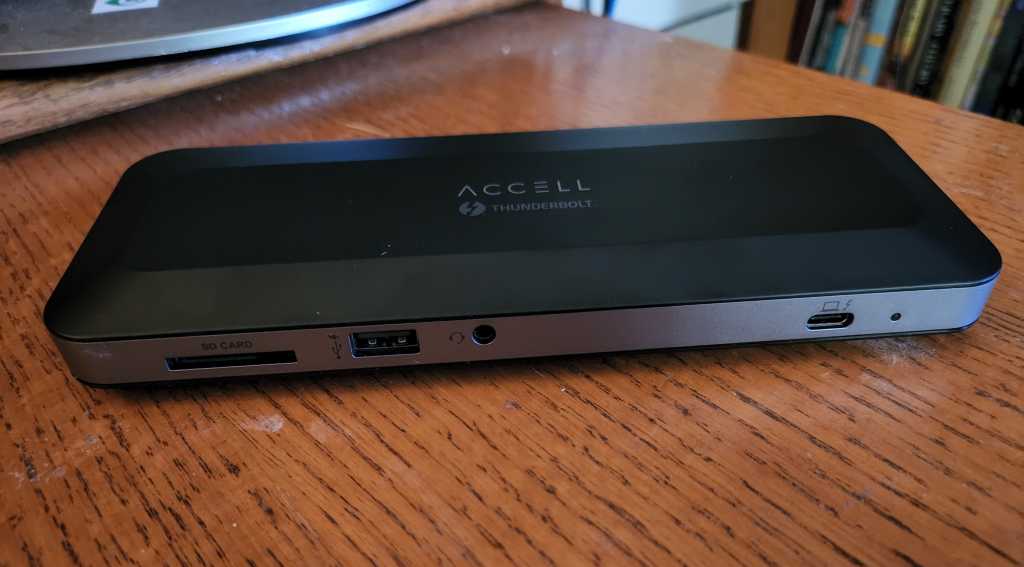 This Thunderbolt dock probably would be preferred by Mac users, with its dedicated downstream Thunderbolt ports and limited display ports. The dock offers advanced DisplayPort and power capabilities, but doesn’t quite live up to the specs in places.

If you’re considering buying Accell’s Thunderbolt 4 Docking Station (K160B-002G) consider whether its mix of ports matches your needs. This dock leans a little more heavily on Thunderbolt ports being used as display ports, which may not be what you’re looking for.

The Accell K160B-002G measures 7.75 x 3 x 1 inches, and weighs a rated 0.9 pounds. Like all powered docks, there’s a fairly hefty power brick that accompanies it. Accell’s dock is a bit different in that it includes both a U.S. and a UK power cord inside the box.

To use a pair of (typical) 4K60 PC displays, that means buying a USB-C/Thunderbolt adapter to HDMI or DisplayPort, or an actual Thunderbolt-HDMI cable. You may find that it’s not worth the hassle, though—to give you an example, I ordered this QGeem USB-C to HDMI adapter from Amazon to test the functionality. The description includes the words “USB-C,” “Thunderbolt 3,” and “4K,” but the cable only generated a 4K30 signal on one test laptop, and a 1080p signal on another. Buying a dock with a dedicated port might save you some angst and an additional $10 to $15 or so to buy the adapter or cable.

Note: This review is part of our roundup of best Thunderbolt docks. Go there for more information about competing products and our buying recommendations.

Otherwise, the dock includes a nice mix of ports. On the front, the upstream (to your laptop) Thunderbolt port sits alongside a headphone jack, a 5Gbps USB 2.0 port (with 7.5W charging) and a full-sized SD 4.0 UHS-II card slot. On the rear you’ll find a gigabit ethernet port, three 10Gbps USB-A ports (4.5W charging), the DisplayPort 1.4 port, the two USB-C (Thunderbolt 4) downstream ports (which supply 15W) and the power slot. The included Thunderbolt 3 cord is about 2.5 feet.

Two advantages are hidden within Accel’s specs: First, the dock uses DisplayPort 1.4 (versus 1.2), which simply adds more bandwidth, especially if if you’re interested in an external 4K display but running at speeds over 60Hz—the spec supports 32.4Gbps, basically a 4K display running at 144Hz for gaming. The dock also pushes 96 watts downstream to your laptop, which will easily handle almost all productivity laptops as well as some “content creation” laptops with a GPU, provided it can accept that much power through its Thunderbolt port. Nevertheless, this is a forward-looking dock.

The dock itself seems well-made, essentially metal but with a sheath of plastic covering the top and bottom. It will warm under load, but not unreasonably so. Unfortunately, the dock didn’t deliver the rated power from either of the USB-A ports, only about 2.5W. That was enough to charge a smartphone, but not where it should be.

Performance otherwise generally met expectations. Playing protected content worked as expected, and the dock dropped 15 frames out of 10,000 when streaming 4K content from YouTube via ethernet. (Our current test setup doesn’t include high-refresh-rate 4K displays to test the DisplayPort port at its full capacity, nor does our laptop accept 96W through the Thunderbolt input.) The ports all ran at their expected speeds.

We were both pleased and slightly disappointed with this dock, which offers a variety of pros and cons. The price is a bit higher than its competition, too.

As PCWorld’s senior editor, Mark focuses on Microsoft news and chip technology, among other beats. He has formerly written for PCMag, BYTE, Slashdot, eWEEK, and ReadWrite.