Weeks after taking a pay cut following multiple lawsuits and accusations regarding sexual harassment, crunch and other issues within Activision Blizzard, CEO Bobby Kotick became the subject of a scathing Wall Street Journal report. The Wall Street Journal specifically cites cases of former employees at various companies, including Treyarch, Sledgehammer Games and more. Much of it focuses on reports from within studios working on the Call of Duty franchise, painting the leadership at these places in a very negative light.

Now, things are getting worse, again. The ongoing outrage over Activision Blizzard just can’t seem to die down. The issue came to a head recently when a previous walkout forced the company’s hand. The employees at the gaming giant walked out and eventually won concessions, including better pay and working hours. The threats of unionization and mass resignation were pinned on the leaders at these studios, who did nothing to address ongoing claims of abuse.

And with this new controversy, it reveals just how toxic some of those leaders actually were. Some of the allegations against Kotich himself include Kotick threatening an assistant “to have her killed” in 2006 and telling a flight attendant of a private plane, allegedly after the pilot sexually harassed her, “I’m going to destroy you.”

The report also details various instances of discrimination. The co-head of Blizzard Jennifer Oneal, who stepped into the role after J. Allen Brack stepped down, detailed her own experiences. The e-mail included claims of feeling unsafe while working at the company, as well as repeated instances of pay discrimination.

CEO Bobby Kotick has been a very polarizing figure over the last few months. And his response, or lack thereof, to these issues, has been telling. A statement after this new report was leaked online, revealing an incredibly tone-deaf feeling among the leadership. 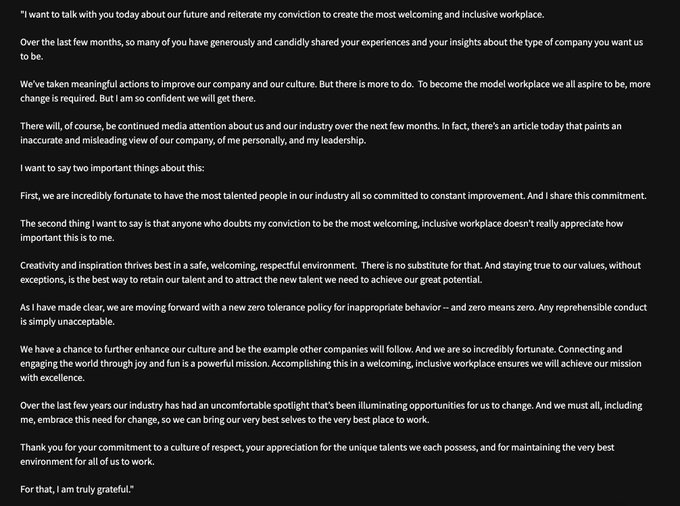 In that statement, Kotick directly challenges the report, saying that he and Blizzard have a “conviction to be the most inclusive workplace,” and that he feels that people who don’t see that “don’t appreciate how important this is to me.” This kind of emotional appeal will definitely fall on deaf ears among Activision Blizzard employees. It all comes across as very gaslight-y.

Kotick goes further by saying that the necessary push for changes is welcome. He says “we must all, including me, embrace this need for change.” So why wait, Bobby? And I just have to ask, does anyone believe this? The Wall Street Journal doesn’t, saying: “Nothing in Activision Blizzard’s statement challenges the facts in our reporting.”

The response has already been called out by employees who assisted in previous walkouts. A BetterABK, an employee-run advocacy group, has already posted online about plans for another walkout. The response online has been equally nonplussed. Many fans are calling for change, saying that Activision has failed both them and their employees.