Apex Legends Season 12: Defiance is finally around the corner. A gameplay trailer revealed a new limited-time mode, an updated Olympus map, as well as Mad Maggie, the dynamo from Salvo.

Season 12’s thematic revolves around sabotage and defiance. Maggie, a convicted war criminal from Salvo, was sentenced to death by combat in the arena. Sabotaged and experiencing teleportation glitches, Maggie is to blame for the shocking destruction throughout Olympus.

Initially introduced in Season 8 as one of Fuse’s friends, Mad “Margaret Kōhere” Maggie comes from Salvo. She’s a rough person that won’t hesitate to fight for what she believes in. After Fuse’s betrayal, which left her behind on Salvo, she did not hesitate in sabotaging her best friend’s arrival in the arena.

Because of it, Maggie gets caught by the Mercenary Syndicate and was sentenced to death. However, Eduardo Silva, Octane’s dad, intervened and stopped it. He was more inclined towards a slightly softer punishment, a “Death by Combat”. Now, Maggie’s destiny is to die in the Apex Legends arena.

Mad Maggie might not be the hero the Legends want on their squad, but she might just be the villain they need. See if you can control the madness when Apex Legends: Defiance launches on Feb 8 💥 pic.twitter.com/DtZzme9t8M

Maggie has a few explosive abilities, which complement her fast gameplay and high-speed defense intrusions. Rushing towards enemies and weakening barricades with her Riot Drill is an integral part of her playstyle. Ultimately, she is an all-around legend, focused on close-combat that doesn’t seem too hard to understand. That makes an interesting character for players to use.

Olympus has gone into disarray in Season 12 after the sabotaged orchestrated by Eduardo. Nonetheless, Maggie takes all the blame onto herself, due to her past actions and Eduardo’s shenanigans. 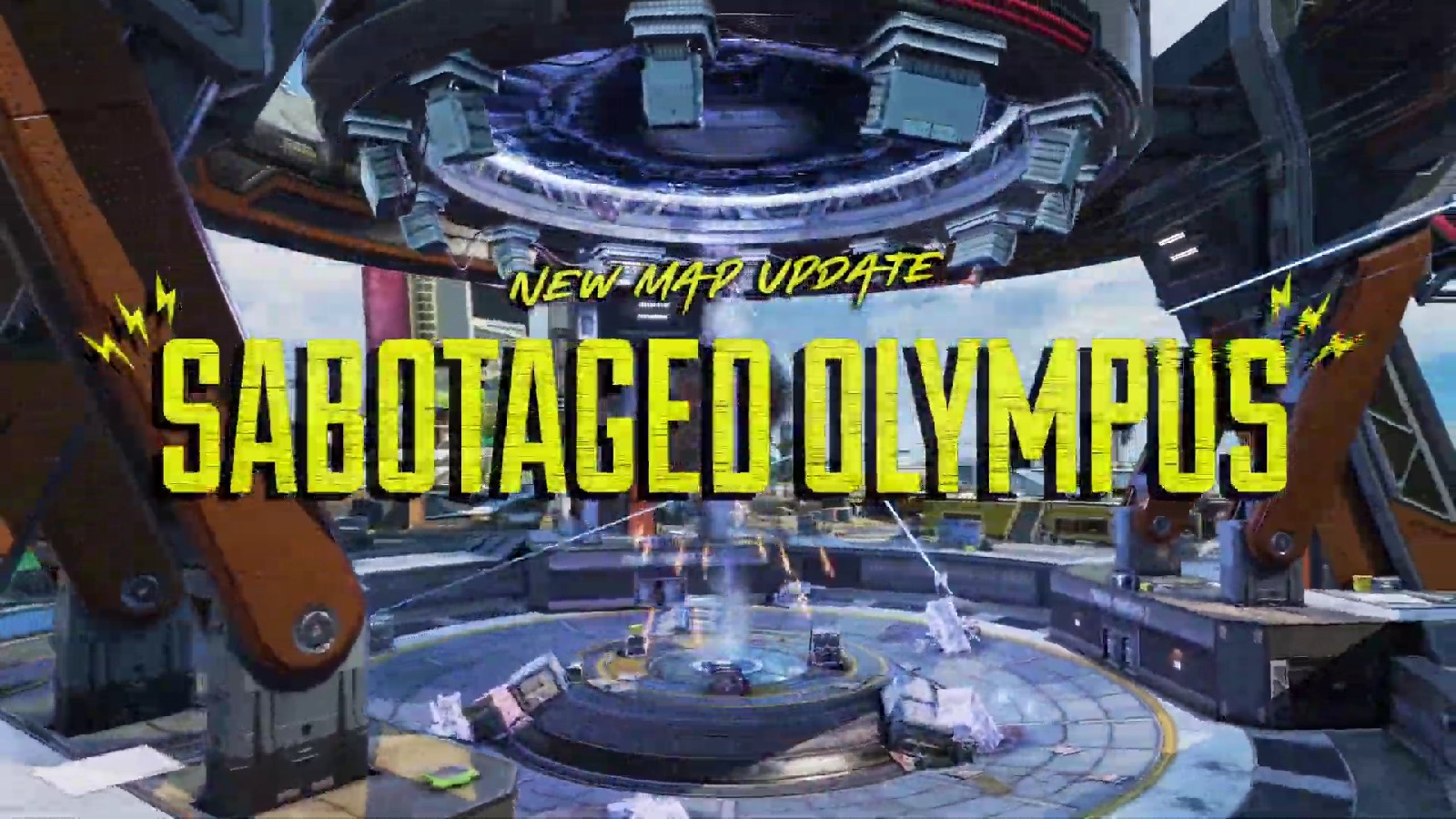 All over the Olympus map, objects and buildings are landing in unusual places. It makes traversing, closing-in, team fights, and even traveling a lot more complicated. As the map changes each time, players will have to experience more unique combat situations.

The new limited-time mode is a bloodsport that features control-based objectives for two sides. It’s a 9v9 mode that allows players to control areas throughout the outlands. The longer a player holds on and survives, the more points they earn. Players who die eventually quickly respawn to get back into the action once again. Performing well grants players additional boosts towards their rating on the leaderboard thanks to a “fan-rating system.”

Players can log in and play throughout February, earning anniversary prizes such as attainable characters, thematic and legendary packs. Octane, Wattson, and Valkyrie will all be up for grabs during the event period. All that players will have to do to claim the goodies is log in to the game during the specified weeks. 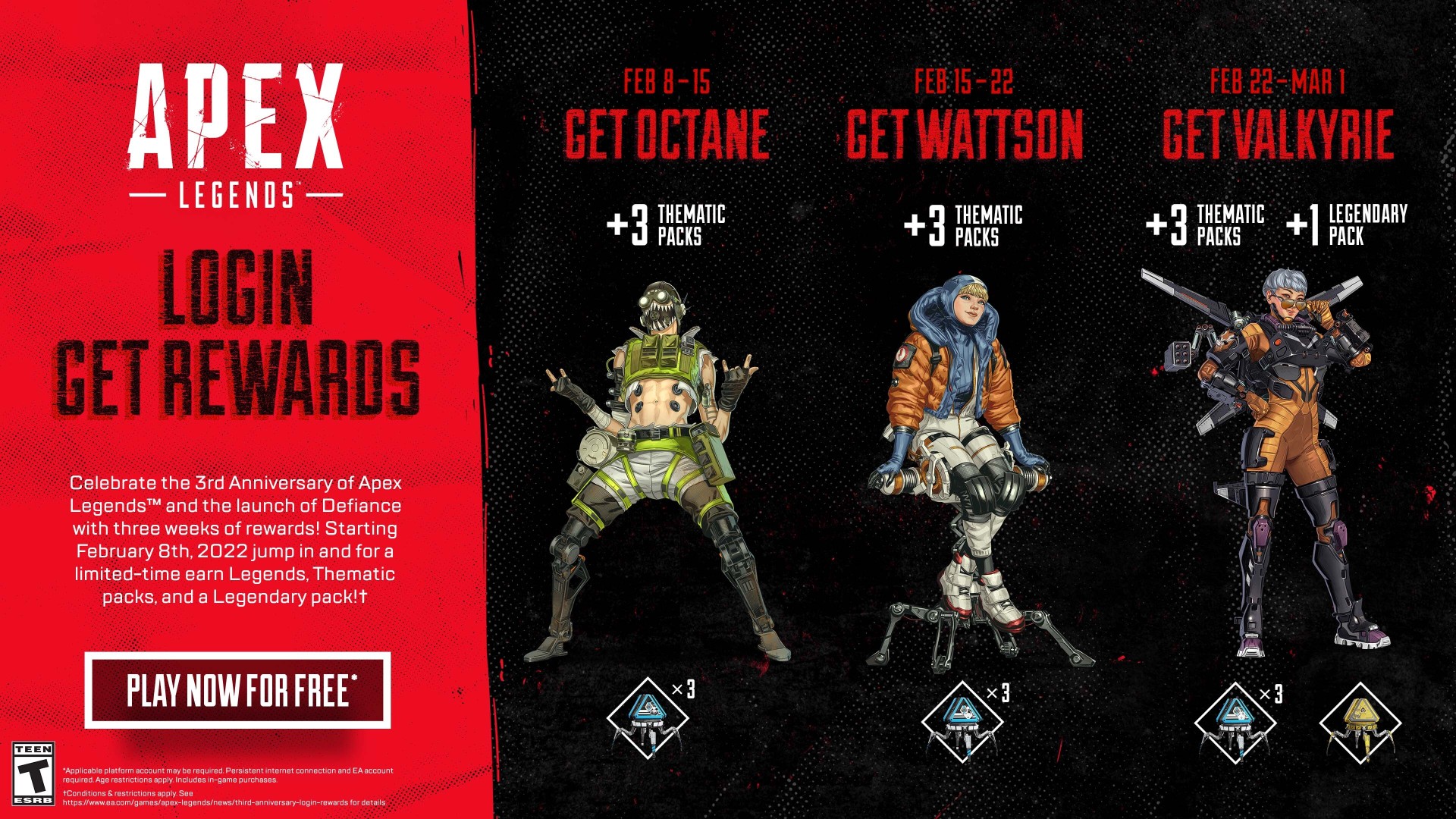 With such an explosive and disrupting season coming soon, players can look forward shortly as Apex Legends Season 12: Defiance debuts on February 8, 2022.