I’m not even going to pretend neutrality: I have a weakness for this particular vibe so all it had to do was be okay and I was all-in. Fortunately, it’s actually…one hell of a game, or several games, all wrapped in HURR-AY HURR-AY HURR-AY! SEE WONDERS THE WORLD HAS NEVER SEEN! COME ONE COME ALL! IT’S THE MAGNIFICENT CIRCUS ELECTRIQUE!

You play an enterprising lady reporter with a pet lion–I’m not joking–investigating your mother’s mysterious death during your uncle’s circus. For the record, I didn’t ingest any hallucinogens while writing this or playing the game. The story drives it forward, but the actual gameplay is…partly Darkest Dungeon but with mimes and strongmen and bobbies on steampunk wheel engines and then partly, exactly what I said, trying to manage a circus and all the personalities therein.

The game overall runs in Days, so you begin each day looking at your circus, which has a variety of things you will slowly uncover like recruiting new performers, crafting useful things, collecting collectibles, healing, and so on. However, the MAINNNNNNNNNNNNNNNN EVENT…sorry, I can’t stop doing that and frankly I don’t want to…is deciding which show to put on that night. 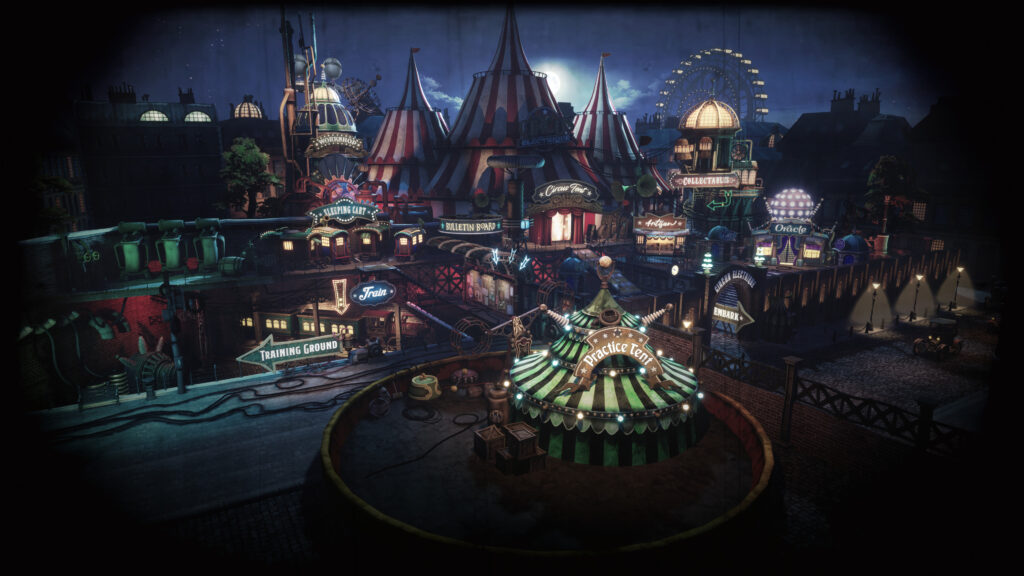 Each show has a variety of factors to consider: The novelty value is important for drawing a crowd, but you also want your performers to gain experience, but you also want to impress the crowd that shows up, so that is just picking the show format. Once you have decided on that, you have to pick the performers. Each performer has the activity or activity they do–strongmen! Clowns! Firespitters! Magicians!–and a variety of stats for how exciting they are and how well they work the audience. BUT they also have preferences for exactly what part of the show they like to do AND who they like to work with. So, yes, it is managing a troupe of whiny theater kids.

Once that is set…then you have to actually decide who you are going to take out into the streets of London because OH HO WE HAVEN’T EVEN GOTTEN TO THE MAIN BIT OF THE GAME. As you go along and unlock more buildings, this becomes even more complicated, as you’ll have people performing, resting and healing, training, and you have to balance all this with punching evil in the street.

The brave souls you pick swagger out into London. Via an overhead map you explore, which means anything from story events to random loot boxes to minigames to, ultimately, combat. You’ll fight evil mimes, bobbies, brick layers, rat slayers, bakers, you know, the usual horrors of “British people.” Frankly, that felt achingly authentic. It’s like I was actually in Britain, only it was a steampunk dystopia this time. 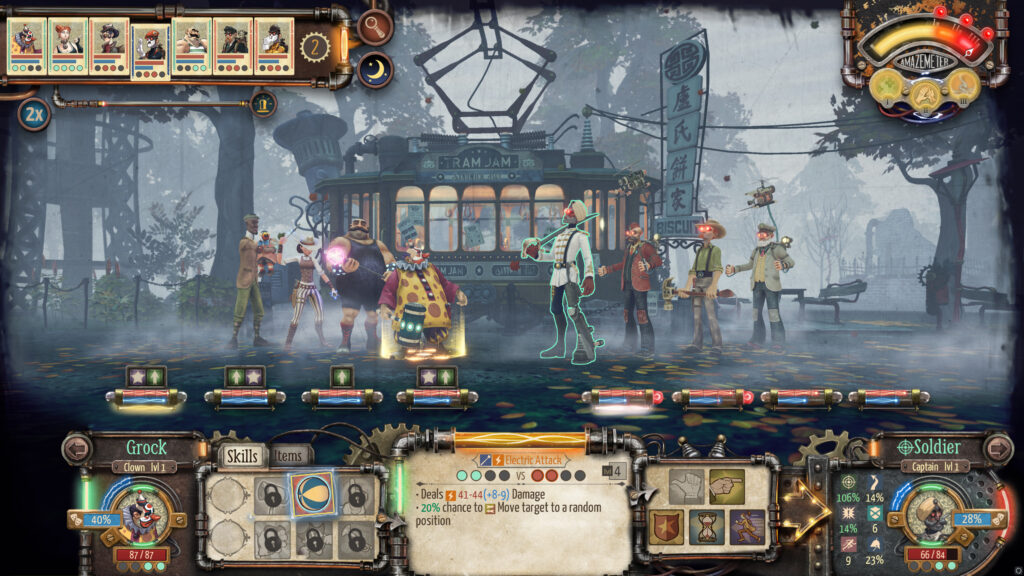 The combat utilizes everyone’s skills, but also leans heavily on status effects and conditions. This can make it feel like a series of gimmicks rather than something requiring serious planning. On the other hand, dudes running away because my strongman flexed so hard kicked ass. It’s also kind of funny when both teams are trading gimmick status effects then you realize just beating them to death would be more effective. It is less funny when they do it to you.

On the other hand, having to balance your “adventuring lineup” with the weather and combat conditions with what they might actually encounter with the reliance on gimmick attacks can be kind of exhausting, especially when neither side really has the damage to break each other, so you’re just slap-fighting for rounds and rounds and rounds.

But there’s also an Amazemeter where if you really style on them, you can unlock some fun super moves. It’s…look, it’s circus themed limit breaks, like your reporter lady drives up to the party with a popcorn cannon an shoots them with healing popcorn. Really! 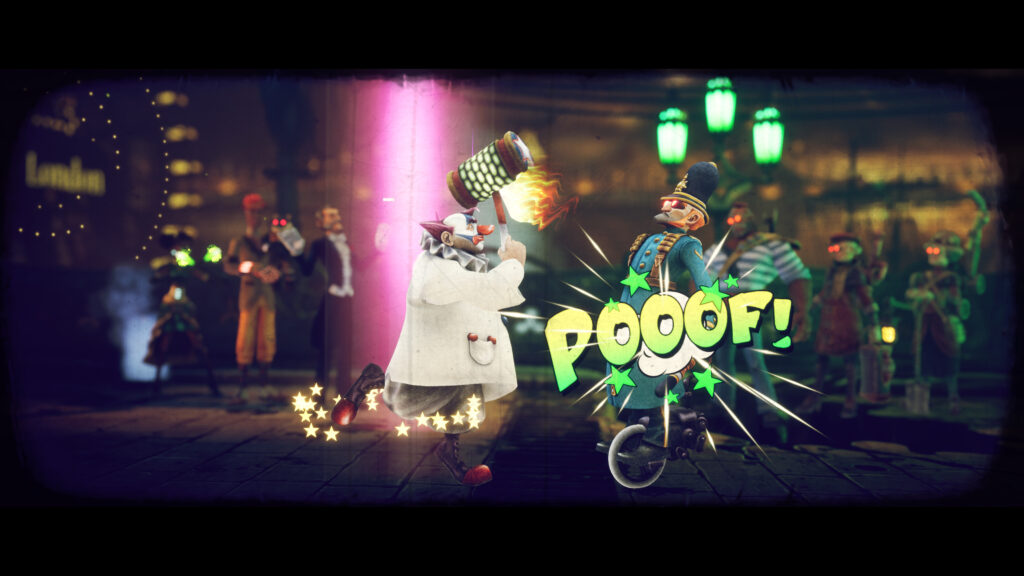 After you do a thing or two in London (and the show runs) the day is over and you get an EXTREE EXTREE newspaper of how you did, the wealth you collected, story events, and other interesting bits and bobs.

That is the basic flow of the game but doesn’t capture all the layers it keeps opening up. Suddenly, you can recruit new performers or new types of performers, or do new shows, or you unlocked some new crafting stuff. Every combat encounter provoked a bemused oh now what reaction as some damned enemy I hadn’t seen before popped up with a suitably ridiculous attack. Or suddenly you’re trying to beat orphans (not literally) in games of chance or running into a crowd of admirers or…or…or…

Unrelated, but I also specifically want to mention: There is a Help button to take you back to the Codex (help text). Thank you, Circus Jesus.  You don’t have to play the entire tutorial again! But you can also look things up!

But seriously, it’s a lot of fun.