Despite his enduring popularity, Conan the Barbarian remains surprisingly underserved across the many realms of modern media. Sure, there’s the various ongoing Marvel comic book series, but there’s been little else in recent years for Conan fans to get excited about. In some ways Conanheads – I’m pretty sure that’s the term of endearment from one Conan fan to another – should be happy about this situation. After all, far too many popular franchises have been hacked up by corporations until all that remains is an empty and withered husk of what was once a glorious pop culture creature. Despite this, I’d love to play a Devil May Cry inspired 3rd person action-adventure Conan the Barbarian. Until that fateful day, we’ll have to make do with Conan Chop Chop. It’s a terrible title, but don’t let that put you off what is a decent little local multiplayer party game with a roguelike twist.

Conan Chop Chop depicts the formidable barbarian in a unique manner. The terror Cimmeria has been reduced to a cute little head and body with sticks for arms and legs, and he’s joined by several of his ‘pals’ from the Hyborian Age. You and three mates can choose between Valeria, Belit, Pallantides, and, of course, Conan himself, taking on a refreshingly simple quest to overcome the challenges set by nefarious sorcerer Thoth-amon in his Wrath-a-Thon. This amounts to hacking and slashing through various dungeons over four distinct environments.

Combat is fast, simple, and engaging. A nudge of the thumbstick causes your hero to wang their weapon in the corresponding direction, and that’s pretty much all you need to know to get hacking and slashing. It means that Conan Chop Chop is an ideal party game for when you’ve done far too much partying, though there’s a little bit more depth to it than that. Arrows can be shot, bombs detonated and numerous magical power-ups activated. Meanwhile there are frankly thousands of items available and, delightfully, each visually changes your character. Ensuring your little stick-armed barbarians looks gorgeously unique. And very cute. 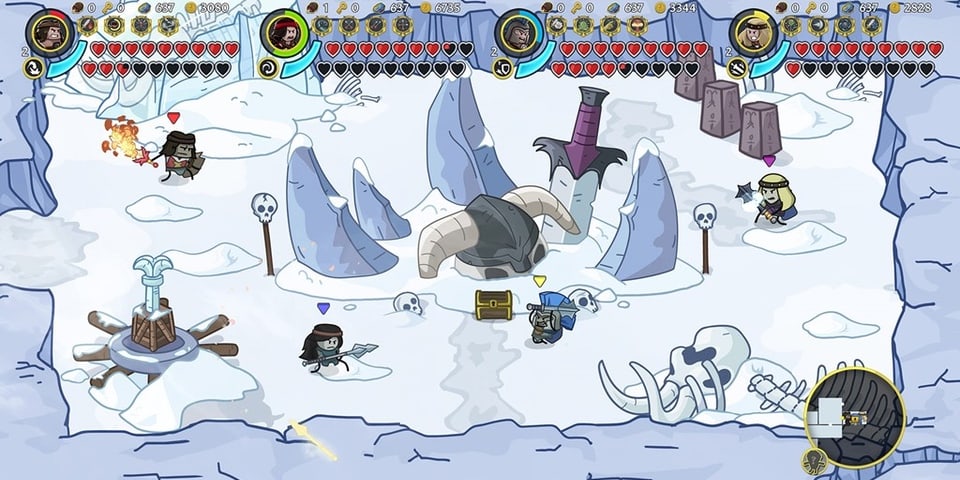 Overall, the gameplay is fast, fun, and slick but there are some issues to be found. First up, the game does a poor job of communicating an enemy’s area of attack. The frustration caused by this is palpable, as a player may think they’ve dodged out of the way, only to crumple over dead soon after. Then there’s the annoyance caused by the fact that upon entering a new dungeon the game will insist on surrounding the party with enemies. You and your pals will be discombobulated, you won’t know where your avatars are your health bars will be destroyed in a matter of seconds. This attempt to increase the game’s difficulty feels cheap and frustrating.