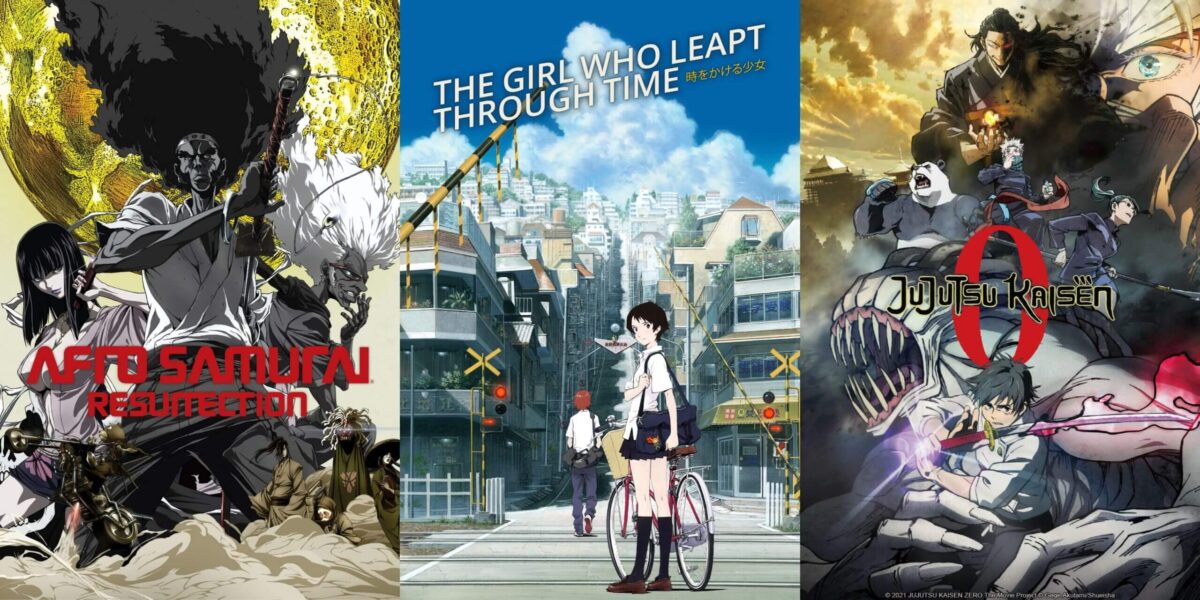 Crunchyroll recently announced the slate of movies coming to the platform, including JUJUTSU KAISEN 0, the prequel movie to the JUJUTSU KAISEN anime series, as well as one new movie each Thursday. The slate also includes classic titles such as Mamoru Hosoda’s critically acclaimed The Girl Who Leapt Through Time, Fuminori Kizaki’s Afro Samurai: Resurrection starring Samuel L. Jackson, Masahiro Andō’s Sword of the Stranger, and Naoyoshi Shiotani’s PSYCHO-PASS Sinners of the System film trilogy launching on Crunchyroll this month.

Additionally, ODDTAXI in the Woods, a retelling of the anime series ODDTAXI with extra scenes, along with compilation movies from the popular franchises Free!, Code Geass, and Black Butler, are making their way onto the service as well. Since August 11, Crunchyroll has been adding new anime movies to its platform every week, including Katsuhiro Otomo’s AKIRA, Makoto Shinkai’s your name., Mamoru Hosoda’s Wolf Children and The Boy and the Beast, as well as Josee, the Tiger and the Fish, The Stranger by the Shore, and Sing a Bit of Harmony. New movie drops will continue on through October.

Afro Samurai (Samuel L. Jackson) avenged his father and found a life of peace. But the legendary master is forced back into the game by a beautiful and deadly woman from his past. Nowhere are the flames of hatred more intense than in the eyes of Sio (Lucy Liu: Kill Bill). She won’t quit until Afro is schooled in the brutal lessons he dealt those who stood in his way. (Official Trailer) – Story and Directed by Fuminori Kizaki

ODDTAXI in the Woods (OLM)

Walrus taxi driver Odokawa lives a lonely life without family, social activities, or stimulating conversation. His only friends? His doctor and a former high school classmate. But his mundane existence is thrown into chaos as interactions with seemingly unconnected fares – a college student, a nurse, a comedy duo, a hoodlum, and an idol group – converge with an endangered missing girl. (Official Trailer) – Directed by Baku Kinoshita

PSYCHO-PASS Sinners of the System: Case.3 Beyond the Pale of Vengeance (Production I.G)

The Girl Who Leapt Through Time (Madhouse)

After waking up late, flunking her pop quiz, embarrassing herself on numerous occasions, and starting a fire in her home economics class, high school student Makoto Konno figures she’s just having one of those days. And just when she thinks she’s made it through, the brakes on her bike malfunction, putting her on a collision course with a speeding train. The life-ending accident would have been the perfect end to the worst day ever, but the strangest thing happens—she leaps backwards in time. (Official Trailer) – Directed by Mamoru Hosoda

Sword of the Stranger (BONES)

This classic tale from studio BONES is a hidden gem of its time! Pursued by formidable Chinese assassins, young Kotaro and his dog run into No Name, a mysterious stranger who gets pulled into the chase. The unlikely companions form a bond over saving the dog from a poison attack, but chaos erupts when the assassins find Kotaro, and No Name must face his past before a horrible fate is met again. (Official Trailer) – Directed by Masahiro Andō

Black Butler: Book of the Atlantic (A-1 Pictures)

All aboard to the next great adventure for Ciel and his demonic butler, Sebastian! After hearing rumors of a peculiar society bringing people back from the dead, the two board the luxury liner Campania on her maiden voyage to investigate. Incognito amongst the mysterious Aurora Society, they find familiar faces and a sight they can’t believe—a woman raised from the dead! But surprise quickly turns to dread when the shambling corpse attacks. (Official Trailer) – Directed by Noriyuki Abe

JUJUTSU KAISEN 0 follows Yuta Okkotsu, a nervous high school student, who enrolls in the mysterious Tokyo Jujutsu High School under the guidance of Satoru Gojo after being haunted by the curse of his childhood friend. (Official Trailer) – Directed by Sunghoo Park

Before they were making waves in high school, Haru and Makoto took their marks in junior high! Take a dive into the past with your favorite swimming boys and new faces as they learn what it means to work together and make new friends. (Official Trailer) – Directed by Yasuhiro Takemoto

Haru and Rin are swimming towards bright futures. But can they face the challenges that await them? After everything they’ve been through, with their friends by their sides, they’ll make a splash! (Official Trailer) – Directed by Eisaku Kawanami

Haru and Rin are swimming towards bright futures. But can they face the challenges that await them? After everything they’ve been through, with their friends by their sides, they’ll make a splash! (Official Trailer) – Directed by Eisaku Kawanami

Free! -Road to the World- the Dream (Kyoto Animation)

When Haru and Makoto start college, they run into the unexpected—their old teammates from middle school. Still hurt from their team suddenly dissolving, Ikuya is out to prove he’s better than Haru. But more threats lie in the waters of competition! (Official Trailer) – Directed by Eisaku Kawanami

Code Geass: Lelouch of the Rebellion I – Initiation (Sunrise)

He gave up his life to save the world and protect the ones he loved. The day Lelouch vi Brittannia fell was the day this war-torn world found peace. Now, as his friends work to keep the peace, a terrorist attack could risk everything. Can the brilliant tactician outwit death and save them all? Or will Lelouch’s legacy fall here? (Official Trailer) – Directed by Gorō Taniguchi

*** Schedule subject to change. Subbed and Dubbed languages may vary per title ***