It’s been a long-held maxim of gaming that strategy games and management sims don’t work on consoles. On PC with a mouse and keyboard you can furiously click away to manage resources in an RTS, dive into menus four or five layers deep, and wrangle vast armies in battle. For the last five years, Paradox Interactive has been trying to prove that wrong, but have now taken on their greatest challenge to adapt Crusader Kings 3.

Over the decades, strategy games have generally worked best when designed from the ground up for a console’s gamepad – unless using a PS1 mouse, Wiimote, Move or gimmicky voice controls – but Paradox has defied that ever since porting Cities: Skylines to console, and the simultaneous releases of Surviving Mars and Age of Wonders: Planetfall. The real mountain to climb has been in adapting their premier grand strategy games, and Stellaris did a great job, thanks in part to the sci-fi setting and tone of the game. Crusader Kings 3 is a very different challenge, due to its historical setting and character role-playing.

The one thing that’s really been missing from Paradox Interactive’s efforts is a cohesive, unified approach to this task. Surviving Mars and Age of Wonders were both handled by the original developer, Cities Skylines and Stellaris both by Tantalus Media, and now Crusader Kings 3 is coming via Lab42. Each game has a different approach to managing all the information it provides to players, a different controller layout that tries to make stuff as accessible as possible. It’s… mostly successful in Crusader Kings 3.

This game puts control of a dynasty in your hands, as opposed to a particular country or empire. Yes, you’re from nobility, and you might rule over an empire, but you’re really role-playing as a lord or lady and (eventually) their descendants. There will be banquets to host or attend, you’ll try to keep your vassals happy to stave off a rebellion, while perhaps getting into your own leige’s good graces, you can be particularly virtuous, or a conniving back-stabber, scheming and adultering your way through the times. How well you do that, however, will depend on your character’s abilities and specialities, which may or may not be passed down to their children and your later characters. 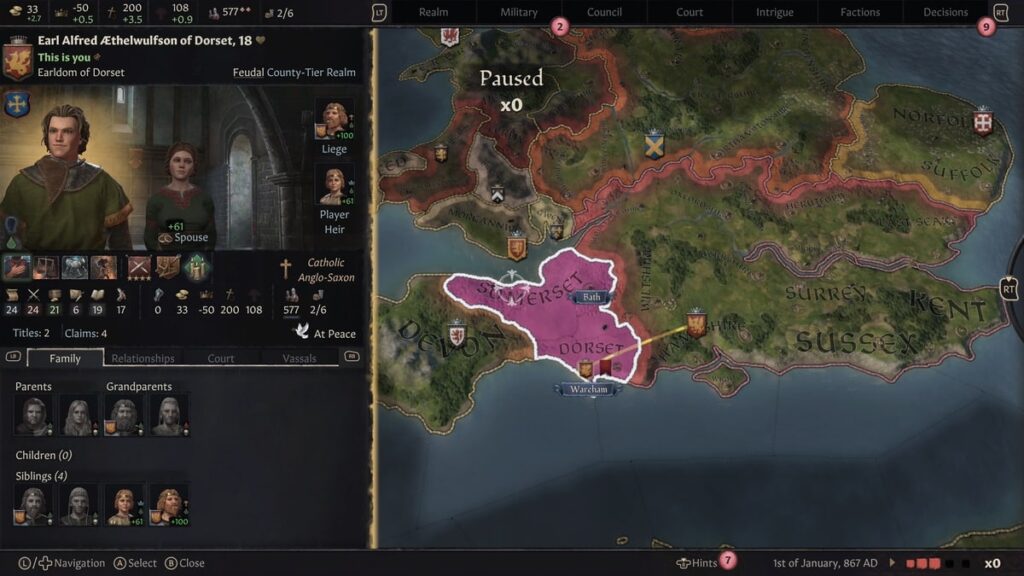 Picking it up on console, you’re thrown into a tutorial the first time you start playing, and it’s practically a necessity, even if you know the game from PC. The new control paradigm is all about the triggers. To access the primary management pages for your domain you have the Command Bar at the top of the screen that you scroll through with quick pulls of the triggers, bringing up menus for your Council, Military, and so on that overlay the right-hand third of the screen. You can then move around this with the left stick or D-pad, and tab between sub-sections with the shoulder buttons.

However, if you hold either trigger, then you get a radial menu, the right bringing up different map views and the left for menus related to your character’s dynasty, personal advancement. To view your character’s page, you actually have a face button dedicated to this – Y on the Xbox – to quickly bring up your menu and start diving into those of your relatives, wards, and so on. Speaking of which, you also have consistency in selecting stuff with the A button, and bringing up an action menu with X.

Characters, cities and regions all live on the left-hand side of the screen, compared to the Command Bar’s menus being on the right, and this can often lead to occasions where you’re left with just a sliver map in the middle of the screen. You can quickly shift focus with sideways flicks of the right stick, so that you can get back to the map or quickly bounce between character and empire management. 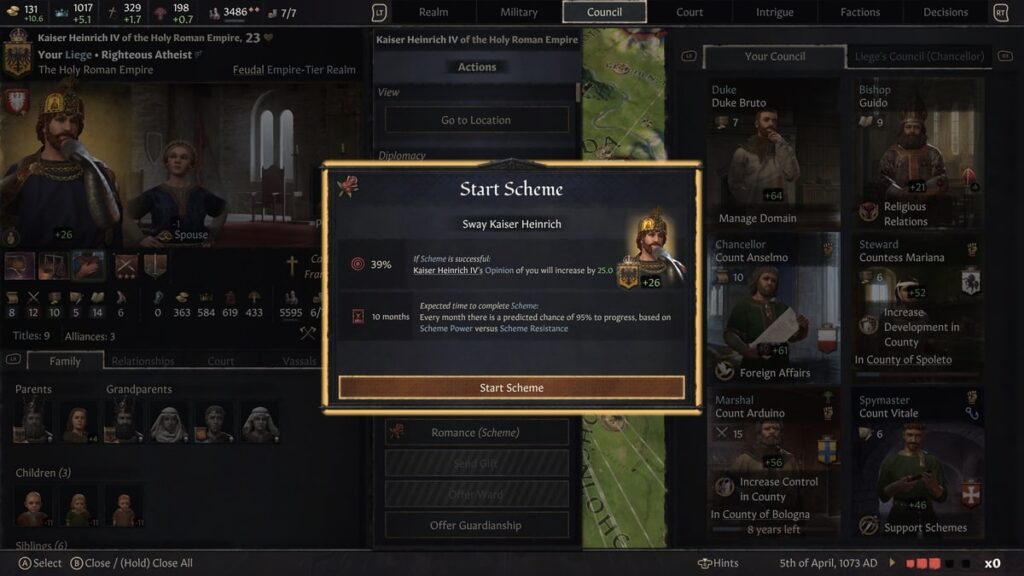 You can end up with the entire screen covered by menus in CK3, but thankfully this is quite a manageable situation.

Then again, that sliver of map can be covered up even further by the action menu, or in general by an immovable event pop-up that presents you with a narrative decision to consider and act upon. This is where things can really start to feel quite hemmed in and constrained. Reengineering the UI for a TV that you’re going to be sitting metres away from, everything has been enlarged significantly. In addition to toggling focus or holding B to close all windows at once, you can also just hide them temporarily by holding both triggers.

Honestly, if what I’ve just described sounds like a lot to learn, then it feels like it as well. The bottom left corner of the screen is dedicated to showing relevant buttons and controls, but it still took me quite a while to spot the double trigger map view control. There’s also the way that modifying the game speed required a button, and how the game’s excellent nested tooltips system on PC to dive into layered messages about the game’s workings are now hidden behind a specific tooltip mode, summoned by holding down the left stick.

I can certainly appreciate the challenge of adapting everything this game needs to work with a gamepad, and I can see the overriding logic that runs through what Lab42 has created, but simply controlling the game feels like a hurdle that players old and new will have to overcome. 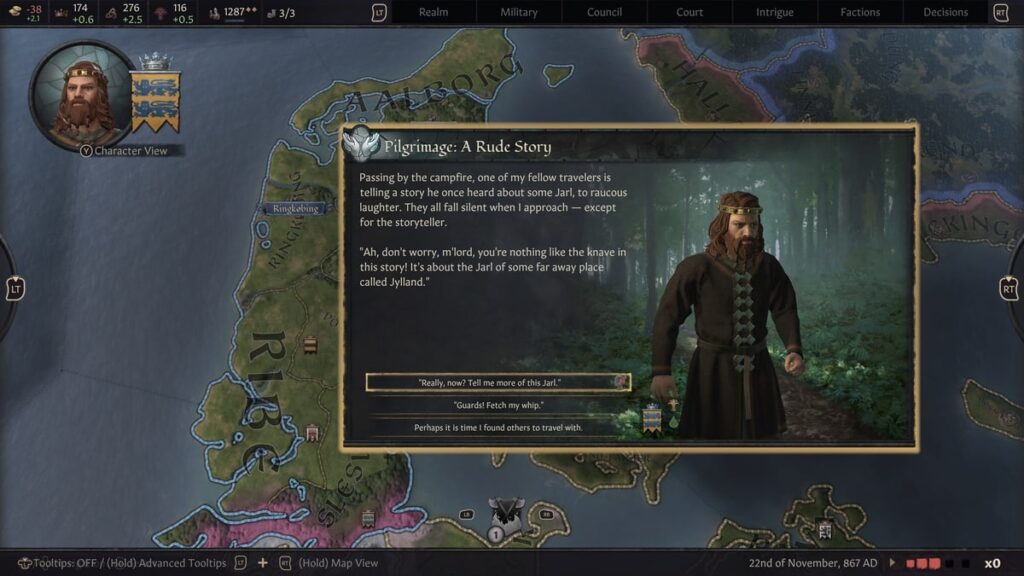 The biggest element, I feel, is in allowing you to offload running your military to an AI. You don’t have an army aimlessly standing around on the map in these games, but instead rally your paid soldiers and all your levies together as and when you need them to march off to war. Now you can hand that army over to an AI to go and campaign for you, and give them instructions for how aggressively to attack. It’s something that I rather wish was possible in the PC game, where it’s easy to lose track of an army you send crusading as you manage affairs (and maybe just have affairs) back at home, but if you want to really win in wars, you need to take command yourself and pay attention. The AI is useful when warring against a smaller state that you can easily crush, and seems generally sensible in larger conflicts as well, though it’s most likely using the same AI and decision making as the other non-player kingdoms.