In What Lies in the Multiverse, you play as a kid of unknown name who meets Everett, an eccentric and sarcastic scientist from another world with the ability to jump between dimensions. You’ll embark on a journey with him, discovering twisted realities in your way, escaping from a colorful cast of characters in their mission to capture you, all while getting to know Everett’s mysterious past and motivations. It’s a journey of discovery, filled with absurd and dark humor, existential questions, and relatable characters from all around.

At its core, it’s a pixel art puzzle/platformer game where you switch between different universes (which act as different versions of the level in which you are) to solve puzzles and progress through the story. You can see all kinds of universes! Frozen ones, where the ice makes your steps slippery and allows you to jump incredibly long distances. Poisoned ones, where you can only be a short time in them without running out of air. Or inverted ones, where everything is upside down, even the gravity! These all vary in aesthetic, theme, mechanics, narrative, and even music! There’s a whole multiverse to explore in this little adventure. Worldbuilding is a big factor of the narrative too, although optional for the more curious player. Why are these universes like this? What happened to all these people? And why is a warrior grandma fighting a horde of yellow-eyed zombies? If you pay attention during your adventure, you may come across some abandoned objects from people from all kinds of worlds, which you can collect to delve deeper into the narrative, or just satisfy your inner collector spirit.

It’s a fun little adventure full of surprises, and we’re incredibly excited (and nervous!) to show it to you all today on Xbox! It’s been a hard couple of years of work, with lots of incredible people giving their best to make this story as special as it is today, and so we hope you enjoy it as much as we did while making it <3

Thank you for reading! 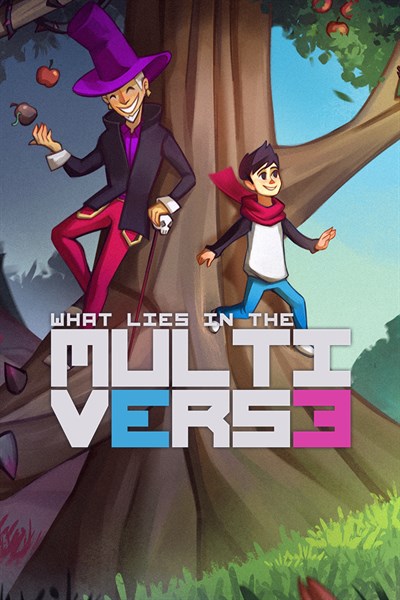 What Lies in the Multiverse

☆☆☆☆☆ 1
★★★★★
$14.99
Get it now
What Lies in the Multiverse is a story-driven 2D adventure that one could call a dramatic comedy. Filled to the brim with hilarious, cartoonish hijinks, the narrative also presents the player with mature and deep themes like death, envy, and obsession. Things inevitably go batshit crazy very fast in the Multiverse when you discover the ability to travel between parallel worlds. These worlds are alternate versions of each level and differ in aesthetic, theme, and physicality. Switching between them allows you to solve logical and spatial challenges and to progress the story. Seamless Transformations Would you like to change the game world on the fly? Now you can! Can't reach a ledge? Bam! Switch worlds mid-air. Afraid of sliding around in an icy environment? Alternate to another universe for firmer ground! Just be careful when messing with gravity… Diverse World Embark on a journey across a variety of gorgeous pixel-art worlds, each offering something unique. Explore temples, towns, harbours, the wilderness and more as you race to unlock the secrets of the Multiverse. Colourful Cast of Characters Meet a bunch of quirky but compelling characters such as Everett, your eventual genius companion. Picture a sarcastic, eccentric Albert Einstein. Then there’s EZ, a mysterious figure everyone fondly remembers but can't describe. Or ZENITH, a group of enigmatic and shadowy figures always breathing down your neck. A Deeper Story While staying true to its light-hearted nature, the story's poignancy builds as you progress. A rollercoaster of laughter, joy, and sorrow awaits.