The Disney Classic Games Collection is a strong gathering of some of Disney’s most beloved games from the 16-bit era. Some of the games have aged better than others, but having them all present, alongside a bevy of fascinating behind-the-scenes content, makes this Collection a worthwhile grab. 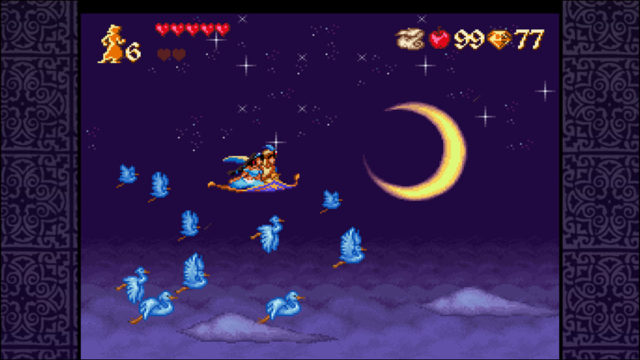 One of the very first games I ever played was Aladdin on the Sega Genesis, and it slapped. Still, many people prefer the SNES version, or hold nostalgia for the Lion King game on either console. The Disney Classic Games Collection lets players jump into both versions of either game, as well as both versions of the Jungle Book game. Throw in the handheld releases and behind-the-scenes goodies, and you have a grand collection of some timeless classics.

While an earlier incarnation of this collection containing the Genesis Aladdin and both versions of The Lion King has been out there for a bit, this new updated package brings the Capcom-developed SNES Aladdin game, as well as the Jungle Book game on both consoles. There are actually quite a few differences between each iteration of the various games, often because of different developers, but that makes this package feel more varied. 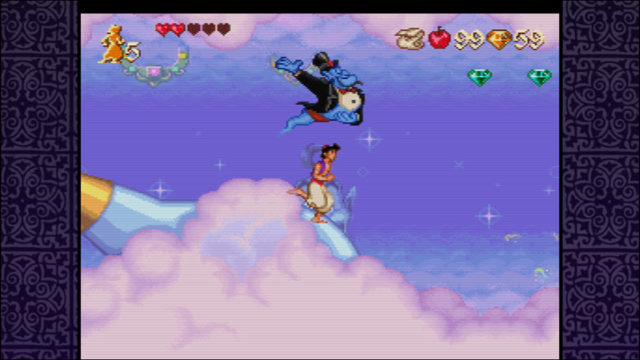 We’ll primarily focus on the new additions here, but know that the Genesis version of Aladdin holds up very well, and that both Lion King and Aladdin are worth trying on their own– especially with the special features available here. (More on that shortly.) They can be challenging, but the smooth platforming combined with the visuals and music make for a strong retro gaming experience. You can even try the Gameboy versions out, which are a lot rougher due to the weaker hardware, but a unique piece of history nonetheless.

For new additions, Aladdin on the SNES is an excellent game (even without the sword that the Sega version flaunted.) Platforming is a blast, as you can climb over platform ledges and bounce off of enemies with satisfying precision. Platforming is more of the focus here, rather than combat, and it’s a bit smoother as a result. I can see why some fans prefer this one, as it really has its own strengths going for it. I imagine it was a pain to license this one, as it was developed by Capcom instead of Virgin, so I’m quite happy that Digital Eclipse was able to include it this time around. 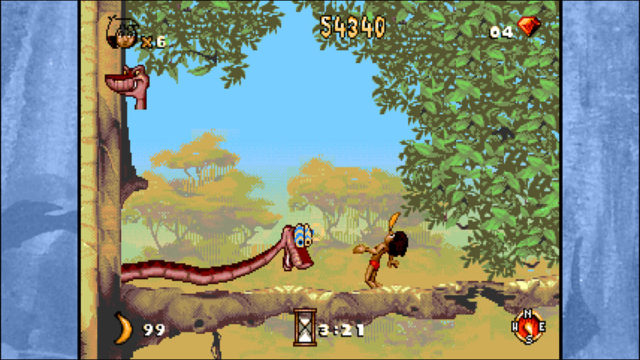 Jungle Book is the weakest game of the collection, as it doesn’t feel as well-rounded as the other games. Both iterations are visually impressive when you remember that this was in development by Virgin before Aladdin was, and the music is fun, but that’s about it. The controls feel slippery and imprecise, and the pace of movement is a bit jumpy. Exploration doesn’t feel especially rewarding, which is a bummer given the larger levels. Overall, though I can respect the work that went into Jungle Book, and I’m glad it’s been rereleased for people who grew up with it,

“Even though I wasn’t huge on the Jungle Book game itself, I really appreciate how much work went into replicating the visual style of the film and making a unique game.“

The bonus features in this collection are really delightful. There are handy in-game features like different visual filters and the ability to rewind the game or start playing on any level after watching the AI play for you. These are excellent for people who struggle with the higher difficulty level of these classics, or who want it to look as they remember from their CRTs back in the day. It’s the development information, however, that really piqued my interest. 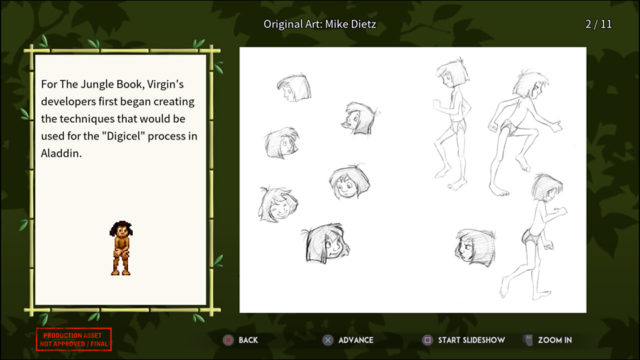 For all of the titles in this collection, you can look at a whole range of goodies that delve into things like cut content, the development process, and art design. The different assets have descriptors and bits of trivia that you can view as a slideshow, which made me appreciate all three titles a lot more. There are even some engrossing video interviews with people like Tommy Tallarico about creating different aspects of each game and the experience that came with said creation. Even though I wasn’t huge on the Jungle Book game itself, I really appreciate how much work went into replicating the visual style of the film and making a unique game.

The physical PS4 version of the game came with a handy manual for the SNES version of Aladdin, which was great given how rare manuals are now. Weirdly enough, the cover art and back had a blurry logo for The Jungle Book, which could just be a misprint. The physical edition is pretty neat for game collectors, and I’m glad I can put it alongside my original Aladdin cartridge.

The Final Word
The Disney Classic Games Collection brings some true classics back into the spotlight with useful new features and excellent bonus content. This is the best way to play these nostalgic titles, and while some have aged better than others, I’m glad to be able to play them again.