Battle Pass Collection 2022 can be unlocked with the Battle Pass 2022 to obtain amazing sets for Huskar, Doom, Batrider, Broodmother, and Clockwerk. 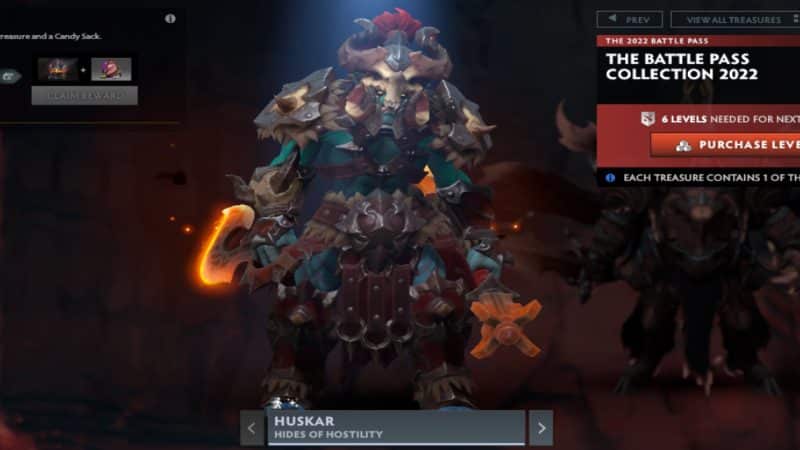 Huskar is a fierce Strength hero in Dota 2. He can use his missing health points after taking hits to add bonus damage while fighting his enemies. The Hides of Hostility set bestows Huskar with rustic metallic armor that has shades of maroon, brown, yellow, and grey.

The ranged hero holds a giant dagger in his off-hand and a spear in his other hand. The spear he carries with him resembles a shovel. Both of Huskar’s weapons have an orange glow emanating from their sharp edges. His shoulders are heavily padded with grey metal that has spikes popping out of them.

The bracers of his arms are studded with the horns of a wild beast. His lower body has a brown buckle that covers his body with a maroon cloth. Huskar wears a large ring on his chest and his back. These rings are strapped to his shoulder. The headpiece of Hides of Hostility has 2 sets of horns that are attached to a skull made of bones. The Hides of Hostility set for Huskar includes Animation and Ambient Effects that are unique to the skin.

Doom – Heat of The Sixth Hell 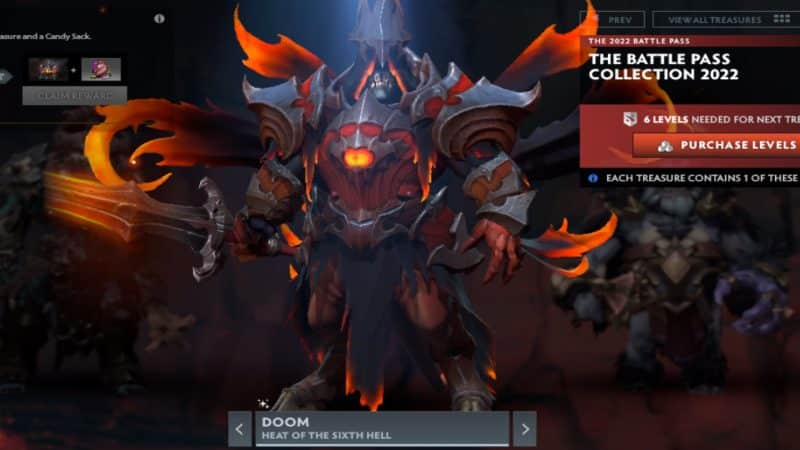 Doom is a melee hero with abilities that can disable his enemies and nuke them during the game. The Strength hero can Devour creeps to gain additional abilities that can be used to terrorize his opponents on the lane and in the jungle. He can learn new skills such as Fireball, Slam, Raise Dead, and Chain Lightning by eating neutral creeps alive. Devour also provides bonus gold and armor to Doom after being cast.

The Heat of the Sixth Hell set covers Doom from head to toe with metallic armor. His armor is primarily red and grey, with flashes of bright orange spilling out from various parts. The hooded headpiece of Doom has a large crown that makes him appear mysterious and frightening to his foes. His shoulders have several layers of metal that surround his arms. The item for his chest is adorned with an orange eye that glows as he steps forth to slay his enemies.

The weapon slot of Heat of the Sixth Hell is forged from molten steel. The long sword has a vibrant orange aura that gives Doom’s weapon an intimidating appearance. The back of his armor has 6 feathers extending outwards to protect the Strength hero from incoming damage. The Heat of the Sixth Hell set also has an item for his tail that makes it thicker compared to his other sets. 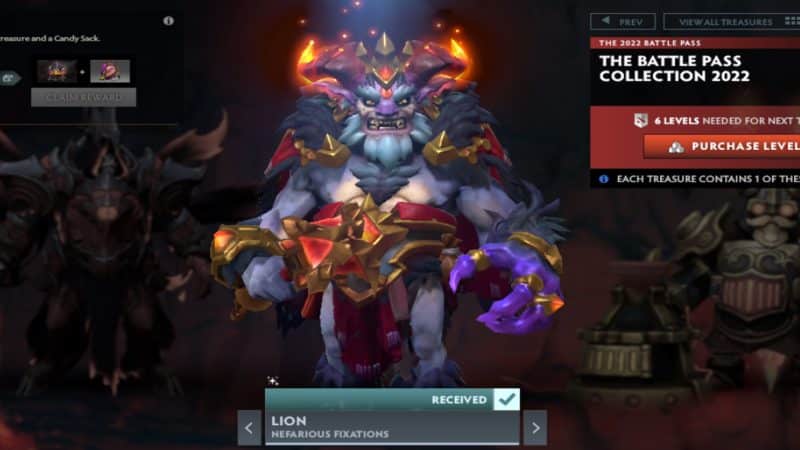 Lion is a support hero who is capable of taking down enemies with a burst of damage from his spells. The Intelligence hero can stun multiple enemy units with Earth Spike and Hex them by turning them into creatures that are disabled from using their abilities. He can deal up to 850 damage to enemy heroes with Finger of Death and can result in the instant annihilation of his opponents.

The Nefarious Fixations set for Lion makes him look vicious in combat. He wears a robust cape on his back that is embroidered with gold coins and dark feathers. The item for his arm encases it with a large purple palm that can make it look monstrous while playing Lion in the game. The buckle of his belt has an attractive gem that keeps his outfit in place.

The face of Lion is covered with a grey beard, making him appear wiser on the battlefield. His headpiece has a set of horns that burn bright. It also has a crystal directly on his forehead. He holds a staff in his arm that is similar to a mace. 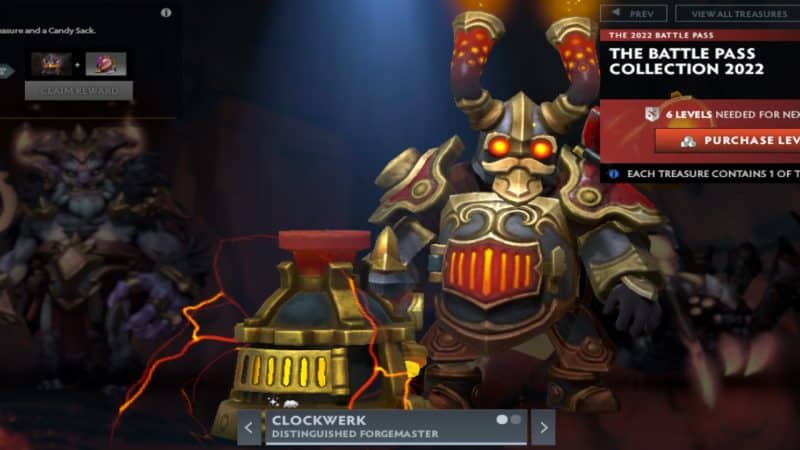 Clockwerk is a Strength hero who is extremely good at initiating team fights in Dota 2. He can use Hookshot to grapple onto enemies that are 3000 distance away from him. The melee hero can latch onto opponents and isolate them using Power Cogs. He can get closer to enemy units and stun them with Battery Assault to cancel their channeling and deal up to 95 damage per second.

The item slot for his Rocket Flare looks stunning and can be used constantly to reveal new locations on the map. The Distinguished Forgemaster set has a measuring gauge attached to his shoulder and a rotating valve attached to his back.

Clockwerk has a sturdy hammer in his hand to clobber opponents in battle. The Distinguished Forgemaster set also includes a custom model for Power Cogs that is charged with electricity. 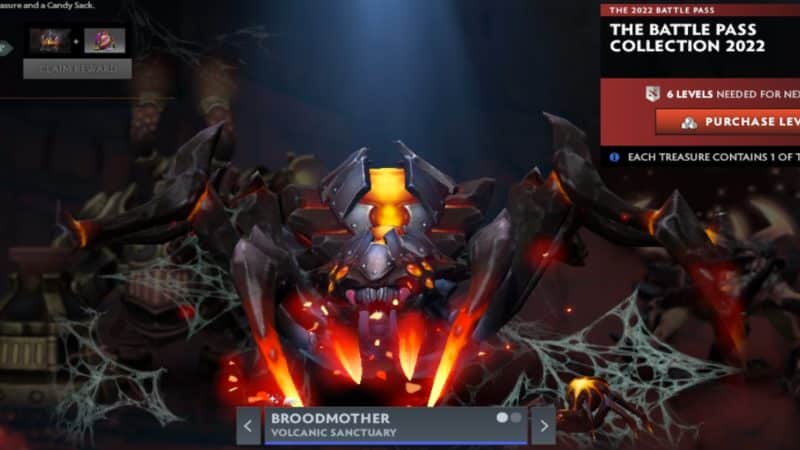 Broodmother is an Agility hero who can chase down her enemies and drain their health with her attacks. She can use her abilities to gain Lifesteal for her physical strikes and cause her opponents to miss their attacks. The melee hero can spin webs around the map that grant Broodmother bonus movement speed and increase her turn rate. She also gains additional health regeneration while moving within the webs that she has spun.

The Volcanic Sanctuary set for the Broodmother envelops the Agility hero with a hardened exoskeleton. The limbs and fangs of the Broodmother are bright yellow with an orange glow. These skeletal structures depict a living volcano that sprouts from the Broodmother. 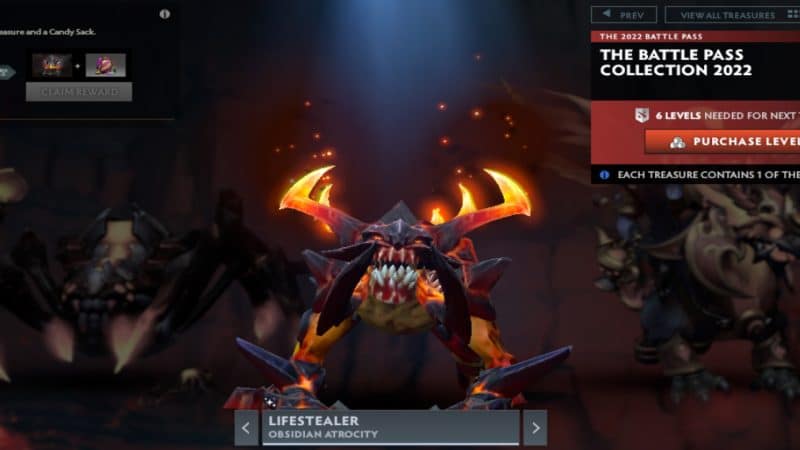 Lifestealer is a tank hero with staggering abilities that enable him to slow his opponents and sap their health with each attack. He can turn a portion of the maximum health of his enemies into attack damage with his passive ability, Feast. Many people pick Lifestealer and kill neutral creeps in the forest to farm gold fast in the game.

The Obsidian Atrocity set for the Lifestealer makes him look like a piece of moving rock that has come alive to hunt for enemies. His limbs are covered in dark rocks that can leave behind footsteps that are enkindled with his wrath. There are 6 sharp rocks that reach out from his back to balance his movement.

The headpiece of the Obsidian Atrocity set for the Lifestealer gives his face a horrifying appearance that can cause his enemies to flee from battle. His skull is protected with durable rocks that can withstand incoming damage from his foes.

Batrider – Charms of The Firefiend 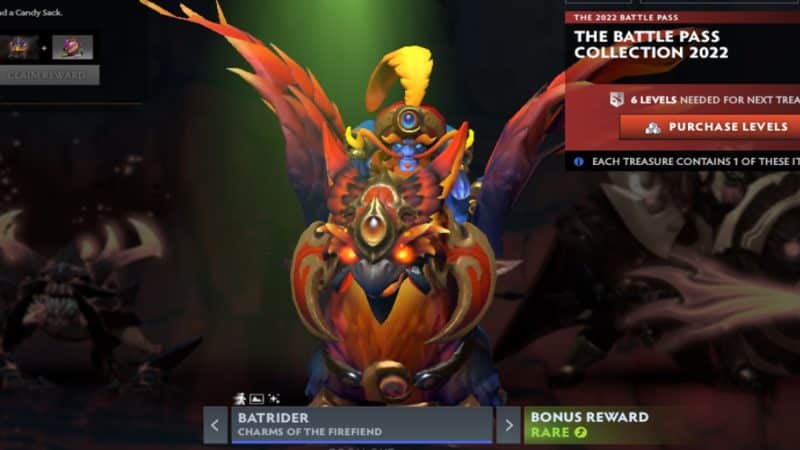 Batrider is an Intelligence hero who can wipe out waves of enemy creeps and set his opponents ablaze with his abilities. He can use Sticky Napalm to stack additional damage on enemy units and hurl an explosive at them to deal damage over time. He is one of the best heroes in the game for initiating combat.

He wears a large turban with an elongated feather sticking out from his forehead. Batrider’s mount has shimmering gemstones that light the way forward for the Intelligence hero. The Charms of the Firefiend set for the Batrider includes a loading screen as well. 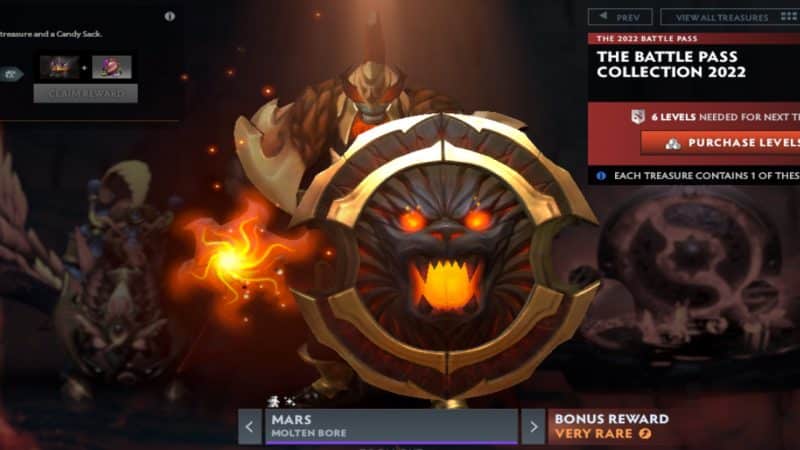 Mars is a Strength hero and a mighty tank. The Molten Bore set for Mars is a very rare bonus reward that can be unlocked with the Battle Pass Collection 2022 treasure. Mars wears polished yellow and black armor that makes him look larger on screen.

He carries a humungous shield with the emblem of a lion embossed on it. The mouth of the lion and its eyes are wide open and emanate a glow that can derail opponents with its gaze. The spear of Mars has a cone-like structure at its tip that can be launched at enemies to root them. You should consider yourself fortunate if you can get the Molten Bore set for Mars during the Battle Pass 2022.