Cure won the Korean cup with a reverse sweep against Dark in the finals,

MaxPax achieved a back-to-back victory in Europe, and

trigger won his first ever weekly cup on the Americas server.

Presumably because of TSL9 being played offline in the Netherlands, week #139’s Korean cup had a low turnout that was highlighted by Dark, Cure, and SpeCial. These three players performed well as expected and all reached the semifinals. The semis went according to most expectations, with Dark defeating NightMare 2-0 while Cure defeated SpeCial 2-0 as well.

The finals between Dark and Cure was very close, with Cure earning a narrow 3-2 reverse sweep victory (VOD). Cure opened up with proxy -Barracks in game one on Data-C, which was scouted relatively late by his opponent. Dark went for an aggressive defense with Drones, stopping the attack but losing 7 Drones in the process. Despite this costly hold, Dark was able to play himself into a more or less even macro game. Ultimately, Dark managed to stay in control of the game with plenty of expansions, and overwhelmed Cure after almost 26 minutes of battles. The second game on Waterfall was shorter, as Dark was the one to use an aggressive strategy with multiple Nyduses early on. Although Cure was on the verge of stabilizing a few times, his main was in shambles and he eventually had to tap out.

Dark was up 2-0 after those two games, but Cure showed great resolve to pull off a reverse sweep. It started on Tropical Sacrifice, where his Marine-Marauder composition ran over the Zerg defenders at a weak timing. Then, Cure defended Dark’s early Ling-Roach aggression perfectly on Moondance, riding that momentum to tie the series 2-2. Finally, Cure won the deciding map of Inside and Out by using multiple harass tools successfully—Hellions, Liberators, and Marines squads all got some damage in. Dark was forced into a desperate counter-attack after falling very behind economically, and he GG’d out after failing to narrow the gap.

Upset(s) of the day: No real upset happened on the week, except maybe Cure beating Dark. However, this is at best a slight upset, as Dark does not play at his usual scary level in the ESL Open Cups. 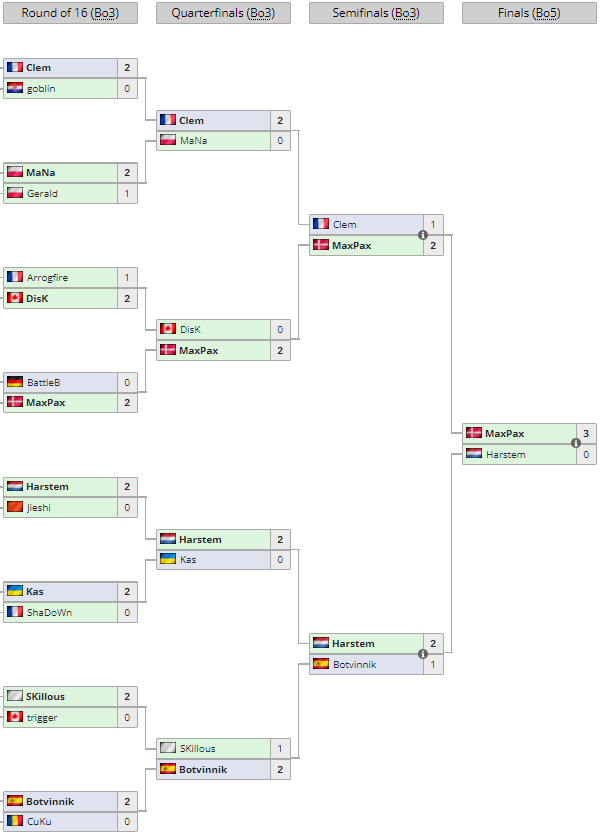 There were a lot of participants in this European cup, but barely any notable Zergs. Indeed, not a single Zerg managed to reach the RO16, which was filled with Protoss and Terran. In fact, the five Zergs that reached the RO32 did not even take a game off their opponents.

Besides the Zerg wipeout, other interesting results happened early on. Most impressively, Romanian Protoss CuKu took out HeroMarine 2-1 in the so-called ‘Big Gabe Weekly.’ Also, last week’s finalist SKillous was taken out in the RO8 by Botvinnik, who himself lost to Harstem in the semis. Overall, Harstem had a relatively favorable bracket up to the finals, beating Jieshi, Kas, and Botvinnik along the way. Meanwhile, the other finalist spot was contested between frequent Europe cup opponents Clem and MaxPax. Although Clem has a whopping 129W–64L head-to-head record against MaxPax over his career, MaxPax has been the one bullying Clem as of late. That trend continued in this tournament as well, with MaxPax defeating Clem 2-1 to reach the finals.

The finals between Harstem and MaxPax (VOD) went pretty much as expected for fans who have watched the Danish Protoss dominate in PvP over dozens of weekly cups, ending in a convincing 3-0 sweep. The first game was a 13 minutes long macro game, and one big fight with a superior concave allowed MaxPax to get sufficiently ahead to win the game the next push. The second game was on Cosmic Sapphire, and MaxPax won in less than 4 minutes by killing a lot of Probes with an Oracle—Harstem was a bit late to defend with his Stalkers and had no Shield Battery in his mineral line.

Finally, Harstem tried to convince MaxPax that he was all-inning him off 1 base, while actually taking a hidden expand on the top left of the map. MaxPax bought the bluff for some time, but once he tried to attack Harstem he saw a Probe going at a weird place and scouted the hidden expo in the process. This forced a desperate fight from Harstem, who GG’d out after the battle went south.

With the victory, MaxPax equalizes both Reynor and ShoWTimE in the EU Cup medal count with 14 tournaments won.

Upset(s) of the day: CuKu beating HeroMarine was a tremendous upset, while Botvinnik beating SKillous was also a noteworthy feat. It was also nice for arrogfire to pick up a win against uThermal, although the Terran is retired and often plays funny strats in EPT Cups for YouTube purposes. 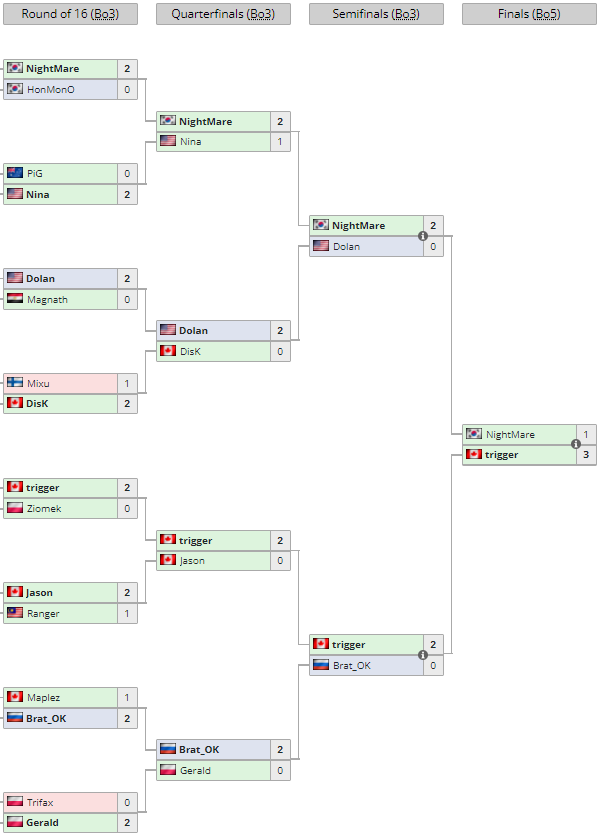 The NA cup had reduced participation in week #139, with even regular fixture MaxPax declining to go for the double.

NightMare was actually the top seed on the day, and he reached the finals with wins against players such as Nina and Dolan. Other players got a chance to shine as well—most notably, old school Terran Brat_OK went all the way to the semis with wins against Maplez (2-1) and Gerald (2-0). However, it was ultimately trigger’s time to shine, and he took down Brat_OK in the semis to reach the finals.

NightMare would not let himself get swept and won on Data-C with a proxy-Gate and proxy-Shield Batteries off 1 base, which was enough to get a 4 minute victory against trigger’s fast expansion. Finally, the last map of the series was a ‘real’ macro game with both players expanding early on. trigger used a particularly tight timing with early +1 attack upgrade and 45 Probes off 3 bases. Although the deciding fight lasted quite long, trigger eventually won it convincingly to take the series 3-1 and win his first EPT cup.

Upset(s) of the day: Brat_OK’s run was especially impressive for such an old school name. In fact, Aligulac gave him less than a 17% chance of beating Gerald in the quarterfinals. Trigger winning his first cup was a nice achievement as well, but he was the relative favorite in every match thanks to the weakened field.