HeroMarine managed to grab yet another European cup win, and

ByuN claimed the top spot in the Americas for the first time since July.

The Korean cup had a strong field this week, with Scarlett and Solar leading the way for Zerg, ByuN, GuMiho, and SpeCial playing for Terran, while Astrea, herO, and NightMare were the top Protoss representatives.

The first eye-catching upset came in the RO16, as Rex took down Scarlett 2-0. Besides that, GuMiho and herO dropped maps to Percival and Chinese Terran ANNEX, respectively, but still survived to reach the next round.

The round-of-8 went according to expectations, as the favorites all won with clean 2-0 victories: herO beat NightMare, Solar took down SpeCial, ByuN defeated Rex, and GuMiho eliminated Astrea. If anything, the surprise was that ALL the favorites took 2-0’s. Things got a bit spicier in the semis, as Solar defeated herO 2-0 and GuMiho beat ByuN 2-0 to set up the grand finals match.

The finals between Solar and GuMiho (VOD) was very close, with Solar coming out with a tight 3-2 victory. The ONSYDE Gaming Zerg won the first game, punishing GuMiho’s attempt to play a greedy mech opener. A Ling runby took out some key Cyclones, and then follow-up Mutas were enough to take advantage of the reduced anti-air and end the game.

GuMiho tied the series by playing bio on Moondance, killing Solar with a big bio-tank timing on his opponent’s fourth. Then, GuMiho went ahead by one point by winning on Data-C. He opened with a double-Thor drop—one of his signature strategies since his pre-military days—before transitioning into mech. The game lasted for quite some time, but GuMiho was a step ahead at each turn and ultimately won the game.

However, Solar was able to deny GuMiho his cup championship, coming back to win the next two maps. He took Waterfall by defending an aggressive 2 base bunker + Tank push from GuMiho, which tried to abuse the cliff at the Zerg third. After pulling far ahead with his successful defense, Solar forced GuMiho to tap out without a fight against a Mutalisk counterattack. Finally, Solar closed the series out with a more regular macro game on Inside and Out. With his victory, Solar won his 16th gold medal on the Asian server, putting him in third place behind Cure (17 wins) and Zest (21 wins).

Upset(s) of the day: Rex beating Scarlett was the biggest upset for me, as the ONSYDE Gaming Zerg had less than a 24% chance of beating Scarlett according to Aligulac. Solar beating herO was also a big upset, as he also had around 25% odds of beating herO according to the stats website. However, it may not have surprised regular ESL Open Cup viewers who have seen herO somewhat struggle in online play lately. 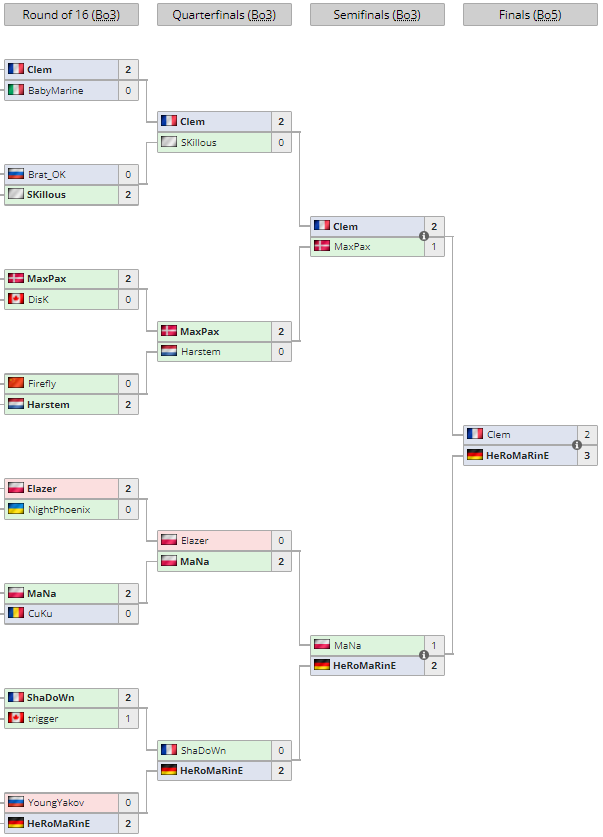 The week’s European Cup had strong Terran and Protoss contingents, but only had Elazer to defend the honor of the top-tier Zergs. Otherwise, the usual title contender trio of Clem, HeroMarine, and MaxPax came to play, while other strong players such as Harstem, trigger, and SKillous threw their hats in the ring as well.

Both Clem and MaxPax had relatively smooth journeys up until their semifinals clash—the Terran getting wins over players like BabyMarine and SKillous without losing a map, while MaxPax defeated DisK and Harstem in his best match-up of PvP. After losing 5 matches in a row versus MaxPax, Clem was finally able to defeat his newfound nemesis and reached the finals with a 2-1 victory (thwarting MaxPax’s attempt at a three-peat in the process).

The bottom side of the bracket was dominated by HeroMarine, who made it seem like he was out for blood after eating a big upset at the hands of CuKu in the previous week’s cup. Taking down players like ShaDoWn and MaNa, Big Gabe reached the finals to face Clem.

The finals between Clem and HeroMarine was as even as one could expect from the best two European Terrans, going the full five games (VOD). HeroMarine won the first game on Inside and Out with a clever 3 base all-in while Clem went for a standard 4 base setup. The lower investment in the economy allowed Big Gabe to have slightly more Vikings and gain enough air control to slowly but surely take more and more advantageous positions. Clem’s attempts at counter attacks were not enough and HM ultimately prevailed.

Clem won the second map of Tropical Sacrifice very quickly, proxying a single rax to help produce more Reapers. HeroMarine was caught a bit off guard and the micro of Clem was enough to overwhelm Big Gabe. HeroMarine managed to win the third game in a regular macro game, using good army movements to grab advantages here and there that added up over time.

The fourth game on Waterfall was very action packed and lasted 16 minutes despite the map being very small, but the population counts never went too high due to all the fights. Clem won that game to tie the series 2-2.

HeroMarine won the last game on Moondance, where both players got aggressive early on. Big Gabe was slightly more effective in his harass and defense, and came out with the advantage. Clem built Banshees to try and come back, but was forced to tap out after failing to narrow the gap.

With this victory, HeroMarine reached an impressive 49 gold medals in EPT cups, above of #2 Zest with 44 and Clem with 43.

Upset(s) of the day: One of the big early round upsets was MaNa beating Elazer. The Polish Protoss is far removed from his prime days, and he had sub 17% odds of beating Elazer according to Aligulac. Overall, he had a strong run this week, reaching the semis and even taking a map off HeroMarine. 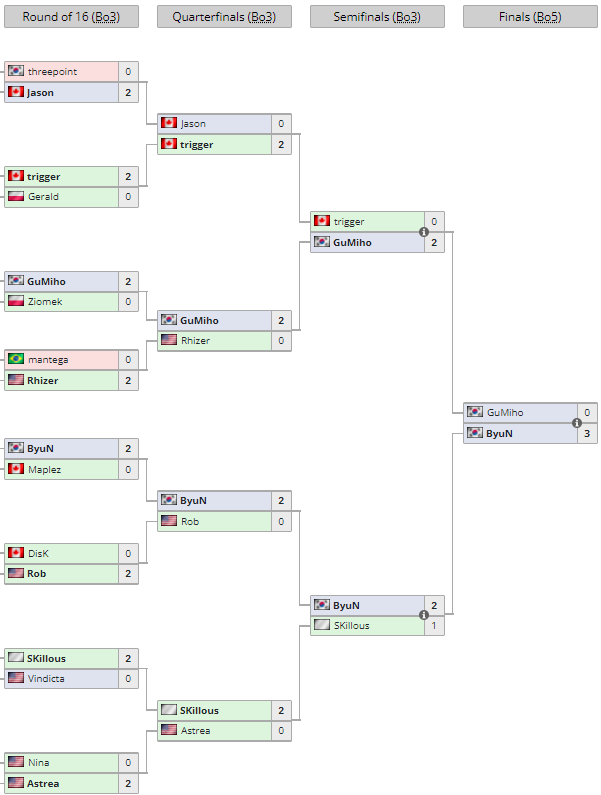 The NA cup had a lot of strong participants, albeit the recent dominant force that is MaxPax did not participate for the second straight week. Still, with players like Dark, ByuN, GuMiho, Astrea, NightMare, trigger, and SKillous in contention, the cup was hardly lacking for talent.

A shocking upset happened as early as the round of 32, with amateur KR Zerg threepoint beating the former World Champion Dark 2-1 (unfortunately, I did not find any VOD to see how it happened). Even considering the fact that Dark is significantly worse in weekly cups than in big tournaments, this was still a completely unexpected result.

Besides that startling Dark upset, SKillous’s strong run up to the semis was the other notable performance in the cup, as he defeated Vindicta and Astrea 2-0 before losing to ByuN 1-2.

As mentioned before, the Dark curse saw ByuN take out GuMiho in the finals, where he won by a one-sided 3-0 scoreline (VOD). Still, the content of the games were a bit closer than the map difference suggested.

The first game on Data-C was a clash of styles, with ByuN opting for standard bio play while GuMiho used his signature mech style. ByuN attacked right after his 2-2 kicked in, while GuMiho had some tanks to defend his fourth that could not cover the attack path to his third. The upgrade advantage, good micro, and superior positioning allowed ByuN to crush the army of GuMiho and win the game.

The second game also went in ByuN’s favor. GuMiho tried to bust through with a 2 base all-in but ByuN managed to defend with a good SCV pull. That left him with enough of a lead to win the game soon afterward.

The last game on Tropical Sacrifice lasted for nearly 16 minutes, but ByuN was ahead from minute 7 and GuMiho just had a very slow death animation. Indeed, ByuN used a very aggressive 2 Medivacs-Tank-Stim Marines push on the natural of GuMiho who went for a regular 1/1/1 build with Ravens. ByuN’s raw DPS allowed him to destroy a lot of army and economy, and he got very much ahead. Following Artosis’ advice of getting more ahead when you are ahead, ByuN out expanded GuMiho and got better upgrades, which allowed him to win the series 3-0 in the end.

Upset(s) of the day: threepoint beating Dark was a titanic upset. His Aligulac odds of winning were probably around 1% at the time of the match, considering that they’ve been bumped up to 2.16% after his victory. Too bad I did not find any VOD, but if I had to guess he used aggressive tactics that worked in his favor, or Dark tried the same approach without much success. However it came about, what an impressive victory!