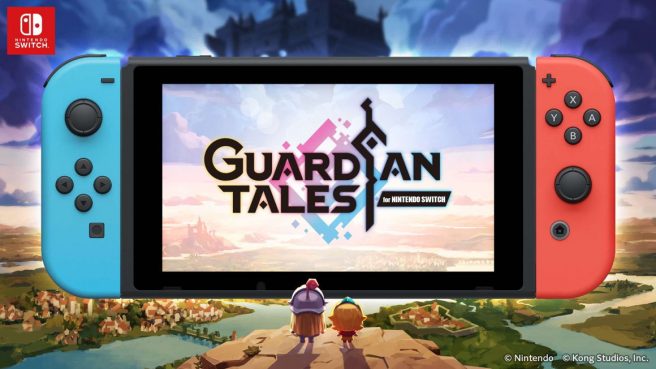 Kong Studios is about to bring its popular mobile RPG Guardian Tales to Switch, the company announced today. Those looking to pick up the title can do so starting on October 3, 2022.

Guardian Tales is an adventure-type RPG that tasks players with saving a kingdom that has been overrun with enemies. Read more about the game below.

In Guardian Tales, a new knight recruit must quickly jump into action after a surprise attack on Kanterbury Kingdom. They must take on the role of the Chosen One and will need to travel the world to find the other 12 Champions. The player will meet various comrades in the many diverse worlds available to explore in the game. Having comrades at the player’s side will be useful in fighting bigger and more evil enemies throughout their quest.

Guardian Tales isn’t all about the main quest! Players with a knack for customization will be able to decorate their floating castle known as Heavenhold once they have progressed far enough into the game. For players who enjoy social media, there’s a feature called FaceBreak. As players go through the stories, certain characters they meet will follow them on social media and post fun and interesting statuses.

Single Player Story Mode: This is the signature mode of Guardian Tales, where players must solve different puzzles to uncover secrets and fight monsters to clear missions.
Guilds: Players can join a Guild with others after progressing through some of the story. There are different events guild members can take part in, like Raids for ranking regards, Meteor Excavation for items, and Guild Conquests, where players fight to win as many rewards as possible.
Customizable Floating Castle: Build up your base of operations at Heavenhold. Players can enjoy different foods and entertainment unlocked throughout their playthrough.
Hero and Weapon Collection: It’s dangerous to go alone! Collect and choose from over 100 different weapons – each with its unique abilities.
Puzzle Solving Gameplay: Lift heavy boulders, throw explosive bombs, and sling yourself across obstacles to discover hidden pathways to amazing treasures!
Intense PvP and Rankings: Assemble and synergize your best party of three heroes to face others in real-time in combat for glory!

And here’s a trailer for the upcoming Switch version of the title:

Guardian Tales will be offered for free on the Switch eShop. Pre-orders begin on September 14. Those that pre-register can receive 100,000 Gold, 3,000 Free Gems, 100 Free Summons (10 per day), 3 Star Equipment (Fantasy Sword), 2 Star Hero (Aoba), and a Rose Knight Costume. After starting the game on Switch, players can check and obtain rewards in the [Mail] menu when logging in during October.