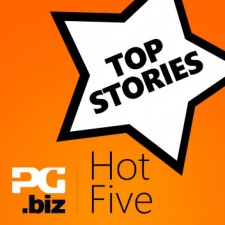 To keep you up to date on the biggest news in mobile gaming, we’ve rounded up the five most-read stories on PocketGamer.biz each week.

Read on and digest…

Currently sitting at a humble 12 titles, the most downloaded game from Netflix is Teeter (Up) with over 820,000 installs.

The most recent game added to the service is Arcanium: Rise of Akhan from indie game studio Supercombo.

Social First has publicly revealed itself for the first time following its foundation in late 2021. Founded by Kukouri founder and CEO Kim Soares and COO Mikko Kähärä, Social First will focus on creating highly social, cross-platform multiplayer games that can be “enjoyed for decades”.

To back its vision, Social First has secured a pre-seed investment backing of $2.5 million from games VC firm Play Ventures and an angel investor syndicate led by Play Ventures partner Joakim Achrén.

3. Pixelynx and Ready Player Me to bring selfie-generated 3D avatars to music metaverse

Ready Player Me allows users to take photos of themselves to create their 3D avatars which can be used across multiple compatible apps and games. Furthermore, users will be able to trade “one-of-a-kind NFT fashion wearables” on NFT marketplaces.

Titling Point has released its Tilting Point Launcher, enabling games from its mobile portfolio to launch on PC and Mac, as well as on the web.

Through a partnership with Xsolla, Tilting Point will be able to offer developer partners cross-platform compatibility options. As a result, the Launcher will also enable games to reach new markets with more methods of distribution.

Riot Games has filed a complaint to the Los Angeles Federal Court accusing Vietnamese mobile games developer Imba of infringing its copyright, alleging that Imba’s idle RPG, I Am Hero: AFK Tactical Teamfight, uses characters, text, and other features from League of Legends.

Riot is requesting that sales in I Am Hero: AFK Tactical Teamfight be blocked and is also seeking compensation for attorney fees and damages.