When it comes to throwback FPS games made by a single person, the bar is surprisingly high. Mostly because of the guy that made Dusk, though. Incision is another such game with a pretty nasty twist that you’ll either love or will completely turn you off of the game. It just entered Early Access and brings with it its first episode. The game is supposed to spend six months to a year in EA prior to full release, so there’s a ways to go yet. But the question stands: is Incision worth it in Early Access, or should you prep more before you make the first cut?

From a brief look, it’s obvious that Incision is trying to elicit the same response as Quake, Blood, and, yes, Dusk. The visuals are very. . . rusty, bringing to mind filthy metal that’s likely to make you itch for a tetanus shot. You play some dude who’s caught in/trying to destroy a group of what I can only imagine are organic creatures that are cybernetically enhanced against their wills to join an evil force hellbent on something something. They’re like the Strogg in Quake II. Probably. You can find bits of lore sprinkled around by looking at sparkly green spots, although I didn’t figure this out until I was in the second level.

The level design is damn good, with a lot of recognizable corridors and great use of space that makes it harder to get lost. Levels can be fairly large as well, sometimes offering a good amount of verticality. The guns are your typical collection at first. Revolver, shotgun, machine gun, rocket launcher. You know the drill. Enemies are decently-varied, from soldiers armed with lasers, strange butchers that launch saws at you, to weird dog things, and techno-assassins that run you down in the halls. 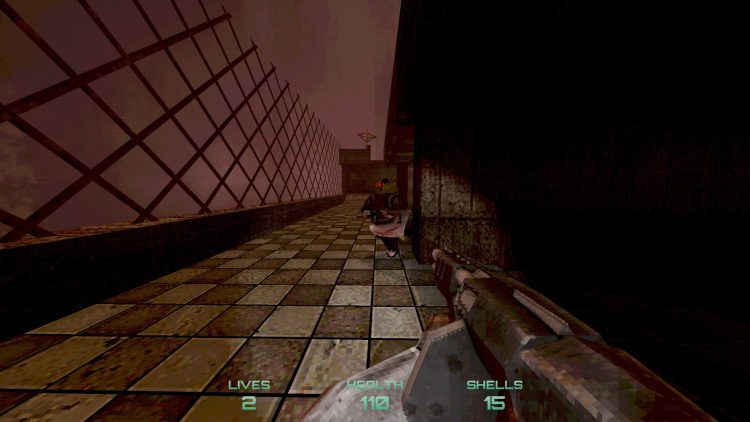 The movement and shooting are above-board, but the double jump doesn’t give you as much air as its equivalent in other games, but strafing and pattern recognition are more than enough to keep you alive when you run into a room full of baddies. But Incision has one choice that’s sure to alienate some people. You can’t quicksave and the levels offer zero checkpoints. Instead, you’ll find extra lives. To accommodate this, the dev has clearly worked hard to ensure that the game feels fair and it does. Mostly.

If I walk into a hallway and don’t happen to see an enemy at one end, which then takes away half my health, that’s my fault. But that also doesn’t mean I want to do the whole level again. I wouldn’t mind so much if levels were just ten minutes or so, but they can be a good deal longer. The second level can easily take upwards of 20 minutes and there’s a good amount of stuff that can catch you off guard. You’re always one or two small mistakes away from death. The game’s design and mechanics are polished enough that this doesn’t remotely have to be a dealbreaker, but it’s decidedly not for me, since I absolutely despise having to do long sections again due to how easily I get bored.

I do have a couple of issues so far. The blood cloud enemies leave behind is an interesting touch, but it can obscure your vision and get you killed, which is no bueno. Similarly, shooting an enemy nonfatally can leave blood in the air, which also obscures your view. The ease with which enemies on higher levels can blast you while you’re unaware is also kind of irksome. You’ll be trying to stay alive while gunning down the enemies in front of you, only for a turret above to tear a chunk out of you before you know it exists.

Incision is a very solid FPS that fans looking for another game to throw themselves at will doubtlessly appreciate. It’s got a suitably unnerving rusty atmosphere and compelling levels to explore, so I’d say it’s already worth it. But only if you don’t mind the lives system. If having to restart a level from scratch when you run out bothers you, you’ll want to steer clear.  The dev says he’s working on a way to mitigate this because he doesn’t have the technical knowledge to put this on. Perhaps the team at publisher Hyperstrange, who made this year’s excellent Postal: Brain Damaged, could give him a few pointers.