The gambling regulator for the southern American state of Mississippi has reportedly approved the sale of the Magnolia Bluffs Casino and Hotel property to Saratoga Casino Holdings LLC.

According to a Thursday report from The Natchez Democrat newspaper, the move from the Mississippi Gaming Commission additionally encompassed the granting of a local casino license that is due to go live from October 3. This concession will purportedly come into effect some six months after the previous owner of the ten-year-old venue, Natchez Casino OpCo LLC, agreed a deal to offload the riverside asset for an unspecified amount.

The newspaper reported that the Magnolia Bluffs Casino and Hotel venue opened in 2012 on the site of an old lumber mill and currently hosts a 45,000 sq ft casino featuring 14 gaming tables alongside a portfolio of over 450 slots. The property situated along the eastern bank of the Mississippi River furthermore purportedly has an on-site sportsbook, a bar and a restaurant together with a 141-room hotel located roughly a mile away nearer the center of Natchez.

For its part and Saratoga Casino Holdings LLC is already responsible for the historic Saratoga Casino Hotel in New York as well as Colorado’s Saratoga Casino Black Hawk enterprise collectively offering a selection of more than 1,580 slots in addition to large portfolios of electronic gaming tables. Sam Gerrity serves as the firm’s Chief Executive Officer and he reportedly disclosed that there are no plans to change the name of the Magnolia Bluffs Casino and Hotel venue or significantly alter its existing workforce.

Reportedly read a statement from Gerrity… 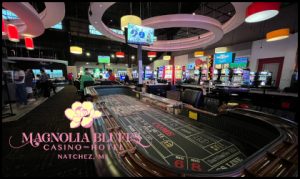 Saratoga Casino Holdings LLC reportedly also divulged that it intends to move the current general manager for its Saratoga Casino Black Hawk enterprise, Tim Morrissey, to Mississippi so as to fill the same position at the Magnolia Bluffs Casino and Hotel property. The operator purportedly noted that this figure has approximately twelve years of experience in the destination casino resort industry and will have his post in Colorado filled by Marcus Rohrbaugh, who presently serves as the Operations Director for its Black Hawk business.

A statement from Morrissey reportedly read…

“I’m excited to join the Magnolia Bluffs Casino and Hotel team and become a member of the Natchez community. I’m committed to operating a first-class gaming facility and building on the success of the current operations and this starts by creating relationships with our guests, team members and the communities that we serve. I’m ready to get started.”