In what appears to be a staged leak, NetherRealm Studios has teased the inevitable Mortal Kombat 12.

A now-deleted tweet by senior production manager Jonathan Andersen showed some artwork lying at his work desk, deliberately arranged to show a teeny tiny bit of his desktop. Zooming in on the desktop shows a reference to Mortal Kombat 12 along with an email that states how franchise fans “eagerly scrape the internet for any trace.”

When to expect Mortal Kombat 12 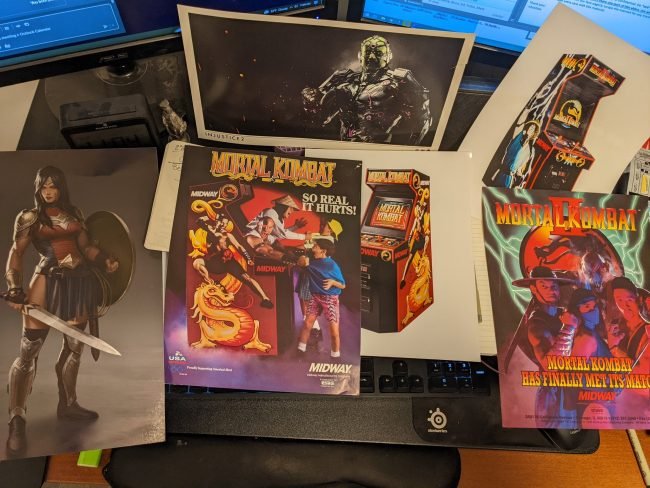 As soon as fans realized that Andersen’s photo was staged, he liked a tweet that suggested this wasn’t a tease, rather a joke aimed towards eager Mortal Kombat fans. But let’s face it, Mortal Kombat 12 is all but confirmed. It’s only a question of when.

If NetherRealm’s release pattern is anything to go by, Mortal Kombat 12 should be revealed this year and it might release sometime in 2023. But this is just speculation and Covid has been battering release schedules so nothing is certain.

All of this begs the question of Injustice‘s release. The last thing we heard about the franchise was a rumor claiming that NetherRealm is prioritizing the release of Mortal Kombat 12 over Injustice amid uncertainty surrounding its future.

For the uninitiated, reports emerged last year that Warner Bros. was looking to offload NetherRealm and LEGO developer TT Games. According to insider and journalist Jeff Grubb, Mortal Kombat 12 is deemed a safer bet than Injustice because it’s a money-maker and wouldn’t run into licensing issues should NetherRealm be sold off. Warner Bros. denied these reports and we haven’t heard anything new since.

In other news, Horizon Forbidden West has finally gone gold and Guerrilla Games showed some off PS4 Pro footage to celebrate. Elsewhere, Ubisoft is shutting down its long-forgotten battle royale Hyper Scape because people didn’t really play it.