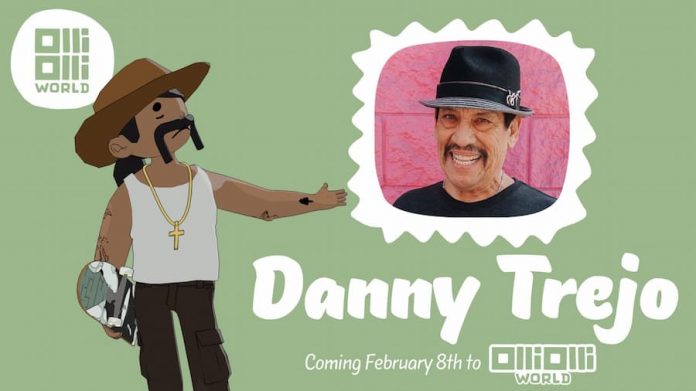 There’s good news and bad news for OlliOlli World. The good news is that machete-wielding, rancor-keeping actor Danny Trejo is a guest character.

The bad news is that, while he’ll dole out a side quest, you can’t actually play as him. Yes, it’s cool that the badass actor is in this slightly silly skateboarding game and, going by the picture developers Roll7 and publishers Private Division have released, his in-game incarnation is reasonably on the money.

But, come on.. you put Danny Trejo in the game and you don’t let players play as him? Really? We’re hoping that Roll7 is just keeping their cards close to their chests and that, in reality, you can secretly unlock him. Even though OlliOlli World doesn’t appear to have voiceovers, it would be very, very cool.

In fact, we’d probably never play as any other character. In our hands on we expressed our appreciation for OlliOlli World’s character customisation, as well as the game as a whole, but it’s Danny Trejo! Maybe that’s the point, that making Trejo playable would undermine all the hard work Roll7 have put into the avatar system.

There’s some small consolation in that, if you complete Trejo’s side-quest you can unlock a specific item for your character – our money’s on the ‘tache. You won’t have to wait long to find out, since OlliOlli World launches this February 8th on PS4, PS5, Xbox One, Xbox Series X, Switch and PC.