The PowerNudge advance serves its purpose well as an alternative to a cascading win system, and appears at all stages of gameplay, including the base game and during free spins when a win multiplier is in play. Every winning combination sees the feature set in motion, causing the reels within the winning combination to nudge down one position. When this happens, new symbols are revealed at the top and all winning combinations on the screen are paid again.

Moving from a barn setting where bails of hay, saddles and the like can be found during base gameplay, to an open pasture when the PowerNudge Respin feature is triggered, the highly volatile 5-reel, 4-row and 40 paylines video slot is playable on any device. The RTP is 96.50 percent, which drops a bit when the PowerNudge Respin bonus round is in effect, and betting ranges from 40 p/c to £/€100 per spin. 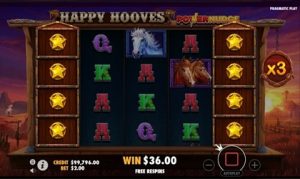 There are four groups of a pair of color coded – blue, purple, green, and red – paying symbols. Each of the color groups has a low-pay royal and a premium horse symbol, with the former consisting of J, Q, K & A, which pay 0.75 to 1.25 times the stake for 3 to 5 of a kind from left to right on adjacent reels, while the latter are worth 1.875 to 3.75 times the bet for landing five of a kind.

There are also four wild symbols in the game including blue, purple, green, and red, each of which substitutes for the corresponding pay symbol.

The free spins round is where you’ll find the innovative PowerNudge mechanic, which is triggered in the base game when a player lands three golden Scatter symbols on reels 1, 3, and 5. Spins continue as long as there is a mystery symbol on the reels. These nudge down a single place on each spins and boost the free spins multiplier by 1x. 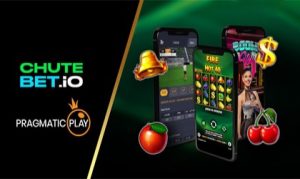 Mystery symbols revealing either color-coded wild symbols or a golden symbol include a random money value, which is displayed as either an attached multiplier or a scatter symbol, which is capable of retriggering the bonus. These mystery symbols can also reveal what is called a Nudge Up symbol, which nudges reels up the number of positions equal to the number of Nudge Up symbols on the screen.

Additionally, the PowerNudge Respin feature has a multiplier that is applied to the win on each respin, as explained earlier. Starting at x1, the multiplier increases by +1 for each nudge and respin.

The new online slot joins other recent releases such as the annual beer fest-inspired October Fortunes, along with the four-game Fire Hot series and Down The Rails, a 5×3 reel title with a max win of 5,000x the bet inspired by London’s Underground rapid transit system. Each of these games can be found in Pragmatic Play’s portfolio of more than 250 titles.

Earlier in the week, the provider took that Slot portfolio, its Live Casino titles and its collection of Virtual Sports products live with Brazilian sports betting and online casino operator Chutebet, further growing its reach in the LatAm region.

Commenting on the collaboration, Cleiton de Jesus Souza, at Chutebet, said: “Pragmatic Play has an outstanding reputation for providing immersive content at scale, and we’re very pleased to partner with them.

“Being able to go live with three verticals through a single integration is vital for us.”