Swedish online casino games developer Quickspin has announced the long-awaited launch of its new Beastwood video slot, complete with a new mechanic offering iGaming aficionados the chance to bank rewards worth up to 29,520 times their triggering stake.

The Stockholm-headquartered firm used an official press release to detail that its latest high-volatility advance features a woodland theme and sees the debut of a new protagonist in Mr Beastwood. The innovator also stated that this character has been ‘packaged up in gorgeous graphics with monsters and beasts’ and could well be rolled out ‘across other games in the future’.

Established in 2011, Quickspin disclosed that Beastwood features its new Endless Reels mechanic based on preceding technology from 2017’s Wins of Fortune video slot and features made popular by the Wild Chase: Tokyo Go game of three years ago. The firm moreover proclaimed that the title ‘promises to be an immediate cult classic’ as it is ideal for those online casino players who are ‘looking for big wins and big production games’.

Acquired by British omni-channel gaming software and services innovator Playtech in March of 2016, Quickspin divulged that Beastwood starts with four reels and should prove especially popular with players in European markets such as Sweden and the United Kingdom. However, the pioneer revealed that this excitement soon increases as new reels are added via improved wins with double multipliers boosting any rewards earned from the fifth reel and every third reel afterward. 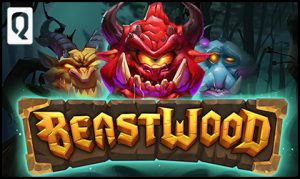 Quickspin asserted that Beastwood additionally comes complete with a trio of selectable return to player ratios in 87%, 94%, and 96% so as to allow iGaming operators to post ‘healthy margins in any market’. It explained that all of this is joined by a ten-attempt free spins feature for those who manage to amass four scatter icons alongside substituting Golden X Wild symbols and a bonus buy attraction.

Clint Andersson from Quickspin used the press release to cheekily declare that the theme behind Beastwood came as a result of ‘extensive research’ that showed ‘monsters usually live in the woods’. The innovator furthermore pronounced that this helped the firm to ‘come up with the name of the game as monsters plus the woods equals Beastwood’ to simultaneously create ‘a spectacular name for the protagonist of our new intellectual property’.

Read a statement from Andersson…

“We set out to create a new mechanic for Quickspin so we wanted a new character to shoulder this. Since the game maths focus on locking symbols in long chains of ways, we came up with the idea of a protagonist using a big harpoon with a gold chain to trap the monster symbols on the reels, which worked out beautifully well with the game mechanic.”