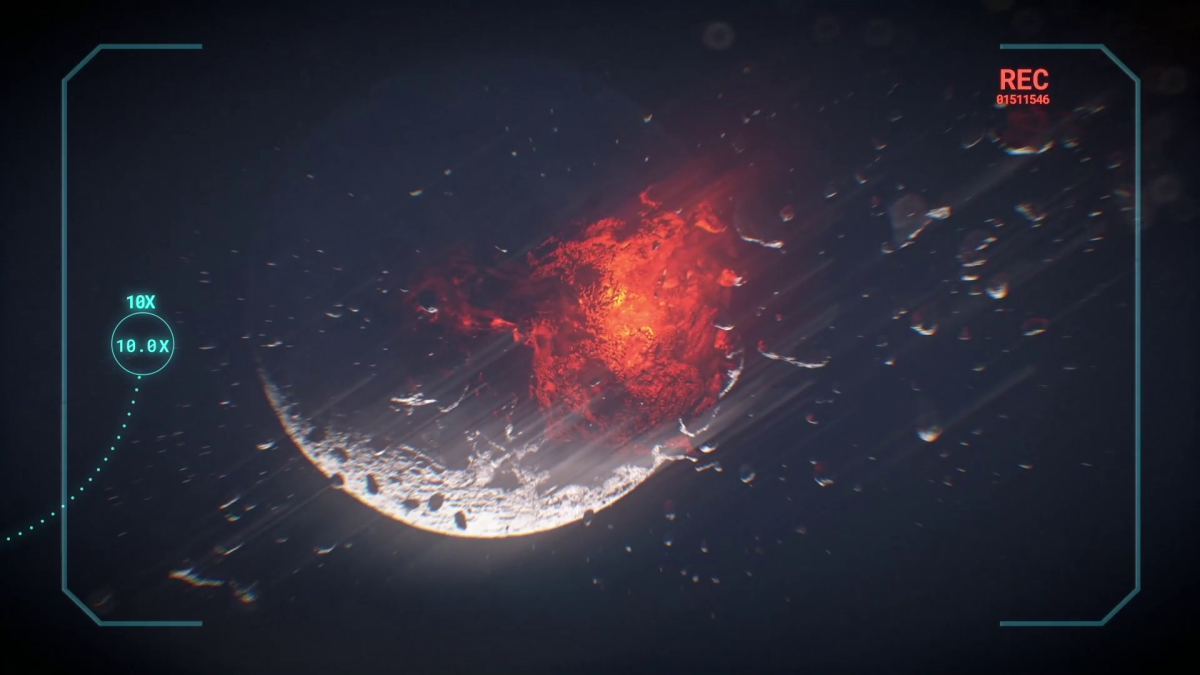 We usually have a good reason for destroying things in videogames. Robots go haywire, zombies try to eat our brains, giant sea monsters knock over buildings, Nazis are Nazis. But what the hell did the moon ever do to us?

It’s a question I’ve been considering since the reveal of upcoming space colony sim Ixion, which kicks things off by casually obliterating the moon in an experimental hyperdrive accident, dooming the Earth to a shower of lunar debris. In doing so, Ixion continues in a long tradition of lunar destruction. For years, I’ve been watching the moon get cracked in half, sent plummeting to earth, or transfigured into some kind of demonic portal. We’re constantly abusing the moon. And honestly? I feel kind of bad about it.

Usually, as in Ixion, we’ve sacrificed the moon for the sake of storytelling. Nothing gives a plot urgency like an imminent lunar apocalypse. But elsewhere, we obliterate it for no reason other than morbid curiosity. If you’ve ever fired up Universe Sandbox, you’ve almost certainly subjected our moon to some kind of simulated cataclysm. Maybe you’ve made it the target of an impromptu meteor barrage, or exponentially increased its mass until it collapsed in on itself as a freshly-minted black hole, taking our solar system with it. Or maybe you just clicked the Explode button and called it a day.

We haven’t spared the moons of fictional worlds, either. Final Fantasy XIV’s Realm Reborn relaunch was ushered in when Eorzea’s moon descended, exploded, and—just to round out the set—unleashed the apocalyptic dragon-god that was imprisoned within it. “Don’t worry,” you might be saying, “Eorzea’s one of those fantasy worlds with an extra backup moon.” And you’d be right. Except I’ve been informed by my friends who won’t stop playing the recent Endwalker expansion that Eorzea’s other moon is, coincidentally, also the prison of a primordial god of ruin. I’m sure it’s fine, though. It’s not like the series has a long and sordid history with moon nonsense.

Our abuse of the moon has spread to the film industry, as well. A movie called Moonfall releases February 4, and as you have probably guessed, it imagines what would happen if the moon fell on us.

“Humanity will face… the dark side of the moon,” the trailer below says, implying that the moon is evil. Pure slander.

The moon attacks don’t even stop at fiction: At one point during the Cold War, the United States and the USSR were simultaneously sketching their own secret plans for “lunar excavation,” by which I mean they wanted to nuke the moon just to show they could. Luckily, cooler heads prevailed, and both projects concluded that blasting our only natural satellite with nuclear ordinance wasn’t a good look.

So, a few decades later, they blasted it with kinetic force instead. In 2009, NASA dropped a “heavy impactor” (space battering ram) onto the lunar surface. This, at least, had a measurable scientific purpose—by analyzing the plume of debris ejected from the 9000 km/h impact, they were able to confirm the presence of lunar water. Which I guess makes it the better option, if you had to choose between nuclear attack and having someone drive a bus into you to see what kind of dust comes out.

But it never ends. Just the other day we learned that one of Elon Musk’s rockets is “on course to crash into the Moon and explode.” The disrespect.

Just like Cold War superpowers and battery magnates, games are always finding new ways to insult the moon, if not destroy it. In Spelunky 2, you arrive on the moon to find it laden with the ruins of a miraculous lunar civilization, and immediately begin the work of bombing, whipping, and shooting everything that moves. In Kerbal Space Program, your efforts as an amateur astronaut will inevitably leave the moon a wastebin, scattered with the wreckage from successful stage separations and failed landings. Meanwhile, the moon in Destiny 2 is haunted by at least three infestations, currently harboring necromantic wizards, alien scavengers, and ghosts from space pyramids. And in Wolfenstein: The New Order, the moon is forced to suffer the worst insult of all: Damn thing’s got Nazis all over it.

Even when we aren’t beating up the moon, we treat it with suspicion. In games like Tacoma, Deliver Us the Moon, and Prey: Mooncrash, we’re left with the impression that any installation or mission on—or just near—the moon is doomed for some kind of catastrophe, whether by mechanical failure or the onset of space madness.

Which leaves the question: Why? Why the obsession with moon catastrophe? I suppose it just comes down to our love of disaster fiction, and that blowing up the moon is a spectacular way to set the stakes. Still, even considering our cultural fascination with mock-apocalypses, we’ve fucked up a lot of moons. If I were the moon, it’d probably seem unfair. The weird apes on the rock next door are actively destroying their own home, but they spend all their time imagining new armageddons to blame me for? Feels a little personal.

If nothing else, mainstream culture could show the moon a little more gratitude if it’s going to keep annihilating it. The moon is sacred to many of earth’s populations, but the USA’s best official effort to show it respect is National Moon Day, which isn’t even a celebration of the moon, but a celebration of the moon landing. Of course the only nod the moon would get is for the time we literally walked all over it.

Sorry, moon. I promise I’ll stop neglecting the lunar activities in Destiny. Thanks for all the tides and stuff.