The survival genre has skyrocketed in popularity in recent years, thanks to successful releases like DayZ and Minecraft among others drawing countless players over and over again. Many more indie developers have all provided their own unique spins on the formula to some great results – and games like Valheim and Terraria have garnered huge critical and commercial acclaim for the same. The future of the genre is looking brighter than ever, with so many promising releases just looming right over the horizon.

Developer Merge Games’ SMALLAND is also one such survival game that’s looking to be an extremely promising experience – one that could very well prove to be the next big surprise hit and reach atop the Steam charts. It looks to be a steaming pot of ideas taken from a multitude of varied inspirations – all of which could very well culminate in a tantalizing experience for fans of the genre. 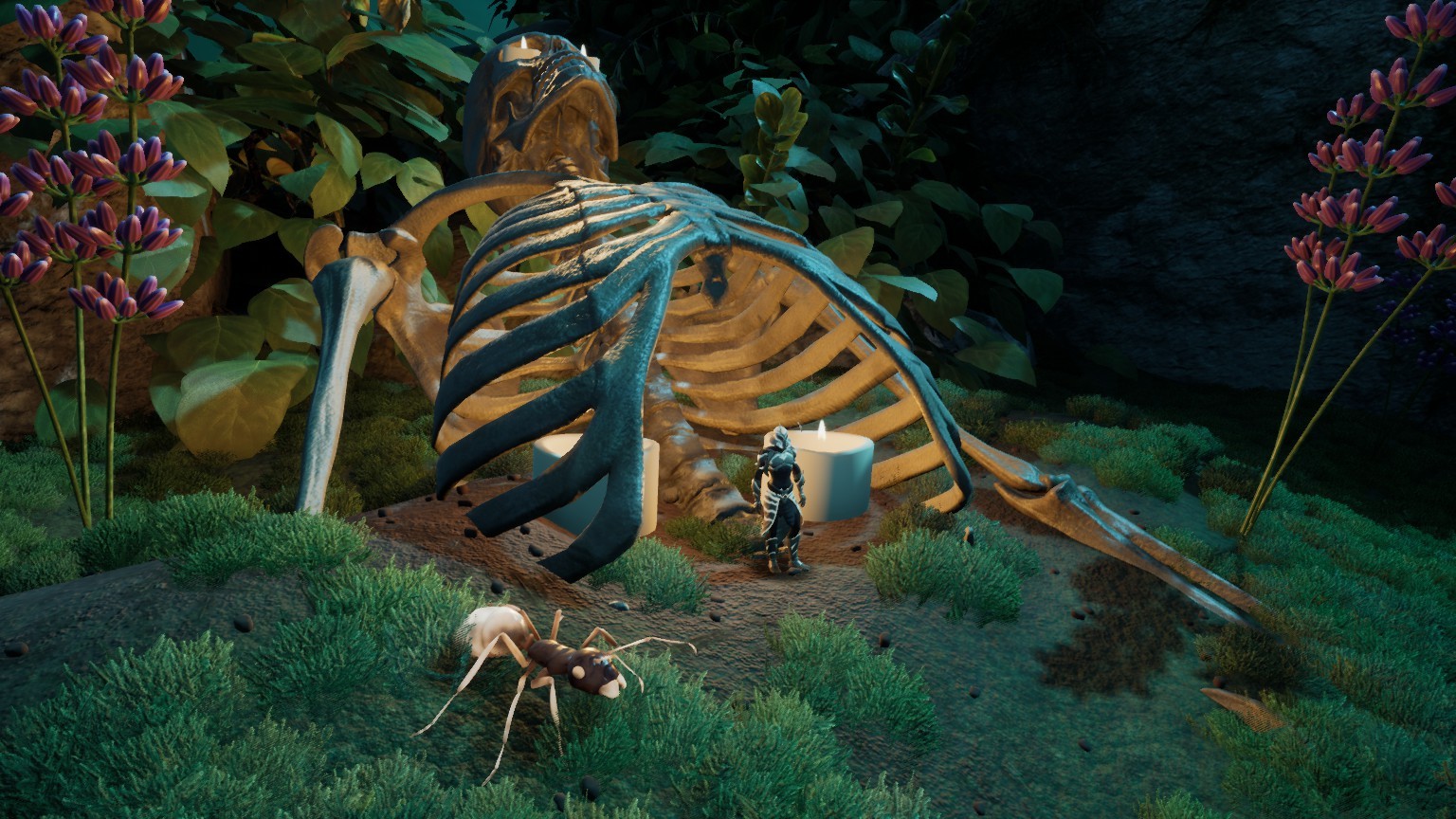 SMALLAND is a multiplayer survival game set against a unique backdrop by the name of The Land of the Small – a place that’s inhabited by lilliputian creatures of various species. Of course, peace doesn’t last long – and the giants have once again seemingly descended from the skies above and now pose an ever-looming threat over these creatures. As a Vanguard, it’s your job to ensure your survival and secure a place for your allies in this hostile environment. It might be a pretty basic setup for a story, but the world itself is a bustling hub with what looks to be a rich history behind it. The developers have stated that The Land of the Small is a world with a hefty amount of lore, which should entice plenty of interested players to search the many nooks and crannies in search of secrets.

And what a world it’s looking to be. From lake-sized puddles of water to towering trees to the many arching blades of grass, SMALLAND boasts a grand sense of scale that you haven’t really seen anywhere else. Additionally, players will also come across many structures left behind by the long-gone giants who once inhabited this vast world that should be a stark contrast to the mostly natural make-up of this gargantuan map. The player character can also climb up trees and glide down majestically from these vantage points, which should give players plenty of opportunities to soak in the majestic environment that the game has to offer. 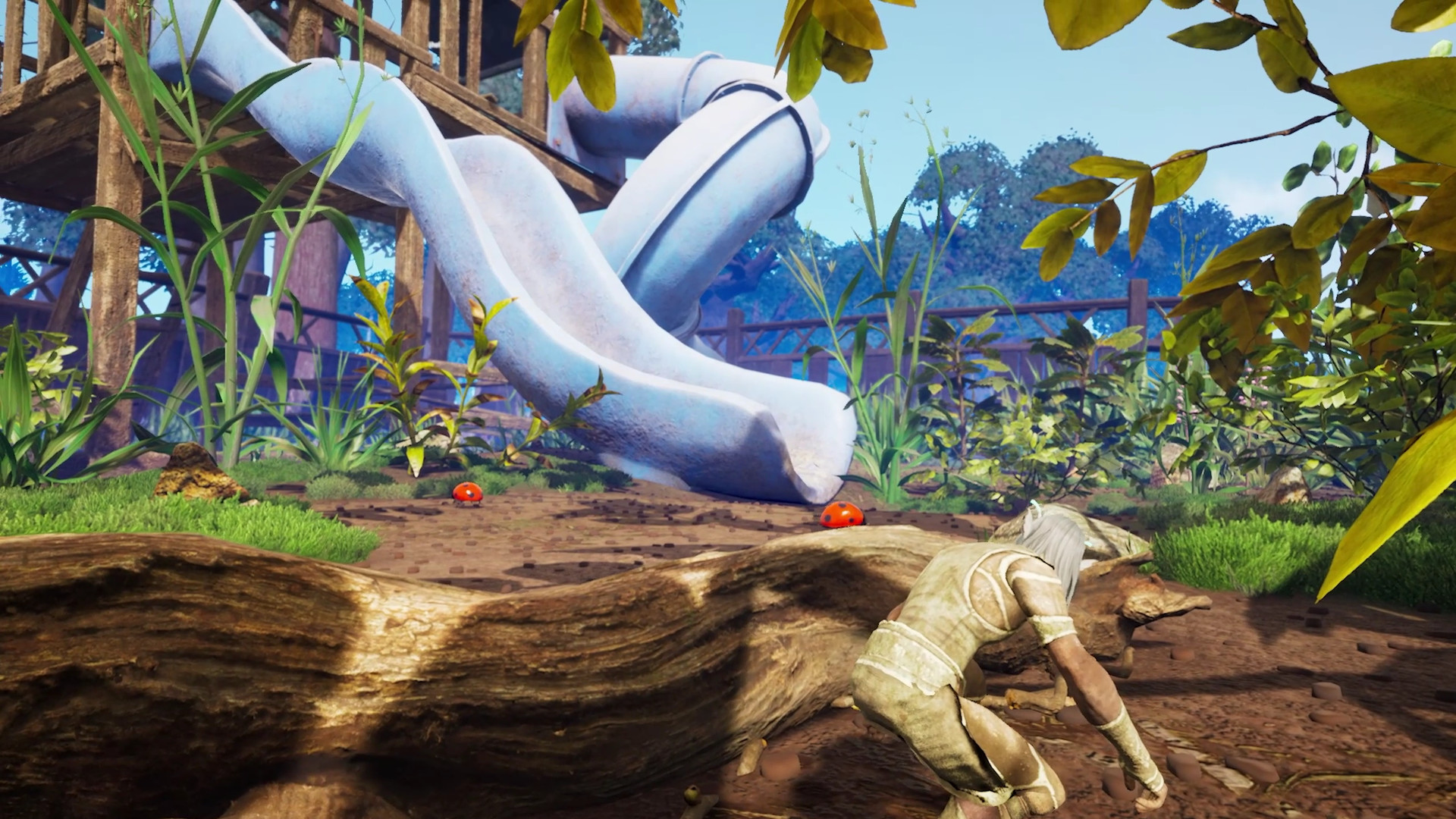 To probably no one’s surprise, most of the creatures that roam these wilds will be friendly to your presence. Players will be facing all sorts of threats spanning the entire food chain – including but not limited to spiders, ladybugs, flies, and more. You could choose to sneak past these encounters or use your weapons to slash or shoot down any foes that stand in your way to pieces. The developers have stated that players will also be able to tame some of these animals through siding with select factions or completing certain questlines which should help make exploration even more exciting than before.

The many denizens of The Land of the Smalls aren’t the only threats that you will face in SMALLAND, as the harsh and ever-changing environment will also be a similarly lethal threat to your existence – forcing you to quickly adapt to your surroundings. SMALLAND features a dynamically shifting season cycle, which will change the surrounding environment such as the colour of the leaves and survival conditions such as temperature. Additionally, enemy spawns and species density will also vary from season to season – so some creatures will be more abundant in one season than the other.

The gameplay will see players exploring the entirety of this gargantuan map and take up the many quests handed out by the NPCs that inhabit these worlds. Many of these quests boil down to collecting x amount of y resources or killing a number of a select enemy type, and these are meant to ease players into the hang of things before letting them loose in this sandbox to do whatever they wish to do. That said, completing these quests will be essential to progressing – as they are the only way you can earn the trust of the many factions that inhabit the various settlements in the game. Doing so will net you rare resources and higher-level gear that would prove essential in surviving through late-game challenges. 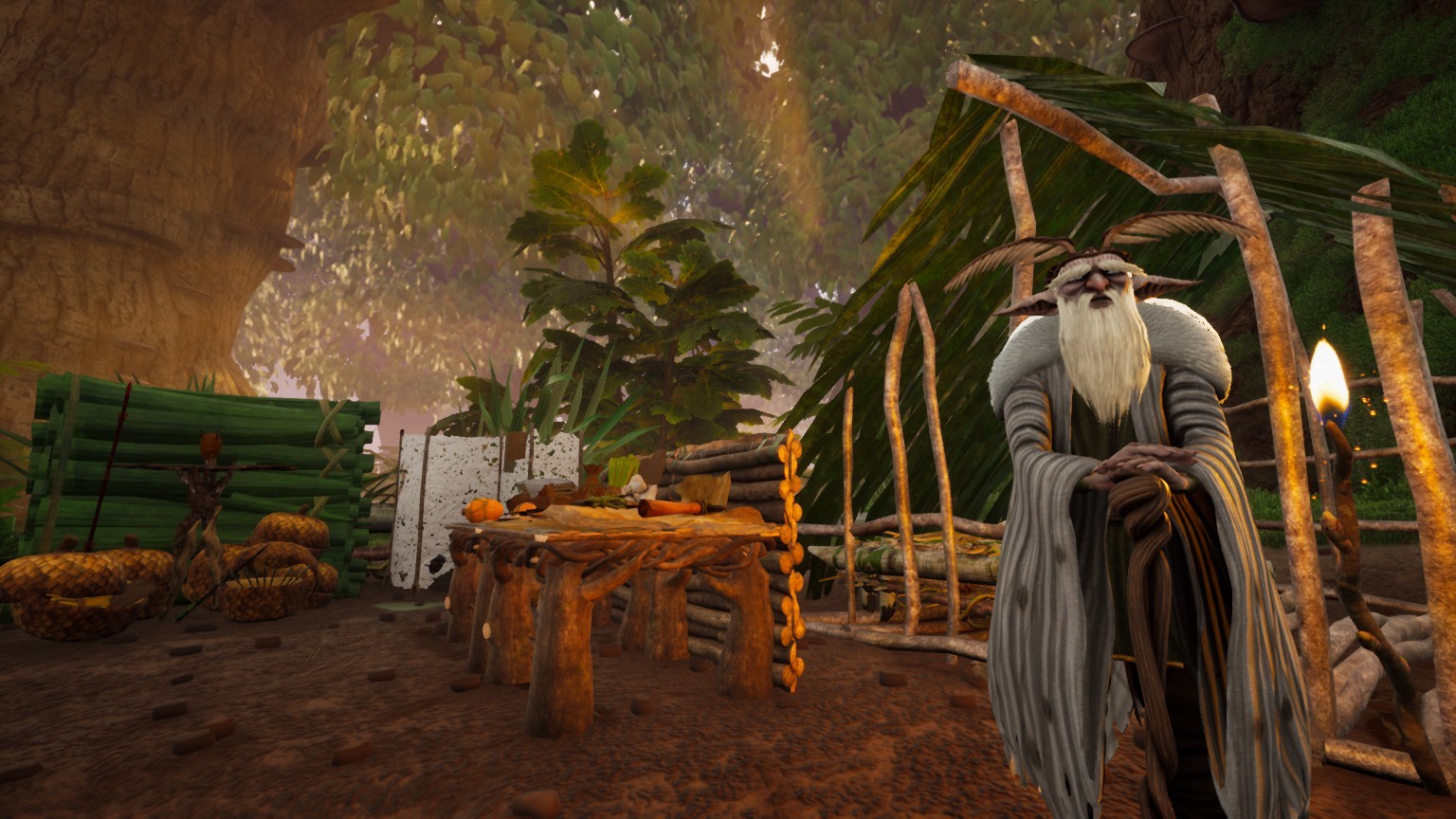 Much like most survival games, crafting remains an essential pillar of SMALLAND‘s core gameplay loop. Players are free to craft a ton of weapons such as the likes of swords, spears, bows, and armor using the many resources lying throughout the world and the loot from defeated monsters. Crafting these higher tiers of weapons and gear is an essential part of progression, as the added power will gradually open up the entire map for exploration. Additionally, players can also construct entire structures like houses and camps that can be used as a base of operations for exploration.

You can rest safely in the confines of these structures, use storage lockers to store important resources for the future, or even use crafting tables to repair, upgrade, or make new equipment. Developer Merge Games has said that it wants players to have a sense of personal expression through the game’s crafting systems, and as such – players will have a ton of options in how they choose to craft their dream home and decorate it with quest trophies and whatnot.

Co-op is yet another important part of the SMALLAND experience, allowing players to invite a buddy for added manpower to take on the tougher challenges of the game. We don’t know how the game will scale with regards to the number of players, but fans should expect to have a challenging experience either way. Merge Games has also stated that there will be some PvP elements in the game as well, although it isn’t known how that will pan out in the final game. 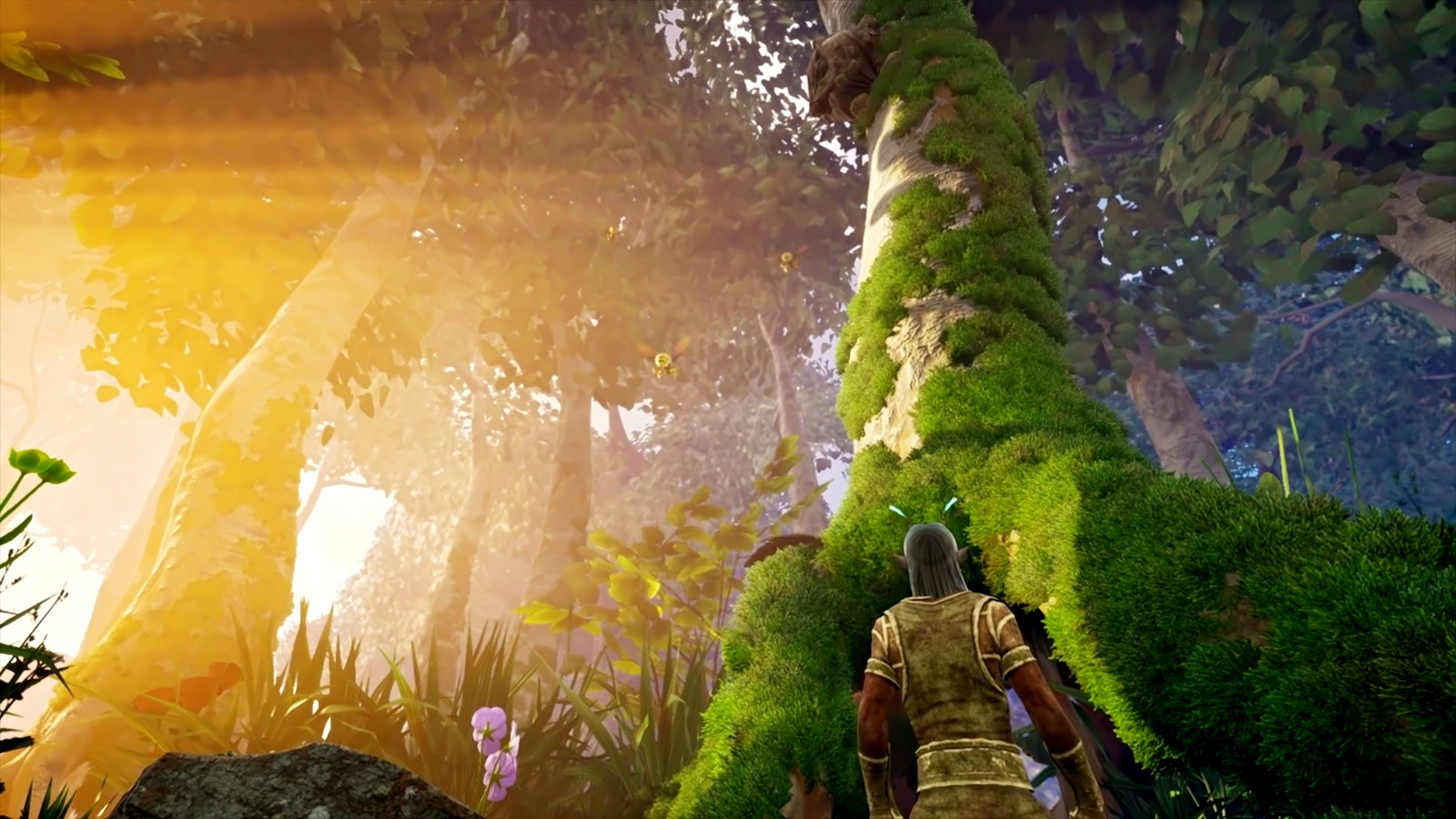 On the topic of release date, SMALLAND was supposed to release sometime last year but was, understandably enough, delayed to this year due to the COVID-19 pandemic. The developer has already hosted a closed beta test for the game, so it does seem somewhat likely that SMALLAND will indeed make it out in time for this year. It’s currently in development for PC only, but it wouldn’t be surprising if Merge Games decides to port the game to consoles if it garners substantial popularity further down the line.

In closing, Merge Games’ upcoming game has enough differentiating factors for it to stand on its own two feet. Here’s hoping it ends up being worthy of all the hype and anticipation, and becomes the next big breakout Steam hit.

Note: The views expressed in this article are those of the author and do not necessarily represent the views of, and should not be attributed to, GamingBolt as an organization.