PS Plus games can be hit or miss. January 2022 gave us a decent selection with Deep Rock Galactic, Dirt 5, and Persona 5 Strikers. However, for many subscribers, February is definitely more of a miss month. Sure, Planet Coaster: Console Edition is pretty good, UFC 5 is okay, but the other one, Tiny Tina’s Assault on Dragon Keep: A Wonderlands One-shot Adventure, has underwhelmed some people.

Why are Subscribers Upset at the February 2022 PS Plus Games? 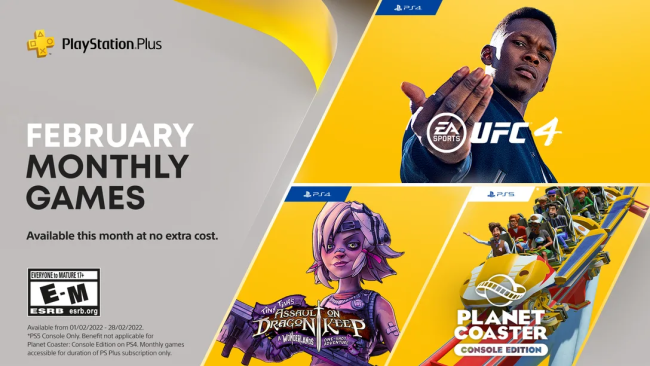 A popular Reddit post pointed out that with Tiny Tina’s Assault on Dragon Keep, Sony is essentially giving the same game twice in a relatively short period of time. In June 2019, one of the PS Plus games was Borderlands: The Handsome Collection. This includes Borderlands 2, Borderlands: The Pre-Sequel, and all the DLC for both. Many subscribers are voicing their frustration that Tiny Tina’s Assault on Dragon Keep is just a repack of a Borderlands 2 DLC campaign that Sony already included in PS Plus two years ago.

Some of those commenting are upset because Sony chose Tina Tina’s Assault on Dragon Keep for this month to advertise for the upcoming Tiny Tina’s Wonderlands instead of a “better” game. Of course, we’ll never know for sure if that’s the case or not, but we have to agree this selection is leaning towards the meager side.

There have been some good-to-great PS Plus months over the past year, especially since Sony has started giving three games per month, one PS5 and two PS4. However, it’s still not up to par with what it used to be. Between July 2014 and February 2019, PS Plus subscribers got two PS4, two PS3, and two Vita games almost every month when Sony moved away from weekly releases. That gave players roughly 72 games a year, which has been halved. Of course, not every month was a winner, but six games a month meant there was a higher chance of there being something that caught your eye.

Do you feel like PS Plus is still a good deal? Let us know what you think below.

In other news, Mortal Kombat 12 gets teased, and Star Wars 1313 gameplay footage was leaked.

The post Some PS Plus Subscribers Aren’t Happy With February’s Games appeared first on PlayStation LifeStyle.