In Nevada and the Station Casinos brand of prominent land-based casino operator Red Rock Resorts Incorporated has reportedly cleared a major hurdle in its plan to bring a new gambling-friendly development to the city of North Las Vegas.

According to a report from the Las Vegas Review-Journal newspaper, the North Las Vegas Planning Commission last week approved the firm’s plan to bring a 600-room venue complete with a 75,700 sq ft casino to a 67-acre plot of land situated on the north side of the Clark County community. This Wednesday consent purportedly means that the whole as yet unnamed project will now be able to have its first reading before the full North Las Vegas City Council on October 5 in advance of a final vote two weeks later.

Rebecca Miltenberger serves as a spokesperson for Station Casinos and she reportedly told the North Las Vegas Planning Commission that the operator is planning to build the envisioned property in two phases for the creation of some 1,100 temporary construction jobs. The representative is also an attorney with local law firm Brownstein Hyatt Farber Schreck and purportedly went on to explain that the company expects the finished venue additionally hosting a cinema, multiple restaurants and banqueting facilities to provide full-time employment for around 840 people including past workers who have been laid off since the start of the coronavirus pandemic.

Red Rock Resorts Incorporated has reportedly been undergoing something of a corporate shake-up after permanently shuttering its locals-focused Texas Station, Wild Wild West Gambling Hall, Fiesta Rancho and Fiesta Henderson enterprises while proceeding with work to bring the $750 million Station Casino Durango enterprise to a 71-acre plot of land in southwest Las Vegas. This rethink is purportedly moreover due to encompass the construction of a Wildfire-branded tavern project complete with 21,000 sq ft of floor space and a sportsbook for the center of Nevada’s largest city. 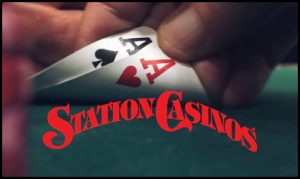 However, this rethink has reportedly angered many previous employees who believe that these recent closures sit in direct violation to the western state’s ‘right to return’ work law. This antagonism purportedly led the Local 226 chapter of the Culinary Workers Union to file a lawsuit against Station Casinos in March seeking compensation for some of the estimated 5,000 people who have been made redundant as a direct result of the firm’s post-coronavirus policies.

Jeffrey Welch serves as the Chief Legal Officer for Red Rock Resorts Incorporated which is furthermore responsible for the 796-room Red Rock Casino Resort and Spa property, and he reportedly responded to these allegations by asserting that the tenets of the Nevada Hospitality and Travel Workers Right to Return Act compel his company to hire back people only to the same venue from which they were earlier laid off. As such and the figure purportedly declared that the law ‘does not offer us the opportunity’ to employ individuals from permanently-shuttered venues although his company later re-hired about one-third of its laid-off workforce.