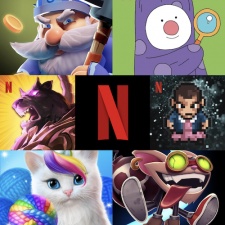 Netflix began its foray into mobile games in November 2021 when it launched five games on the App Store and Google Play available exclusively to Netflix subscribers. As Netflix’s games services continue to grow and brings more to its platform we’ve created a list that compiles all of the games currently available.

Since its launch, the on-demand video platform has continued to add new games to its offerings, albeit at a slower rate than other games subscription platforms.

By January 2021, app intelligence platform Apptopia stated that Netflix games had surpassed over 8 million downloads, with its most downloaded game at the time, Teeter (Up), with over 820,000 installs.

In recent years, Netflix has explored its options surrounding the games industry, which is now the largest consumer media industry, through various new films and series based on video game IP, such as Arcane, based on League of Legends, and an upcoming Tomb Raider animated series.

We have seen Netflix already begin to leverage its own IP in the form of games, with two Stranger Things mobile games. In the future, it is all but inevitable we’ll see more games based on Netflix IP.

To keep up-to-date on the latest mobile games currently in development, make sure to check out our soft launch list, which features Tomb Raider Reloaded, Clash Quest, Pokémon Unite and more.