Scary stuff has a way of sticking in your memory, doesn’t it? The time that clown jumped out at you, or the time you saw that massive spider in the bathroom. It sticks with you.

But not always. Sometimes; when flight beats fight and you start to run, your memory isn’t everything. This is the premise upon which The Red Hood is built.

White Dog’s horror explorer, The Red Hood puts you in the shoes of a little lost girl trying to find right path to visit her grandmother. Unluckily, her grandmother appears to live in a very dark wood, which is home to a stalking axe-wielding serial killer wearing a wolf-head mask. Think Hotline Miami, but as the Big Bad Wolf.

Your mission, quite simply, is to not die, and that means constantly moving forward. If you’re too slow, the encroaching fog will catch up with you and you will succumb to the killer in the mist. However, in your frenzied haste to escape, it’s easy to pick the wrong path through the woods. You don’t want to do that though, because that way axe-wielding psychos lie as well.

Not one to turn away from a challenge, I sat down with the game and started to run. On my very first attempt, I went left at the first fork and was immediately killed. Starting again, this time I took the right turn… but quickly died at the next decision point. The third time I ran into a fog bank and, just when I thought I was about to get up close and personal with a fire axe, I realised that sometimes fog is just fog. Then I died of an axe to the face about a minute later. 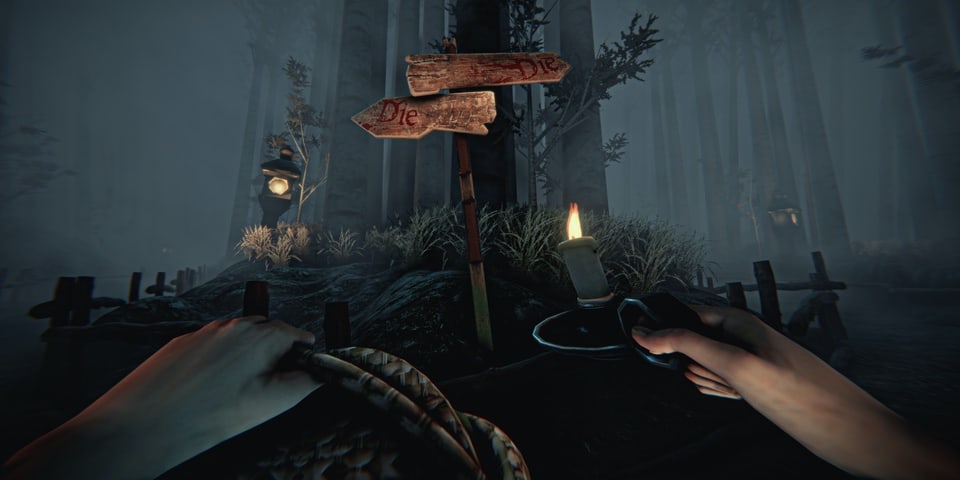 Each time you die, you need to make a mental note of the path you took. This game is not procedurally generated and has a set path to victory. The questions are how quickly you can find it, how well you can remember the route, and how many times you will die in the process.

The problems are that there’s no real clues or indications over the correct path you should be taking, it’s purely down to trial and error, and that once you do know the route, the lack of procedural generation means that you’re done with the game. Then again, this is priced accordingly at just $2 on Steam.

For a game about being brutally murdered, it’s incredibly atmospheric, and fans of the horror genre will no doubt love getting lost in the sound of pounding feet and laboured breathing as they run. You know who you are.

The psychopaths among you out there will be pleased to know that there is PC VR support on the way too. I am nope-ing the hell out of that right now, if for no other reason than not wanting to risk motion sickness. Still, someone here at TSA will no doubt have great fun with the trial-and-error gameplay that is The Red Hood.

The Red Hood is out now for PC via Steam, with PC VR support coming soon.