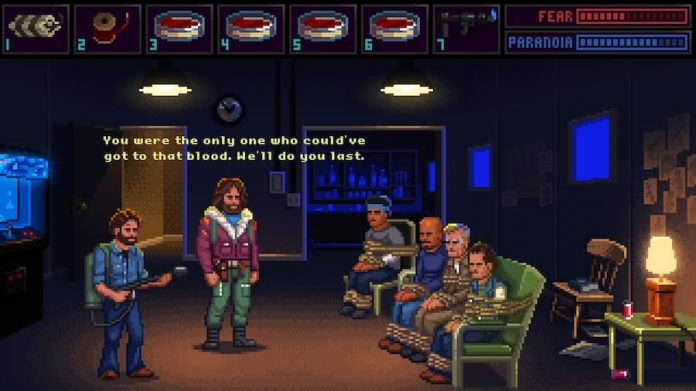 Remember when Lucasarts made a The Thing game? No? That’s because it didn’t happen, but after seeing one artist’s take we’d love to see it become a reality.

We’ve made no effort to hide the fact we absolutely love John Carpenter’s The Thing and, thanks to artist Paul Conway, we’re now craving a point-and-click adventure based on the film. The Thing, despite not being particularly successful at the time, is a cult classic that sees a group of Antarctician researchers dealing with an organism that duplicate other beings.

It’s horrifying stuff, not least thanks to some amazing physical effects and a top-notch cast lead by Kurt Russell. There was a follow-up game released but it was slightly underwhelming. Yes, it was a decent survival horror title but the infection mechanic worked in such a way that, whether you’d tested them or not, characters would “burst out” at scripted points.

Conway’s art imagines the movie as a point-and-click Lucasarts style adventure and we absolutely love it. The picture he posted on Twitter is a mock-up, showing the infamous blood test scene. There’s no actual game behind it, but we’d pay good money to see it become a reality, not least since the aesthetic is a near era-appropriate match for Carpenter’s 80s horror classic.

Here’s the final version of my LucasArts style #TheThing #adventuregame mockup. This was a lot of fun to work on. #pixelart #gamedev. pic.twitter.com/XuehQNZH2w

Is this going to become a.. er, thing? Probably not but if Conway was to find someone to assist him with his idea, funding a full game, or going via Kickstarter we wouldn’t be able to part with our cash soon enough.