No one can elegantly argue under their breath quite like Julia Roberts and George Clooney.

The Hollywood superstar duo have reunited onscreen for the first time since 2016’s Money Monster, and brought back their swift Ocean’s 11 banter for Ticket to Paradise, the latest wedding-based destination rom-com from the director of Mamma Mia!: Here We Go Again, Ol Parker.

In roles specifically written for them, Roberts and Clooney play Georgia and David, a bitterly divorced couple who simply cannot be in the same room without arguing through their teeth. Hissing over shared arm rests, throwing barbs across the middle-seat neighbour on their plane, throwing increasingly fierce public declarations of love at their daughter Lily’s (Kaitlyn Dever) graduation ceremony — the pair imbue Parker and Daniel Pipski’s quick script with every inch of Daniel and Tess Ocean’s combustible chemistry, and it’s a delight to watch them openly despise each other.

When Lily travels with her perpetually partying bestie Wren (Billie Lourd) to Bali, she meets and instantly falls in love with seaweed farmer Gede (Maxime Bouttier), and they decide to get married after dating for 37 days precisely. Worrying their daughter is going to end up making the same choices they did 25 years ago, Georgia and David agree to a rare ceasefire to stop the wedding. 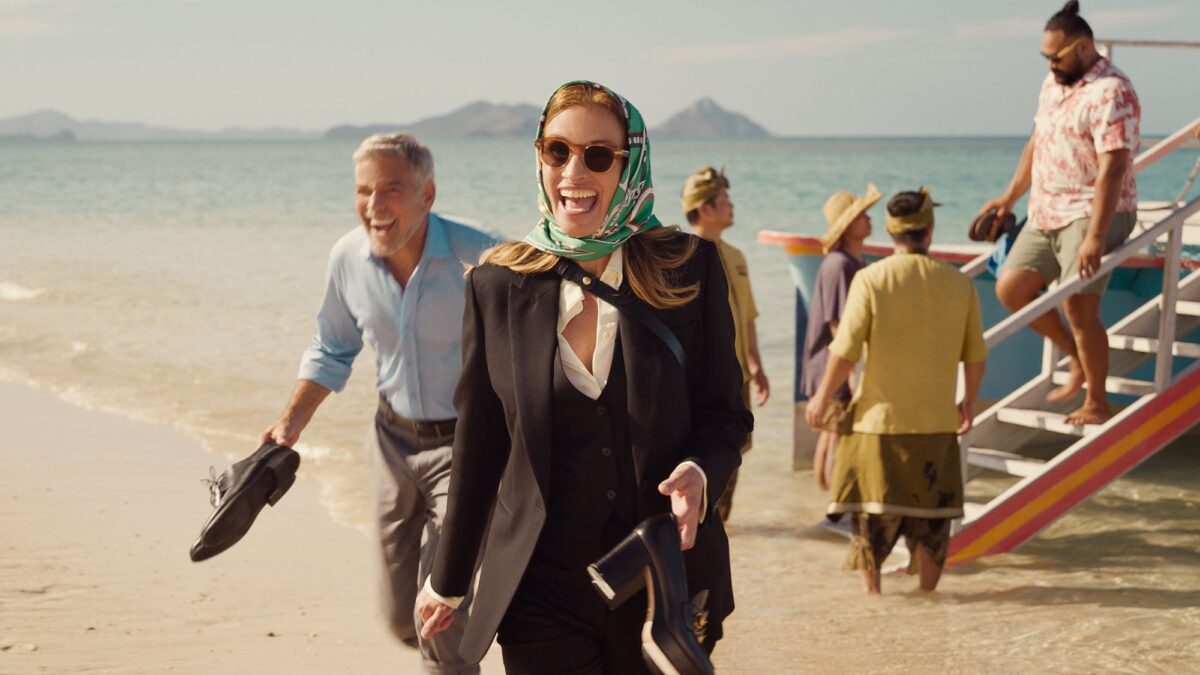 As you probably well know, this is nowhere near Roberts’ first rom-com rodeo, and she’s a surefire leading win for Ticket to Paradise, the eternal Girl Standing in Front of a Boy in everything from Pretty Woman to Notting Hill to Valentine’s Day and Eat Pray Love. And it’s not Roberts’ first time attempting to sabotage a wedding onscreen, having valiantly tried in My Best Friend’s Wedding and Runaway Bride. In Ticket to Paradise, Roberts employs the more subtle but confident elements of her rom-com repertoire for Georgia, who emotionally bounces off her co-star Clooney with the greatest of ease.

Clooney, meanwhile, hasn’t done a romantic comedy since 1996’s One Fine Day, and takes on the disgruntled, mansplaining, overprotective dad trope with less ferocity than Robert De Niro in Meet the Parents (who can top an FBI-level investigation hub in a trailer?), but all the mildly perturbed finesse you’d expect. No one casually pauses through a monologue like Clooney, who constantly sounds like he’s in a state of poignant reflection even when explaining the rules of beer pong. 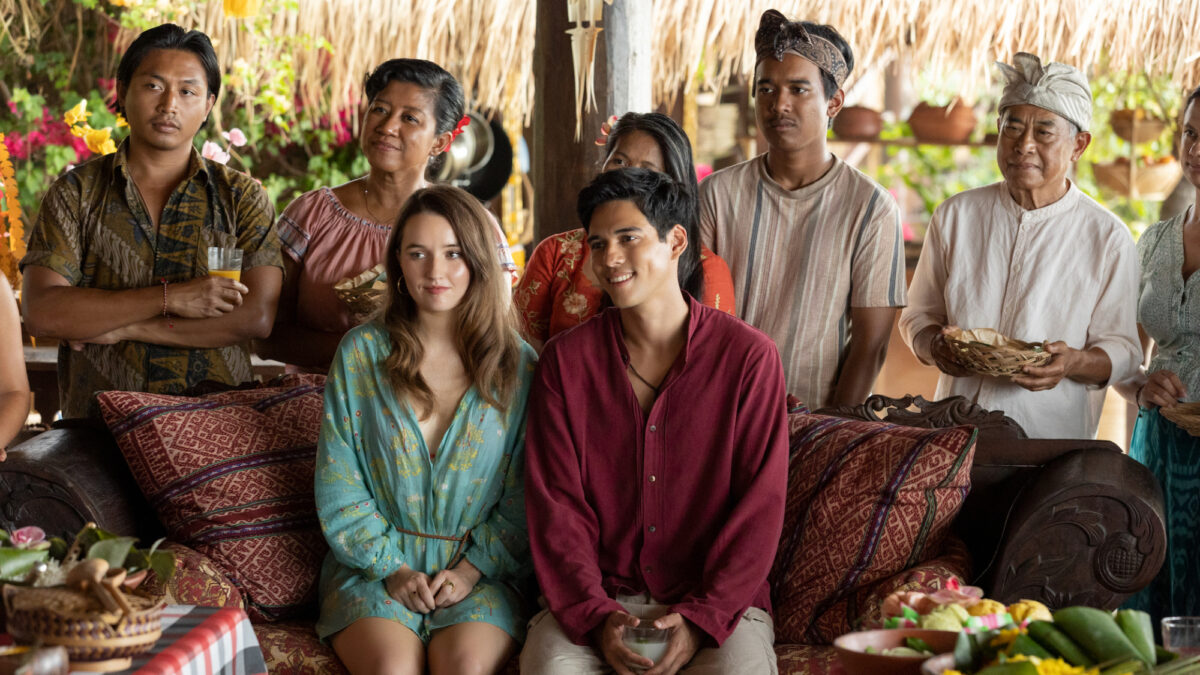 As in Mamma Mia!, the engaged couple aren’t nearly as much of a draw as their parents in the film, but Dever and Bouttier make a sweet core pair as Lily and Gede, clinging to each other through the meeting of their sets of parents and perfectly cringing through Clooney and Roberts’ moments of drama, including an arak-fuelled dance-off to Jason Nevins and Run-D.M.C.’s “It’s Like That” and House of Pain’s “Jump Around” that is as face-palmingly ridiculous as Pierce Brosnan singing “S.O.S.”

Parker sets up the pieces for the ol’ lovers-to-enemies-then-back-to-lovers arc, throwing bitey dolphins, Georgia’s overly keen boyfriend Paul (a spectacularly silly Lucas Bravo), and rainy nights in the Balinese jungle in Georgia and David’s path. Parker uses every trick in the classic rom-com book for Ticket to Paradise, even opening the film with a Los Angeles city skyline shot — it’s no surprise the director took the film to Working Title, the studio responsible for ’90s/’00s rom-com cornerstones like Four Weddings and a Funeral, Notting Hill, Bridget Jones’s Diary, and Love Actually.

But more specifically, the film borrows from Parker’s Mamma Mia! experience to tick off the crucial elements of that rom-com subgenre: the destination wedding rom-com. Characters find themselves out of their depth in a beautiful part of the world, navigating new family members, getting acquainted with cultural differences and customs, and building up to the film’s natural finale: the big wedding — think Crazy Rich Asians in Singapore, the fictional Greek island of Kalokairi in Mamma Mia!, Kakadu and the Tiwi Islands in Top End Wedding, and Pam and Greg’s Owen Wilson-pan-pipe-scored Miami wedding in Meet the Fockers. Even Keanu Reeves and Winona Ryder played intolerable wedding guests in stunning San Luis Obispo, California, for the self-consciously named Destination Wedding. 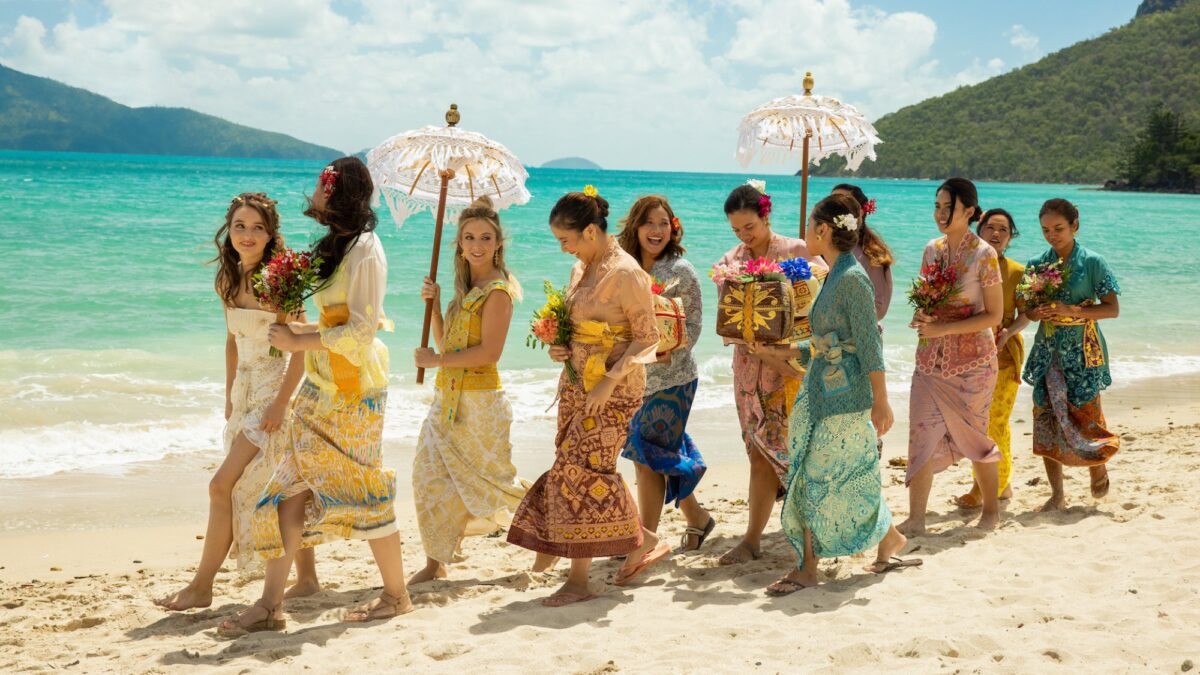 With Judy cinematographer Ole Birkeland as director of photography, Ticket to Paradise tries to offer the audience exactly that, with grand sweeping shots of spectacular beaches and mountains, water-level shots of aquaculture farms heaving with bright seaweed, and picture-perfect frames of the main stars clad in lush wedding outfits from The Adventures of Priscilla, Queen of the Desert costume designer Lizzy Gardiner.

The exact location of “paradise” is never given; it’s just generally located on the Indonesian island of Bali (though it was actually filmed off the coast of Queensland, Australia, in the Whitsunday Islands). But the film does take pains to get this element of the film right, casting Indonesian actor Bouttier as the romantic lead for a start. According to producer Tim Bevan, the team had cultural advisors from script to filming, including cultural consultant Agung Pindha, who also happens to play Gede’s dad in the film. According to the studio, Pindha was heavily involved in decisions around the film’s representation of Hindu Balinese wedding rituals (like Gede’s teeth filing ceremony as a rite of passage), traditional decorations, and food served, such as the babi guling (roast pig) feast.

Ticket to Paradise is exactly that, a fun destination wedding rom-com with Hollywood megastar leads and a savvy script, filmed in a truly magnificent location. You’ll probably add it to your regular Mamma Mia!-adjacent rotation.

Ticket to Paradise is coming to cinemas Oct. 21.