There’s really no getting around it; Turbo Golf Racing is going to be endlessly described as “Rocket League but golf”, and I’m going to assume that Hugecalf Studios are perfectly happy with that comparison. On the one hand it’s pretty reductive, but getting compared to one of the most popular games of the past decade? That can really only be a good thing.

With the exceptionally brief elevator pitch out of the way, how does Turbo Golf Racing blend together its sporting and gaming inspirations?

Up to eight players can line up for a race online, and right out of the gate it’s clear that the regular rules of golf have been largely thrown out the window. There’s no need to worry about the number of strokes you take to get to the hole, there’s no need to wait for your ball to stop rolling, and there’s no concerns over taking turns. This is everyone racing together, all at once, dashing for the finish.

With that in mind, you’d expect it to be complete and utter chaos right from the first instant, but thankfully you don’t need to worry too much about the other players as collisions with them and their balls are disabled. The only way to interfere with another player is to grab the homing missile pick ups and fire them off to stall another player’s momentum. It’s a good call in order to avoid any kind of griefing and abuse in Turbo Golf Racing, even if you get the impression from trailers and the game’s pitch that full on chaos will reign. 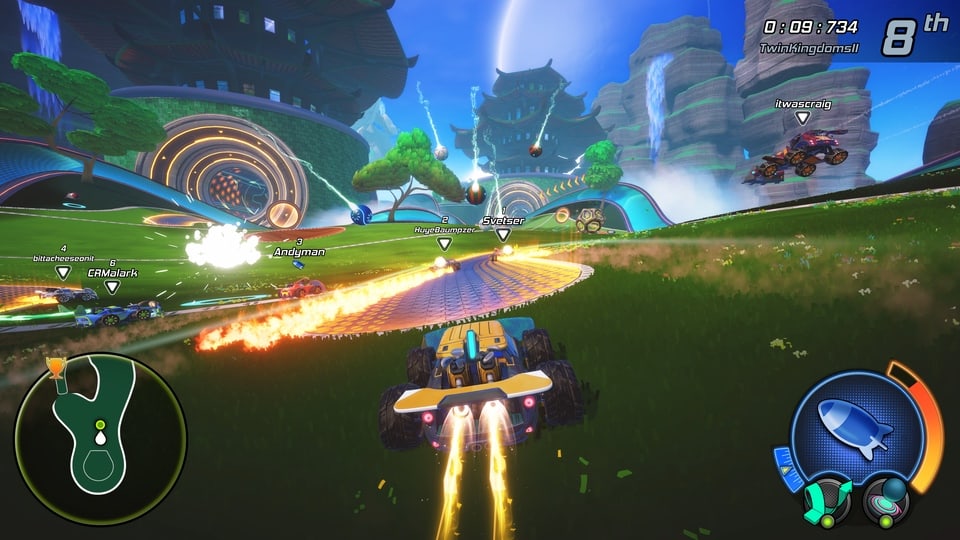 So that lets you really focus on your ball and what you’re doing. As you hare after your golf ball, you always get to see a projected trajectory so you know where it’s going to travel to as you hit it. That’s vital considering how quickly you can get around the world and how you want to try and direct the ball through boosts and past hazards. Boost rings hang in the sky that send your ball flying before disappearing so that other racers can’t follow you, while reaching the “putting green” features a generously cavernous hole with a tractor beam ready to ensnare balls and draw them in – a more controlled final putt will be drawn in a bit quicker than a wilder strike, which could mean everything in this three-part race.

Getting around is about as intuitive as you’d like for an arcade-y racer, and your regular driving is augmented by a rocket boost, jump and glide abilities, which I’m sure advanced players will take advantage of about 5 seconds after the game comes out! You have two camera modes – one follow cam and one locked to the ball – which Rocket League players will be instantly familiar with. The boost is drained relatively quickly, but you can drive across large charge patches like it’s an F-Zero game, and it’s refilled a tad whenever you tap your ball. Sometimes you’ll be booping the ball quite a lot to get out of an awkward corner. 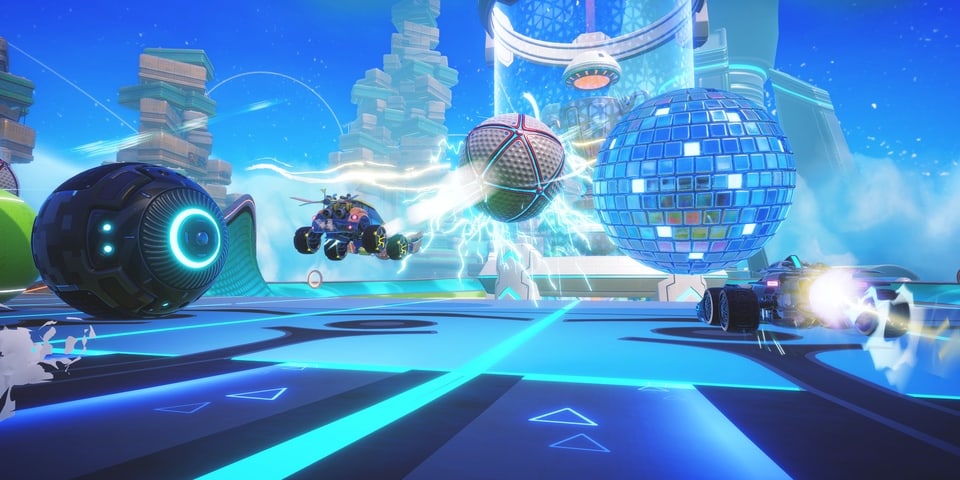 The courses you tackle are completely out of this world. Each matchmade game throws you together for three holes in quick succession, each one a broad and open sprawl of greens to navigate with occasional clumps of trees, sand bunkers and more getting in the way. They’re all seemingly hanging in the sky with gigantic abstract golf-y architecture floating around in their backdrops. Each hole can wend back and forth, sometime doubling back around underneath itself in inventive and engaging ways. It’s really quite arresting for a basic golf course theme, and I’m looking forward to seeing what the full game and post-release expansions can offer.

So what’s this game’s biggest problem? Well, you’ve read this far, but can you remember what this game is called? I myself have to think just a bit too hard to remember that it’s not called Rocket Golf League, the legally distinct Turbo Golf Racing just being a tad too bland to stick in my memory. 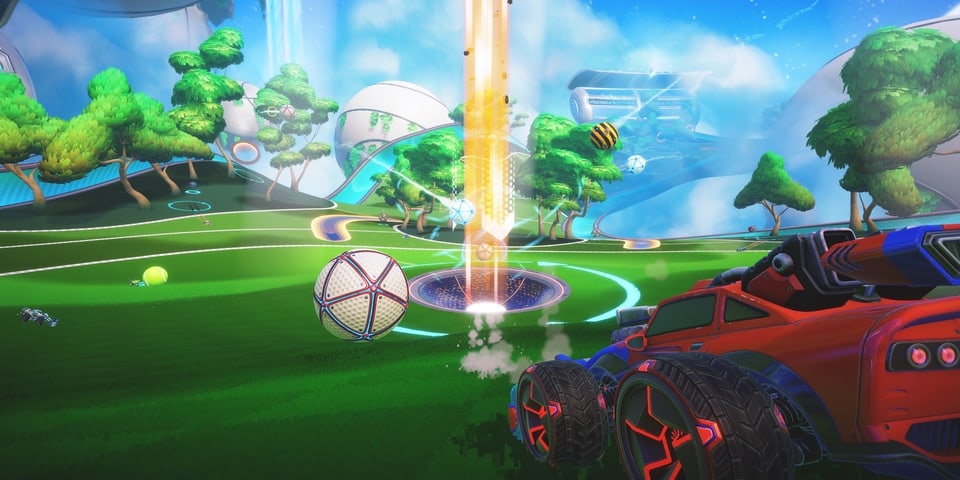 Give it a play, though, and I think you might actually enjoy it as much, if not more than the evergreen car football. The action comes in shorter bursts, the onus is on your own relative skill, as opposed to a collision-filled head-to-head, and there’s the potential for some really wild course designs to emerge. This is definitely one to keep an eye on, just make sure to write the name down somewhere so you can remember it.