In the American state of Illinois and casino operator Hard Rock International has reportedly announced that it will be holding a special ceremony on Wednesday afternoon to mark the start to construction of its Hard Rock Casino Rockford venue.

According to a report from local television broadcaster WIFR-LD, the ground-breaking event is set to take place some ten months after the firm premiered its temporary Rockford Casino: A Hard Rock Opening Act enterprise to much acclaim. This news purportedly also follows the envisioned $310 million project’s September 7 receipt of the required green light from the Illinois Gaming Board to begin foundation and utilities work.

The interim Rockford Casino: A Hard Rock Opening Act venture reportedly opened in November on the site of the Winnebago County city’s former Giovanni’s Restaurant and Convention Center hosting a pair of restaurants, a Hard Rock-branded shop and a casino offering a selection of over 640 electronic gaming tables and slots. The Illinois Gaming Board purportedly revealed that this facility has since gone on to rake in more than $25 million in revenues and is now due to be replaced from the autumn of next year by the more permanent Hard Rock Casino Rockford endeavor.

Hard Rock International reportedly disclosed that a selection of its executive team is expected to join with a variety of local political leaders including Rockford mayor Tom McNamara to welcome the start to construction of its Hard Rock Casino Rockford. It purportedly went on to note that next week’s festivities are to moreover include an appearance by Cheap Trick guitarist Rick Nielsen, who grew up in the northern Illinois city and is destined to have a giant facsimile of his iconic Hamer Checkerboard Explorer guitar adorn the entrance to the coming gambling-friendly development.

Jon Lucas serves as the Chief Operating Officer for Hard 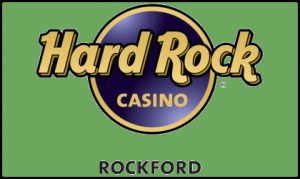 Rock International, which is a vehicle of the federally-recognized Seminole Tribe of Florida, and he reportedly detailed that the finished Hard Rock Casino Rockford enterprise will feature around 64,000 sq ft of gaming space in addition to a 1,600-seat Hard Rock Live-branded entertainments venue and a plethora of dining options. The experienced executive purportedly furthermore divulged that the completed 25-acre venture on the site of the community’s former Clock Tower Resort facility is set to provide over 1,000 full and part-time jobs and could well be joined at some point in the future by an adjacent 250-room hotel.

A statement from Lucas reportedly read…

“Our opening act in Rockford has been fantastic but I know the entire Rockford community is just as excited as we are for the main show. From the very start, Rockford’s energy has surpassed expectations and it’s no secret it is really ready to rock. Building on that momentum and with the incredible support from the Illinois Gaming Board and the Rockford community, we’re ready to begin the next chapter.”