Play’N GO has decided to travel back in time to the prehistoric era on the reels of its new online slot Mount M. The game is set at the base of Mammoth Mountain, where prehistoric men worship the mighty beast. The men want to see better health, good luck, and wealth provided by the mammoth. Men who travel to the top of the mountain and perform a sacred ritual are said to receive help from the great Mammoth Spirit.

The new online slot game takes on this mystical theme with plenty of extra features, unique graphics, and animations. It’s a unique take on the prehistoric theme and provides something new and exciting from this top-rated developer.

Load the reels of Mount M, and you enter the icy world of the prehistoric era. The reels are constructed from sinew and bone with royal icons created from tusks, and the game grid features creatures from the time period. 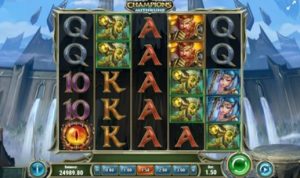 Collect orbs as you play that are carried by wilds to expand the three middle reels up to eight spaces high. This adds more win potential to the game. When the reels expand, an animal symbol is upgraded randomly to a mammoth, and one spin is provided.

Any wild that lands, when the middle reels are glowing from expansion, will lead to a respin of the reels. In this spin, one to four reel expansions are unlocked and the same number of animal icons will be upgraded.

Play’n GO Head of Games Charlotte Miliziano, commented on the new title by stating: “We love to tell stories through our features. The expanding reel isn’t just an innovative feature, but another tool to tell the story of Mount M, helping the player on the journey to the top of the mountain. Creating an experience is what we do best.”

The new Mount M online slot game was released just days after Play’n GO announced the launch of a new Benny the Bull Title, Bull in a Rodeo. The new online slot game offers a fun take on Benny, with the bull participating in a rodeo.

Both games feature larger-than-life creatures in unique environments, with plenty of extras to trigger on the reels. Give both titles a try to see a unique way that the developer creates its online slot titles.