Multi-product content provider Pragmatic Play is “confident” players will enjoy the journey to Ancient Egypt by way of its latest action-packed slot release, Book of Golden Sands, complete with multiplier wilds, expanding symbols and a max win of 10,000x the bet!

The developer‘s new video slot has 6 reels and 3 rows and 729 winning ways, which occur when at least three matching symbols land on adjacent reels starting from the far left side. Playable on any device, the high volatility game has a theoretical RTP of 96.46 percent which decreases to 96.38 percent when choosing the “Buy Free Spins” option if eligible. Bets range from 20 p/c to £/€100 ($0.20 to $100)

Boog of Golden Sands has 11 regular pay symbols, including five low-pays which display images in keeping with the Egyptian theme such as the ankh and the Eye of Horus and pay 1.25-1.5 times the stake for landing between three and six of a kind. Next in line are three pieces of Egyptian jewelry and three character symbols worth 2 to 5 times the bet for landing from three to six of a kind. 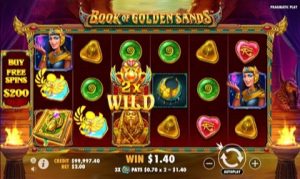 Players who land at least three book symbols during base gameplay will activate the free spins round. What that happens, the game randomly selects a special expanding symbol to be used throughout all 10 free spins awarded.

During this bonus round, whenever at least three special symbols land they expand and cover the entire reel. This action also sees one of these symbols added on top of the respective reel, with any additional expansions (up to 10) being connected to this symbol addition, where the winning potential is further increased. 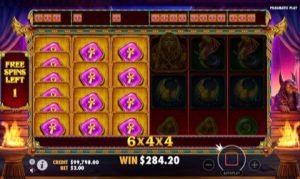 Furthermore, landing at three or more scatters will extend the bonus round and award 10 extra free spins. There is no limit on retriggers and whatever symbol is chosen will stay the same throughout.

And, depending on the jurisdiction you’re playing in, you can also instantly trigger the free spins round from the base game via the Buy Free Spins button, for the cost of 100x the total stake. The max win is 10,000x the bet in base gameplay and free spins.

“We are excited about the launch of Book of Golden Sands™, as we have augmented and adapted the traditional book-style game that many players are drawn to.”

The COO explains that they have included wild multipliers in the game, awarding even more ways to access the bonus game, and a “universally adored Egyptian theme to create a title that we are confident players will enjoy.”

Book of Golden Sands joins other hits such as the recently released classic fruit slot-themed Striking Hot 5, along with Happy Hooves and Octobeer Fortunes, each of which are part of Pragmatic Play’s fast-growing collection of 250-plus titles in its games portfolio.