It’s Season 6 in Sea of Thieves, and that means new mysteries and adventures await. The highlights of this season’s new content are the new Sea Forts, housed by phantoms and designed to be quicker takes on the long-standing Forts in Sea of Thieves. Rather than a dozen or more rounds of battling skeletons, these new Sea Forts take only a few minutes to complete, though they retain the lucrative qualities of the legacy Forts. Here’s all you need to know about Sea Forts, including where to start them, how to beat them, and what’s going on with that Prison Cell Key.

Sea of Thieves – What are Sea Forts?

These pyramid-like fortresses made of stone have emerged from beneath the sea as Captain Flameheart’s influence across the pirate realm continues to regain its dominant position. You can travel to any Sea Fort and dodge a few cannonballs before docking and heading inside to fight waves of Flameheart devotees.

After five rounds of the horde-like PvE combat, the Phantom Captain will emerge as your boss to battle. Defeating the Captain will cause them to drop their Fortress Treasury Key, which is used to open the main loot room of the Fort, found just one floor above sea level. Inside that treasury, you’ll find lots of Damned treasure–the ghostly green chests, skulls, and supply caches–but all around the Fort either during or after your fight with the phantoms, you’ll find other loot scattered about.

Once the dust settles, be sure to gather all of this loot. You earned it. Also, note that Sea Forts have a lot more interactivity to them than typical Forts. On every floor, you’ll find cabinets, crates, and dressers that open, and in most of these, you’ll find even more trinkets you can trade for gold. Best of all, you can even find a second key, the Fortress Store Room Key, that opens an extra loot room on the top floor of the Fort. This will be stashed in a random hiding spot each time you arrive at a Sea Fort. 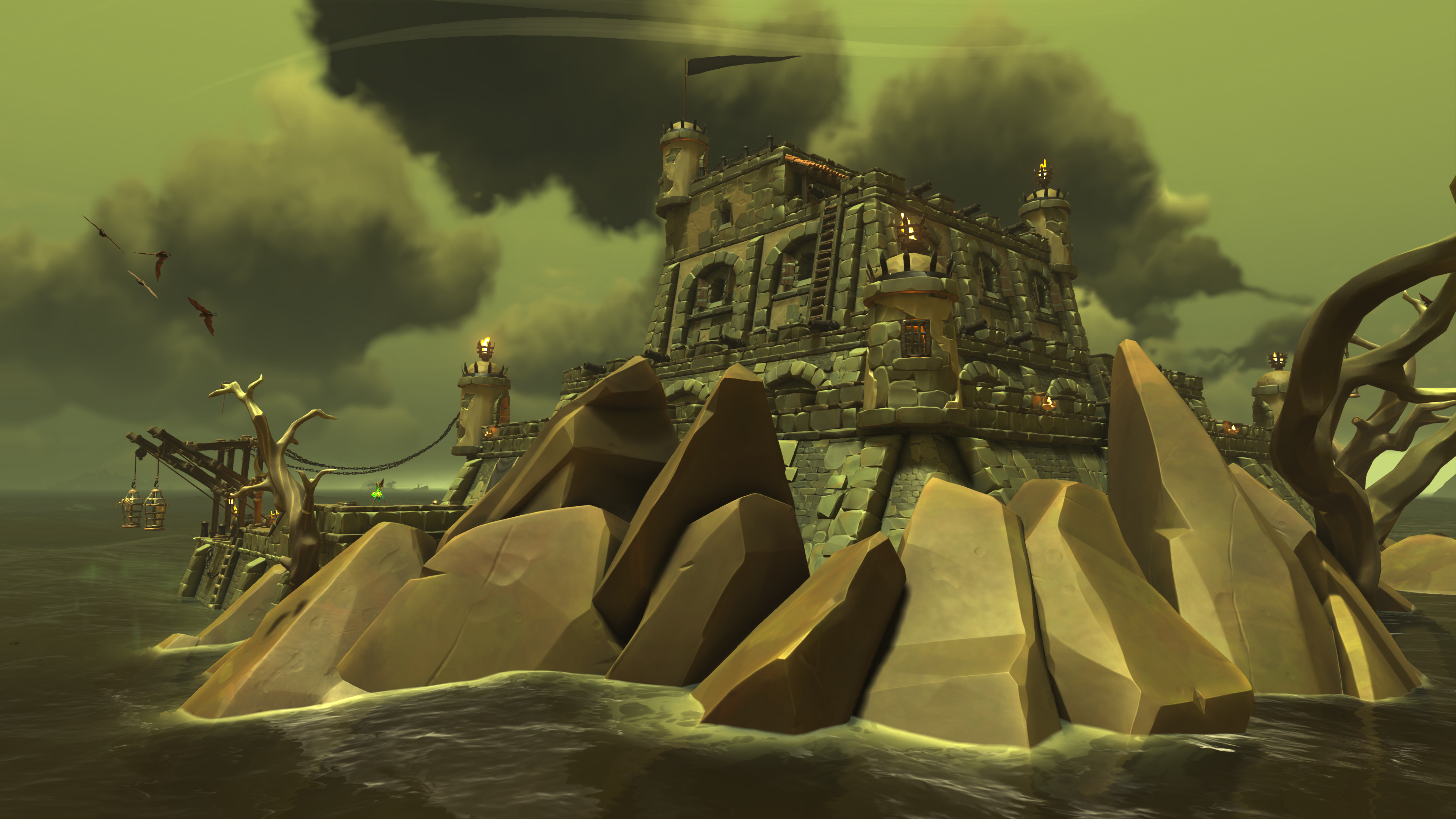 Sea Forts take just a fraction of the time to beat as compared to Skeleton Forts.

This added loot is meant to tease you with a tough decision: Take what you can quickly, or stick around for added treasures, daring other players to interrupt you and snatch your booty? The choice is yours. Whatever you decide, the most important thing is to dock your ship close to the Fort. Compared to the Forts of old, there are fewer cannons set to fire at you as you approach, but from the right angle, they may still devastate your hull.

Your best bet is to dock right up against the sea gate you’ll find on one side of the Fort. Here, cannons can not be angled to reach your ship. Once you get inside and head downstairs, you’ll be able to open this gate using a pulley system, which makes moving loot from the treasury to your ship much quicker than you may be used to at the game’s legacy Skeleton Forts.

Phantoms are vulnerable to all types of attacks, but seem especially weak to firebombs. If you’re not liable to hit your allies with them, you’ll make quick work of the ghosts using Sea of Thieves’ hottest throwable.

Meanwhile, a third locked door, the prison cell, demands a third key, but so far, no one has found this key. Conventional wisdom suggests these prison cells will factor into a future Adventure, Sea of Thieves’ new time-limited story chapters. The first of those modes launched in February and told a tale of Flameheart’s resurgence. As the prison cells on Sea Forts clearly hold some occult items inside of them–and no apparent loot–it’s likely these cells also tie into the story. In short, there is no Prison Cell Key yet. The next Adventure, Forts of the Forgotten, should reveal this elusive key later this season.

There are five Sea Forts in the open world of Sea of Thieves currently, and they’re pretty well scattered across the entire map. You can find Sea Forts, labeled as “Fortresses” on your map, at the following map grid locations:

Sea Fort difficulty, like other activities in the game, scales to your crew size. That means that even though the task of loading all your riches may still take a while in solo mode, the enemies being thrown at you will be designed to challenge you, but not feel insurmountable.