Starting with 2010’s Castle Ravenloft, Wizards of the Coast have been putting out a steady stream of high-quality board games in the Dungeons & Dragons franchise. Most have been exactly the kind of fun adventure or conquest titles you’d associate with the license. But the range also includes a couple of deeper strategy titles, including 2016’s Tyrants of the Underdark (see it on Amazon).

Players represent noble houses of dark elves, spreading their malicious influence through the dark underworld caverns. To do this they build up their own deck of cards by buying new ones from a face-up selection, a mechanic known as deck-building. Now the game is back in a spanking new edition that includes the Aberrations & Undead expansion, giving you even more cards to play with.

What’s In The Box

The original edition came with miniature plastic shields to represent your forces on the board. These have been replaced here by cardboard discs. It’s a minor loss which leaves the game a little less visually spectacular but a lot more compact and affordable.

The board the tokens go on is plain but functional, showing a series of interconnected areas via the medium of lines and circles. Everything is purple, black, and white, which is thematic but can make things hard to distinguish. There are also four player boards and a market board to hold stacks of cards.

Beneath the board are lots of cards, also with purple backs and unnecessarily emblazoned with the word "Minion." However, the game excels with the card fronts on which all the information is laid out clearly around some classic Dungeons & Dragons art. With the game’s long history there’s plenty of fantastic art for all the people and monsters depicted in the game, and full use is made of the back catalogue to bring proceedings to life.

Rules And How To Play 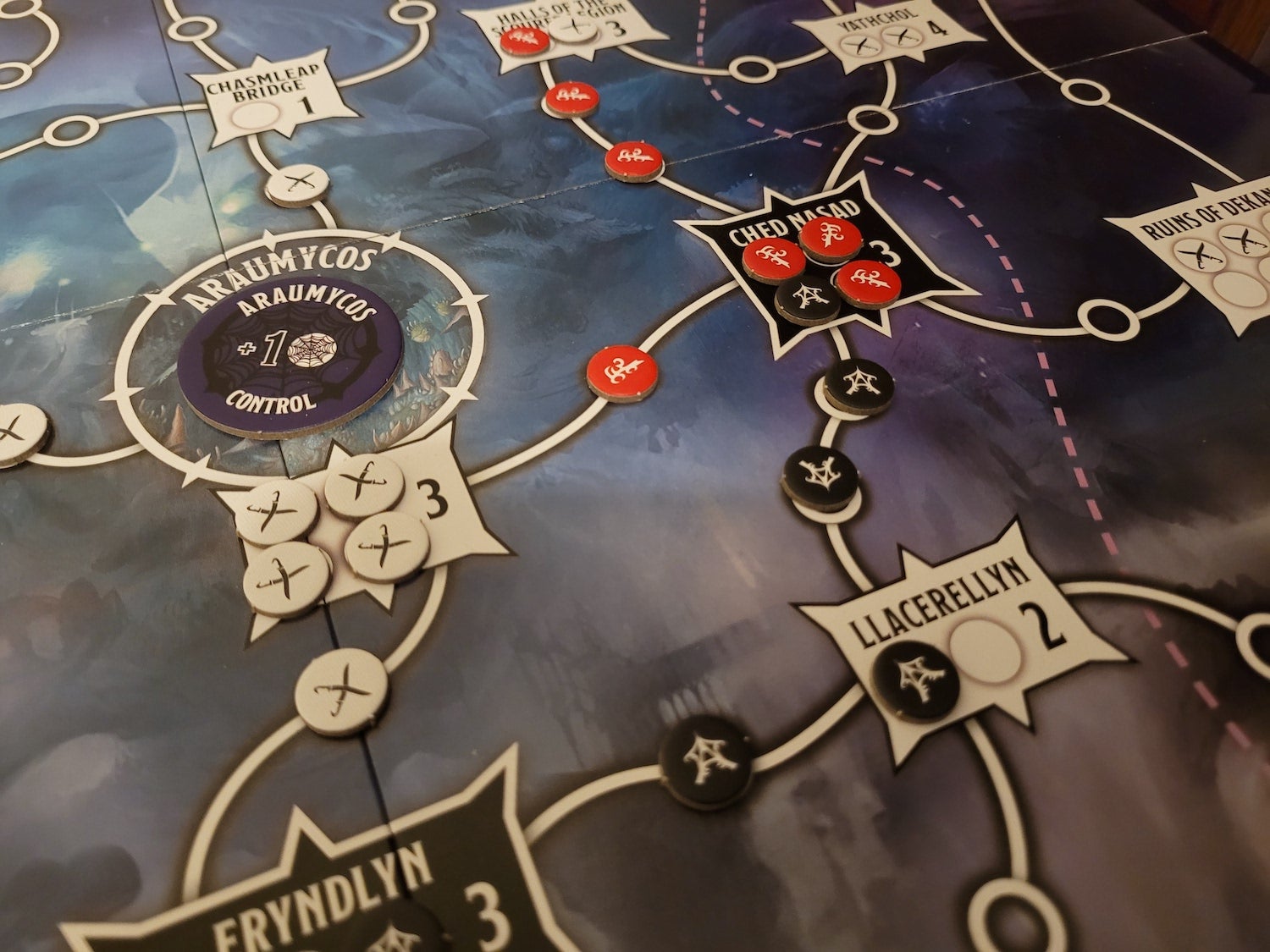 On your turn, you draw and play five cards from your deck. The majority provide either influence, which you can use to buy more cards to add to your deck, or power, an abstraction of military prowess. One power can be spent to deploy a token to an area adjacent to an existing token. Three will let you destroy an adjacent enemy token, either from an opposing player or one of the white “neutral” tokens that litter the board in the beginning. It’s a compact, accessible framework.

Your goal in doing so is to have a majority of troops in key locations that will score you points at the end of the game. Some of these represent major cities which will net you bonus influence or even points as soon as you take control. Needless to say, these are hard to gain purchase in, and hotly contested. You’ll stretch your soldiers out from a start point, balancing controlling locations with speed of spread, racing your opponents to choke points. There’s real tension in waiting to see how the map will change before your turn comes round. 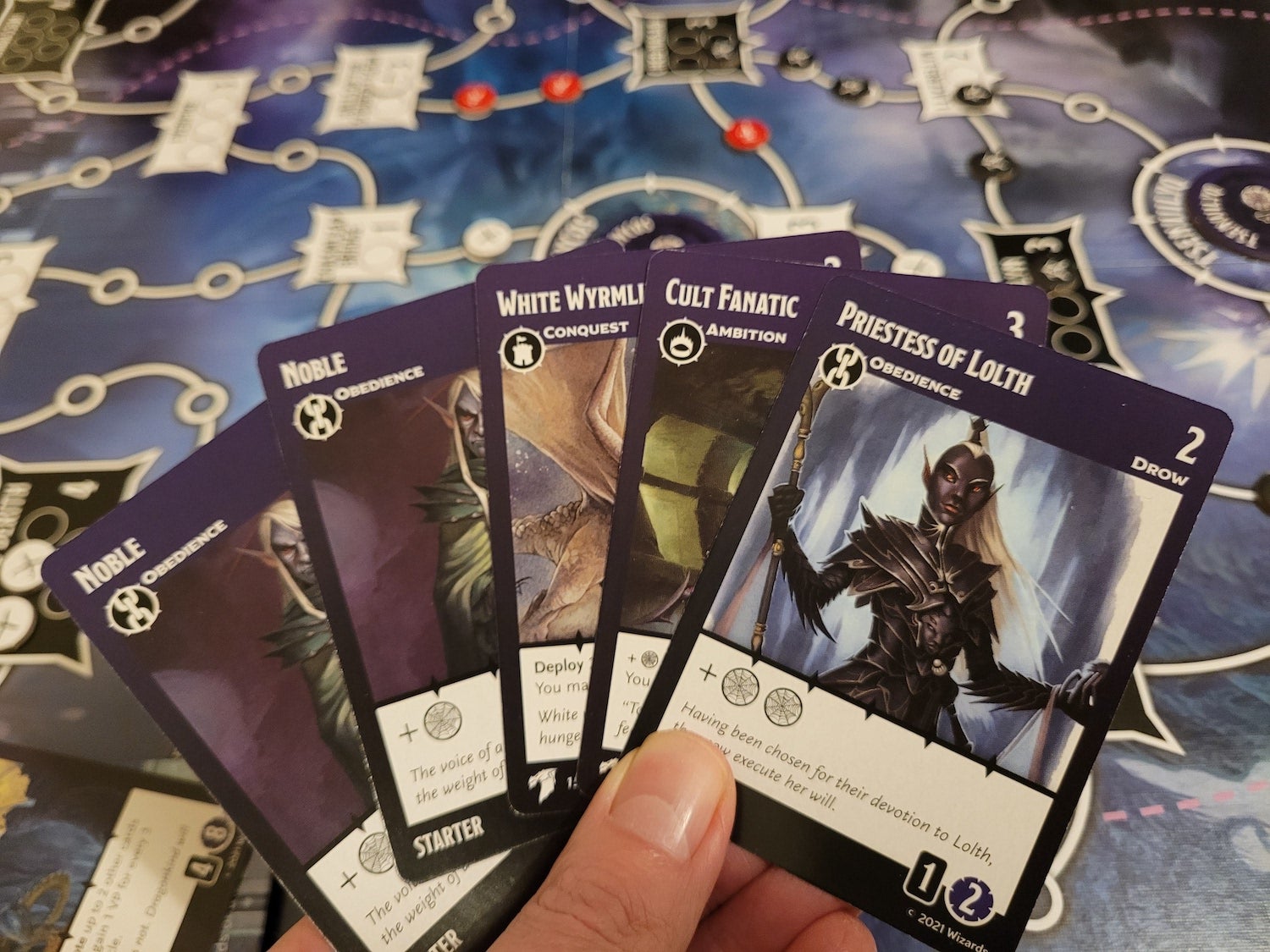 The secret to Tyrants of the Underdark’s success is that location points are only one possible source of points. You can also score by knocking out enemy tokens and by the action of some cards. Indeed, the cards themselves are also worth points when the game ends. Instead of destroying cards from your deck, like most deck builders, here you “promote” them which gets them out of your deck and set to one side, making them worth additional points in the final tally.

Together, these straightforward concepts provide a dizzying array of methods to approach the game. At one extreme you could go all-out conquest, stuffing your deck with military cards and hoping to overwhelm your rivals before their strategies can get going. Running out of tokens ends the game, making this a viable tactic. On the other, you might ramp up your influence to gain more and more powerful cards, levering promotions and points to compensate for a weak map presence.

There’s real tension in waiting to see how the map will change before your turn comes round.

In practice, your choices are steered by the random selection cards available to buy on your turn, forcing you to dabble in the game’s various machinations. It’s a potent recipe, making you think on your feet, upping the ante as each new card becomes available, while still allowing you to decide how to shape your strategy. No two games are going to play out the same and your potential route to victory will be different each time. At the same time, the random deal can sometimes leave you short of workable choices or deliver a killer combo to an opponent.

Many cards extend the basic formula of influence and power. And a good job too, as the back and forth of kicking off an enemy unit, then adding one of your own, only to see an opponent repeat the moves, can get a little wearing. Most common are those that bring spies into the mix, units that can be placed anywhere on the board, then sacrificed later for a powerful bonus. 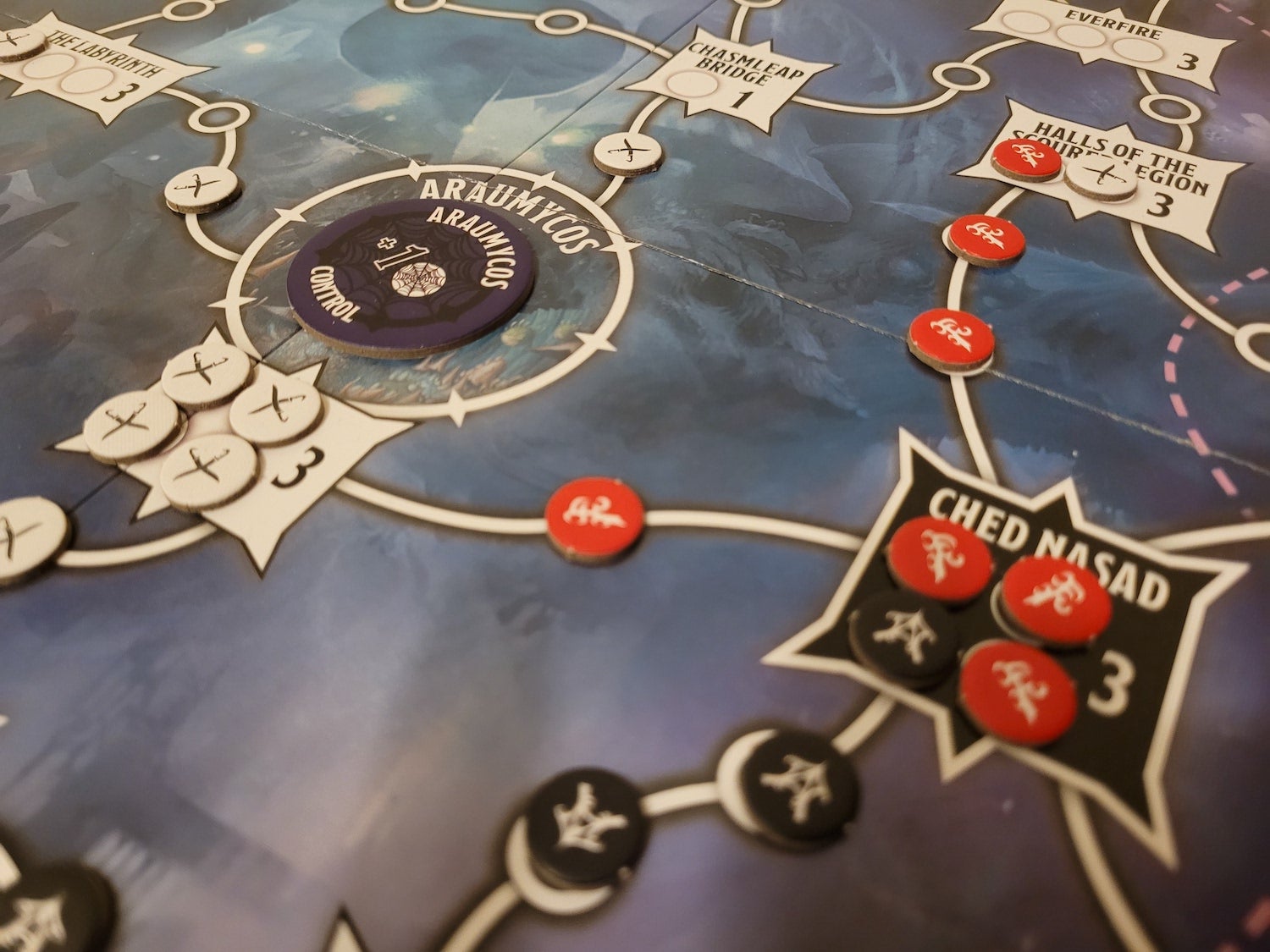 But this is a Dungeons & Dragons game, and the cards represent the breadth of that famous game’s world-building. Each game has two half-decks to source cards for the players to buy: the rules suggest you start with Dark Elves and Dragons. They chime in with the game’s core mechanics: the former tend toward providing influence and opportunities to promote your cards, whereas the latter deal more in raw power. They run the gamut from feeble underlings to mighty Drow Matriarchs and Ancient Wyrms, hugely satisfying to add to your deck and play.

These are only two of the possible ways to build the market. Other half decks include Demons, which you can buff by sacrificing your own cards, and Elementals whose Focus keyword lets you stack related cards for big bonuses. The two half-decks from the Aberrations & Undead expansion included here are less well-differentiated but still lots of fun to play with. And each is packed with iconic monsters from the role-playing game’s bestiary to recruit and serve your cause.

No two games are going to play out the same.

Tyrants of the Underdark has an MSRP of $74.99 and is available at a handful of retailers.