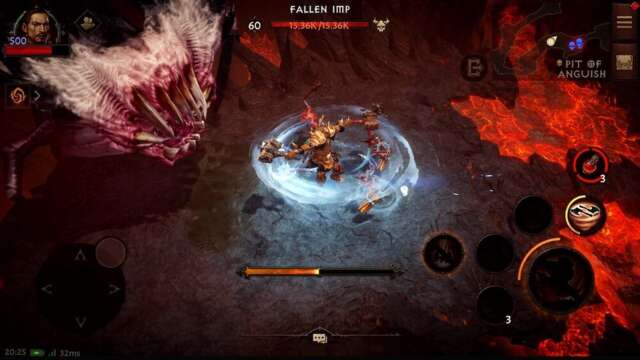 When it comes to picking the best phone controller for you, there are a lot of different choices to consider, from official pads that require mobile controller clips to third-party ones that don’t. Fortunately, you probably already own a great controller that’ll work with your phone, as both the official Xbox Wireless Controller and PS5 DualSense can be connected to an Android phone or iPhone via Bluetooth. Still, you may want to consider a mobile controller that’s specifically designed for gaming on a phone such as the Backbone One or Razer Kishi.

There’s a lot of variety here–some controllers connect directly to your phone’s USB-C port, while others are Bluetooth-enabled. Some mobile controllers clip onto either side of your phone to resemble the Nintendo Switch’s Joy-Cons, while others feel similar to a traditional console controller with a phone clip at the top. Whether you need an Android or iPhone controller, you’ll find something to suit your needs here. If you’re playing Diablo Immortal on a tablet, we recommend a conventional gamepad such as the DualSense or Xbox Wireless Controller. 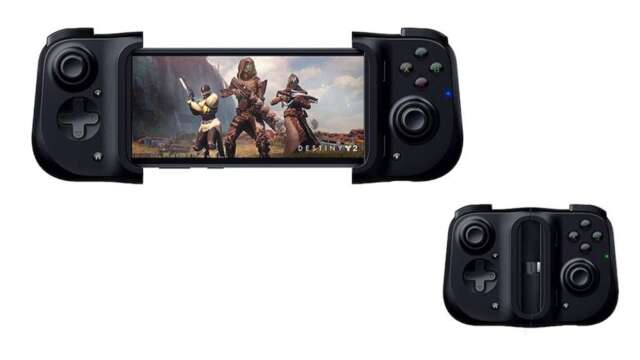 Razer’s latest phone controller turns your phone into something that looks more like a Nintendo Switch, and it’s compatible with a large number of phones. While Razer’s other phone controllers connect via Bluetooth, the Razer Kishi plugs directly into your phone’s USB-C port (or Lighting port for iOS). All you need to do is adjust the strap, plug your phone into the Kishi, and start playing. The Kishi doesn’t require charging and runs off of your phone’s battery. Thankfully, it has a port of its own that allows for the charging of your phone while you’re playing.

The Kishi has the same capabilities of a traditional console controller, including analog triggers. The buttons and D-pad aren’t as satisfying to press as the Razer Junglecat, feeling a little mushy, but they still work well with every game. The Razer Kishi’s analog sticks also feel more similar to a standard controller, making them a bit more accurate and comfortable. The Kishi doesn’t feel quite as premium as Razer’s other gamepads, but overall, it’s still the best phone controller we’ve tested for its features and compatibility. Be sure to choose the correct style you need–iPhone or Android–before buying. 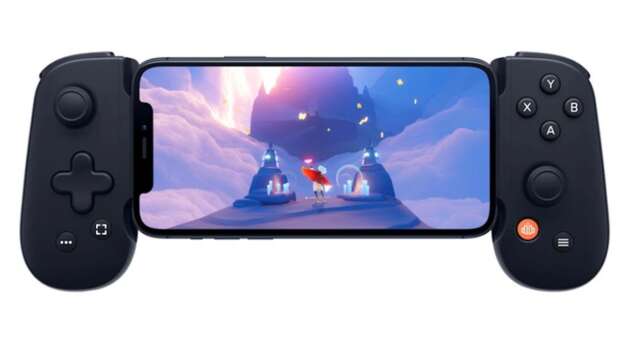 Best way to turn your iPhone into a Switch

Backbone One is built for iPhones, and like the Razer Kishi, it turns your phone into something resembling a Nintendo Switch. As a result, it shares many of the Kishi’s same smart and forward-facing features, like a port for low latency play (instead of Bluetooth), a passthrough port for charging while you play, and solid controller design across the board. Since it’s designed just for iPhones, the tight spring-loaded mechanism fits snug and secure. But the real secret sauce for Backbone One is the dedicated Backbone app.

The app wrangles all of your favorite games into a single interface that looks similar to what you’d find on Xbox or PlayStation, with big bold icons and the ability to add any other games in your collection simply by pressing the Backbone button from within them. The face buttons also allow you to quickly record screenshots or gameplay clips and share them with the Backbone community, and the app serves as a hub for other popular video highlights. The whole experience feels much more elegant than flipping through your apps manually, and it makes turning your iPhone from everyday use to “game mode” a more cohesive transition. Check out our Backbone One review for more details. 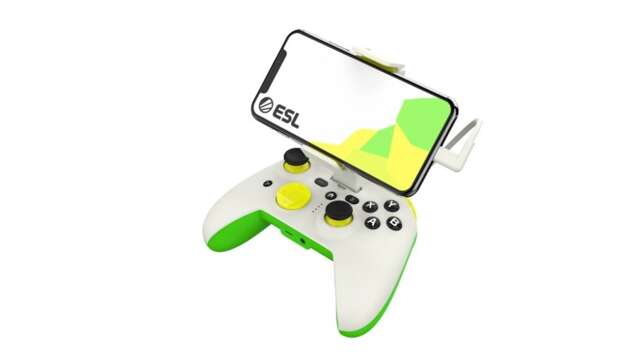 If you’re looking for a traditional controller for iOS, RiotPWR’s newest controller is your best bet. The RiotPWR ESL has a striking white/green/yellow color scheme and retains the familiar layout of the Xbox controller.

The difference here is that RiotPWR has added dedicated buttons aimed for mobile functionality with iOS, including a share button for streaming and capturing gameplay and compatibility with Ludu Mapp.

The controller charges connects to your iPhone via the Lightning port and has a headphone jack as well, so you can easily use your favorite wired gaming headsets. While some users may prefer Bluetooth controllers, the RiotPWR ESL’s wired connection helps to eliminate input lag.

The included clip attaches into the faceplate of the controller and provides a sturdy holder for your iPhone, making the RiotPWR ESL an excellent all-in-one bundle for mobile gaming. 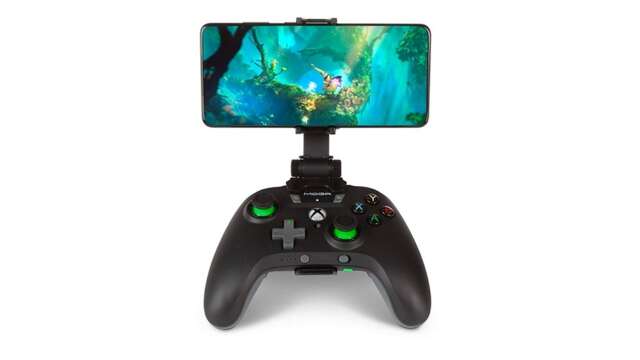 Android owners looking for an affordable controller for Xbox cloud gaming need look no further than PowerA’s MOGA XP5-X. It looks and feels just like a standard Xbox Wireless Controller, includes a dock for your phone, and connects to your phone via Bluetooth or USB-C. Oh, and it’s officially licensed by Xbox for use with Game Pass streaming.

The XP5-X also features Advanced Gaming Buttons that can be mapped as you see fit as well as an integrated power system that charges easily and quickly via a USB cable. The XP5-X is the closest mobile-focused controller that isn’t the actual Xbox controller available for phones right now, and it’s usually on sale on Amazon, making it one of the most affordable options on this list. 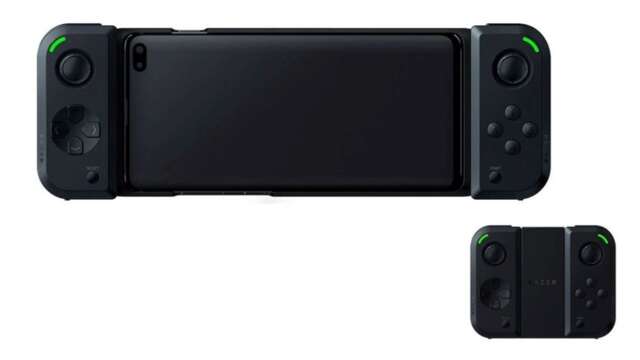 Unlike the Razer Kishi, which connects to your Android phone via the USB-C port, the Razer Junglecat controllers clip into the sides of its phone case (much like the Switch’s Joy-Cons), then connect via Bluetooth. After the first time you connect them to your phone, it’s quick and easy to reconnect them.

The Razer Junglecat phone controllers feel very similar to Joy-Cons, especially the analog sticks that resemble what we see on the Switch. The D-pad is more similar to the DualShock in shape, though it is segmented into four different buttons. These buttons are satisfyingly clicky, as are the bumpers and triggers. They’re a little tricky to get used to–and unfortunately, the triggers aren’t analog–but once you become accustomed to the smaller size, they’re an incredible portable controller option.

While the Junglecat controllers can connect to any compatible device, they only come with cases that fit a limited number of phones, making them harder to recommend than the Kishi. 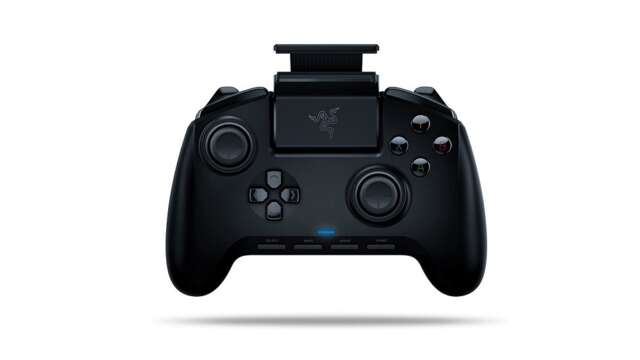 Razer’s Raiju Mobile is an Elite-style controller that has a phone clip built into its chassis. The clip is adjustable and holds your phone in place while the Raiju Mobile connects via Bluetooth. This is an excellent all-in-one option that feels solid enough to survive commutes and road trips. The controller works well on PC, and it’s just as delightful when connected to an Android device. However, the built-in phone clip may be a bit annoying when you use this controller on PC.

In addition to the basics, you’re able to customize the included back paddles and extra shoulder buttons. You can remap any function on the controller to these buttons, making it easy to keep your thumbs on the sticks when you need to reload or perform another action. You can also activate the trigger stops to shorten the throw of the Raiju Mobile’s triggers. 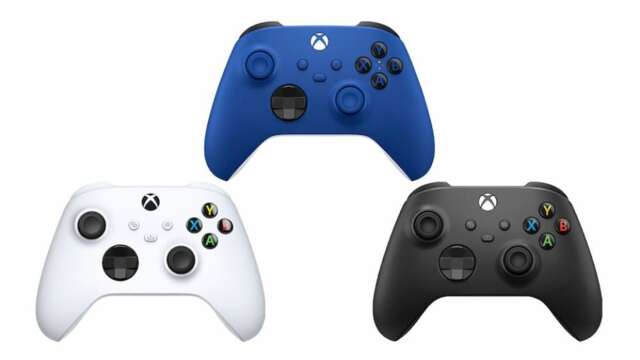 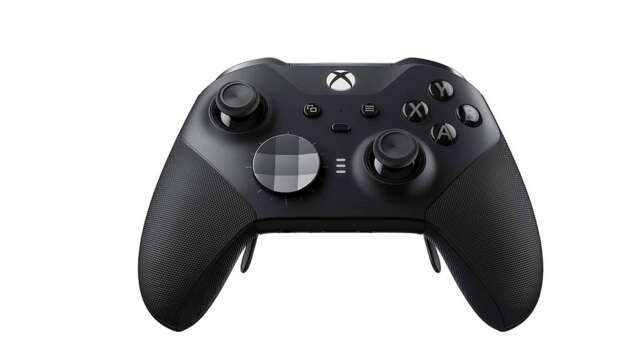 The Xbox Elite Series 2 controller has the most premium feel of any controller out there with its incredible build quality, clicky home button, and excellent hand and trigger grips. It’s probably the best wireless controller around, featuring two different trigger stop positions, a number of interchangeable back paddles and parts, and adjustable analog stick tension–perhaps my favorite aspect of the controller is the included Xbox 360-size thumbsticks. The Elite Series 2 pad also features three profiles that you can save your back paddle’s mappings to, making it easy to change on the fly when you switch between games.

Unfortunately, it can be easy to lose the interchangeable thumbsticks, making it a risky option for bringing with you on the go. Despite this, the Xbox Elite Series 2 controller is one of the best controllers I’ve ever used, and thanks to its Xbox Series X compatibility, it’s one that’s well worth buying. You may just not want to bring it with you on your commute. 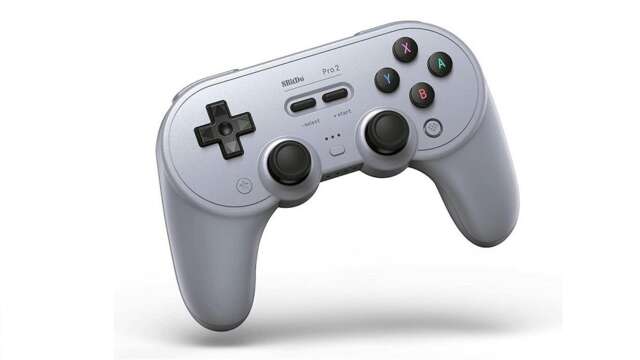 8BitDo’s Pro 2 Bluetooth controller is an evolution of the company’s SN30 Pro and Pro+ controllers. Its build is a cross between a classic SNES controller and a PlayStation DualShock controller, but despite looking like a controller from the old days, the 8BitDo Pro 2 connects seamlessly with your iPhone or Android phone to play any mobile game. It’s also a fantastic (and affordable) Switch Pro Controller alternative, letting you easily switch between playing on your phone and on your Switch while on the go.

The 8BitDo Pro 2’s accompanying software allows for full button mapping–letting you customize the controls to your heart’s content–while the two “pro” buttons on the back of the controller offer even more control when in the middle of a tough battle. 8BitDo’s Bluetooth controllers have earned a reputation for being top-of-the-line, and the Pro 2 is no exception. However, one downside is that the phone clip isn’t included with the 8BitDo Pro 2, so if you’re specifically buying it to play on your iPhone or Android device, you’ll have to buy that clip separately for $15. Note that while it’s compatible with Nintendo Switch and PC, you can’t use this controller on PlayStation or Xbox consoles. 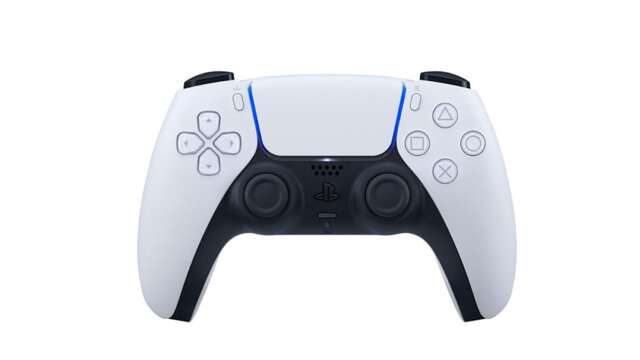 If you already have a PS5 DualSense controller and are wondering why you can’t just use that with your phone, good news–you can! The DualSense will connect to any iOS 14.5 phone or Android phone via Bluetooth. The haptic feedback and other advanced features might not work the same as they do on the PS5, but it’s still the same DualSense controller that PS5 owners know and love. Of course, you’ll still have to pick up a phone clip for the best experience with cloud gaming.

The DualSense only takes seconds to connect via Bluetooth, then you’re gaming on your phone the same way you do on your PS5. Connecting the DualSense back to your console is a breeze as well–simply re-sync the controller with the PS5 via the charge cable when you’re done, and you’re back in business. The DualSense is now available in six colors: white, Midnight Black, Cosmic Red, Galactic Purple, Nova Pink, and Starlight Blue