Gunborg: Dark Matters is a straightforward game. You run, jump and fight, taking out enemies as you look to capture targets on a ship. Each level of this platformer is relatively short, but the difficulty gradually ramps up as new enemies appear, and face boss fights to test what you’ve learned so far.

You start off with a laser sword and a shield to fend off attackers, and they will remain your base loadout throughout Gunborg. The sword is good at taking out small enemies quickly, and some big enemies if you get in close enough to interrupt their attack animation, while the shield can deflect incoming projectiles. However, the shield is not invulnerable and can only take a few hits before needing a recharge. It is also not permanent even without taking damage, only lasting a little while before needing a quick charge to be used again. You will likely mistime some moments when using it and die as a result, but practice will eventually help you work out when to attack and when to defend.

Guns are not something you will be equipped with by default. Instead, you will have to pick up the guns your enemies drop and use those. You can only carry one gun at a time, and it will have limited ammo. That means Gunborg becomes a game in which you are constantly switching to different weapons, dependant on what enemies are carrying. These could be rifles, pistols with homing bullets, a flame thrower, or a laser cannon to name a few. If you rack up enough kills and get the combo multiplier up then you will unlock Dark Matter mode which makes your weapons more powerful for a time – this is especially useful in the more crowded later levels.

The platforming is pretty solid and generous, thanks in part to having a jetpack that grants you a quadruple jump. You’ll need it, because the jumping isn’t always as tight and precise as you might want it to be, but mainly because the levels you face are filled with traps. There’s lasers that will block paths and even chase after you in some levels, walls, floors and ceilings that are covered in spikes, and so on. In my opinion, this trap gets used a bit excessive, especially when they feature in boss battles and are already dealing with a number of other threats to keep an eye on. This often forces you to slow down, when the action should be fast and furious.

The levels are linear but have a few detours to collect infobots. These add to your final level score and rank. Collect enough of them and you can unlock a higher difficulty as well as a few bonus missions. Gunborg: Dark Matters does get progressively more difficulty especially in the final levels, where waves of enemies are thrown at you before the final boss.

The amount of hits you can take depends on the difficulty you have chosen. For example, with normal difficulty you can take three hits before death, while on easy that is increase to four. Through the final section especially, luck plays into your success, as explosives sent out by enemies can take out their own allies. With so much going on at once, Gunborg really does make you depend on your reflexes. Death will happen often but the checkpoint system is very generous and you’ll be back in the same place within seconds. 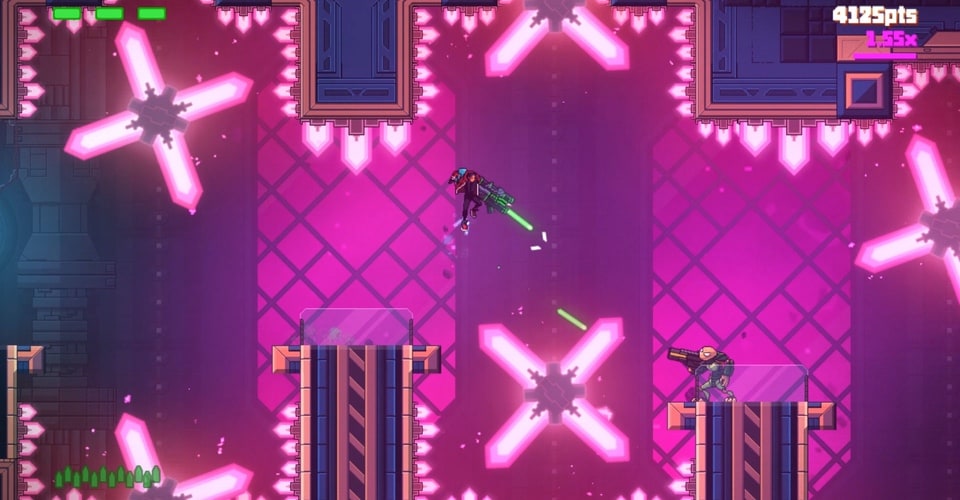 Gunborg: Dark Matters art style is colourful and bright, with enemy designs distinctive so you can easily tell what kind of weapons they are armed with, and how to combat them. The platforming is also well pathed and clear to understand, even if they can hard to actually get past. The music is decent too with synthwave being the music choice, though a little more variety with bosses would have been cool.