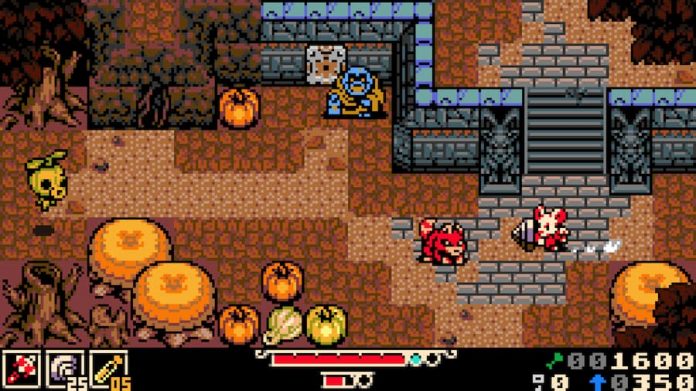 Mina the Hollower, from the makers of Shovel Knight has a Kickstarter and.. oh, it’s already beaten it.

That’s not entirely surprising, given that Shovel Knight was one hell of a game, a platforming throwback to the 8-bit age. We reviewed it back in 2015, calling it “.. a slice of old-school platforming action at its best”. Mina the Hollower, though not a sequel, sports the same retro aesthetic and looks set to be funded many, many times over.

Mina the Hollower casts you as the titular Mina who, as a “Hollower” investigates the Earth and definitely, honestly, doesn’t plunder its resources for shadowy guild. She’s a mouse, as you might have noticed, and isn’t beyond kicking bottom to defend herself. Unlike Shovel Knight, her game is a top-down outing and promises to be a “bone-chilling ode to handheld games”.

Developers Yacht Club Games say their reason for using Kickstarter is that “Though we’re financing a majority of this project ourselves, we hope we can create a more expansive game this way.” And, based on how things have gone so far, they’ll have no problems. The Kickstarter has exceeded its £230,401 goal in just one day.

You can back the Mina the Hollower Kickstarter here; reward tiers include physical copies, plushes, art books and more. It’s set to arrive on PC via Steam and you can wishlist it here. Yacht Club Games has yet to confirm a release date or which other platforms it’ll be landing on.

However,  the Kickstarter suggests Yacht Club Games are aiming for a December 2023 release at the latest. And while the page states “game platforms & product mockups not final”, they’re planning on getting the game onto PlayStation 4, PlayStation 5, Nintendo Switch, Xbox One and Xbox Series X|S. With the amount of money they’ve raised in one day, we doubt they’ll have a problem delivering.