In women’s tennis right now, there is Iga Swiatek and there is everybody else.

And none of the rest are in particularly good form, which makes it no surprise that the world No. 1, top seed, and defending Italian Open champion is the overwhelming favorite to take the title.

The main draw begins Monday, May 9.

A year ago, Swiatek was only the No. 15 seed. Other than a tournament win in Adelaide – exceptionally, held after the Australian Open instead of leading into it – she hadn’t had any sort of a run.

And she won it all, dropping just a single set along the way and double-bageling Karolina Pliskova in the final (6-0, 6-0).

This year, she comes in on a 23-match winning streak, with four straight titles.

The Polish star has No. 5 seed Anett Kontaveit and No. 16 Victoria Azarenka in her quarter of the draw. Neither has done a thing lately.

The most intriguing potential opponent is the winner of a popcorn first-round clash between the 2019 and 2021 US Open champions – Bianca Andreescu and Emma Raducanu.

Both are making their Rome debuts. 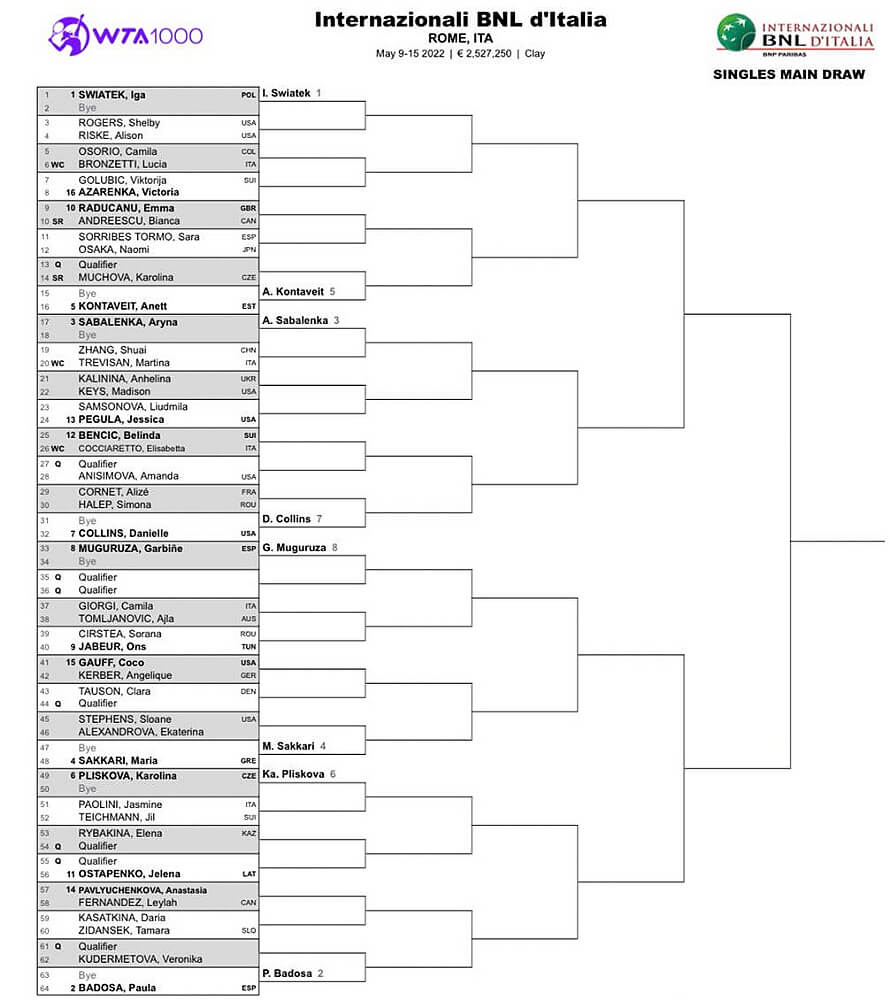 No. 3 Aryna Sabalenka and No. 8 Danielle Collins are the other big seeds in her half. Again, neither has done much of anything lately.

Two of the most-experienced players in the draw – 2019 champion and last year’s runner-up Karolina Pliskova, and three-time semifinalist Garbiñe Muguruza – have been mostly MIA in 2022.

It’s hard to see where the traps are for Swiatek to not at least make the final.

What Can Simona Halep Do?

This is Simona Halep’s 12th appearance in Rome.  She won it once, and lost two finals to the absent Elina Svitolina.

Halep has looked rejuvenated the last few months. She says she’s invigorated by a new coach in Patrick Mouratoglou and a new training setup at his academy. Though she is not seeded here, she will be a real threat.

Halep is in the Sabalenka-Collins section, with a possible third-round match against Belinda Bencic. She has a decent road to the semis. Beyond that, she’d likely have to get through Swiatek.

The first round in Rome, which gets underway Monday, May 9 at 5:00 am ET, contains some heavyweight matchups.

It’s been … a time for both since their precocious titles. But it’s telling that, at 21, this will be the first time Andreescu has been healthy enough to even play Rome.

It’s also the first time for Raducanu, who has even less experience at the WTA level on clay. But she’s learning quickly.

Definitely the most-intriguing match in the first round, with Raducanu (-120)the slight favorite over Andreescu (-105).

Despite all the positive talk about working on mastering the clay, Osaka pulled up with an Achilles issue after just one match win in Madrid.

So Osaka gets an opportunity for immediate revenge.

But there aren’t many indications that she will manage it – especially with the conditions being a lot slower in Rome – even if you wouldn’t expect the same score.